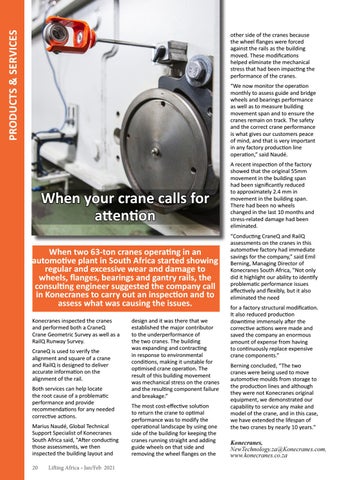 other side of the cranes because the wheel flanges were forced against the rails as the building moved. These modifications helped eliminate the mechanical stress that had been impacting the performance of the cranes. “We now monitor the operation monthly to assess guide and bridge wheels and bearings performance as well as to measure building movement span and to ensure the cranes remain on track. The safety and the correct crane performance is what gives our customers peace of mind, and that is very important in any factory production line operation,” said Naudé.

When your crane calls for attention When two 63-ton cranes operating in an automotive plant in South Africa started showing regular and excessive wear and damage to wheels, flanges, bearings and gantry rails, the consulting engineer suggested the company call in Konecranes to carry out an inspection and to assess what was causing the issues. Konecranes inspected the cranes and performed both a CraneQ Crane Geometric Survey as well as a RailQ Runway Survey. CraneQ is used to verify the alignment and square of a crane and RailQ is designed to deliver accurate information on the alignment of the rail. Both services can help locate the root cause of a problematic performance and provide recommendations for any needed corrective actions. Marius Naudé, Global Technical Support Specialist of Konecranes South Africa said, "After conducting those assessments, we then inspected the building layout and 20

design and it was there that we established the major contributor to the underperformance of the two cranes. The building was expanding and contracting in response to environmental conditions, making it unstable for optimised crane operation. The result of this building movement was mechanical stress on the cranes and the resulting component failure and breakage.” The most cost-effective solution to return the crane to optimal performance was to modify the operational landscape by using one side of the building for keeping the cranes running straight and adding guide wheels on that side and removing the wheel flanges on the

A recent inspection of the factory showed that the original 55mm movement in the building span had been significantly reduced to approximately 2.4 mm in movement in the building span. There had been no wheels changed in the last 10 months and stress-related damage had been eliminated. “Conducting CraneQ and RailQ assessments on the cranes in this automotive factory had immediate savings for the company,” said Emil Berning, Managing Director of Konecranes South Africa, "Not only did it highlight our ability to identify problematic performance issues affectively and flexibly, but it also eliminated the need for a factory structural modification. It also reduced production downtime immensely after the corrective actions were made and saved the company an enormous amount of expense from having to continuously replace expensive crane components.” Berning concluded, “The two cranes were being used to move automotive moulds from storage to the production lines and although they were not Konecranes original equipment, we demonstrated our capability to service any make and model of the crane, and in this case, we have extended the lifespan of the two cranes by nearly 10 years."