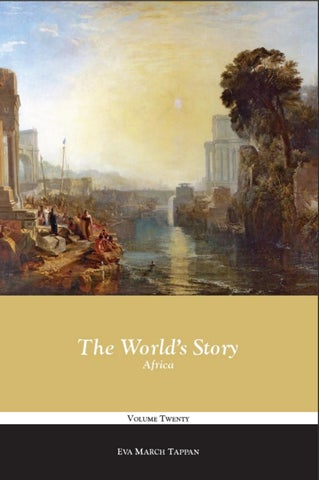 The Worldâ&amp;#x20AC;&amp;#x2122;s Story A History of the World in Story, Song and Art Volume 20 Africa Edited by Eva March Tappan

CONTENTS NORTHERN AFRICA I. LEGENDARY HISTORY AND THE STORY OF CARTHAGE ULYSSES IN THE LA:ID OF THE LOTUS-EATERS (TRIPOLI)

From &quot;The Odyssey of Homer&quot;; translated by George Palmer IENEAS AT CARTHAGE

THE CUTTING OF THE AQUEDUCT

THE FALL OF CARTHAGE

From &quot;Lords of the World.&quot; II.

LIFE AND CUSTOMS IN NORTHERN AFRICA

How THE BARBARY PIRATES LEARNED TO RESPECT THE AMERICAN FLAG

From &quot;History of the People of the United States.&quot; TRADITIONS OF THE SHEIKHS OF l\loRocco

From &quot;The Sheikhs of Morocco in the Sixteenth Century.&quot;

THE GREAT .MARKET OF TRIPOLI

III. THE MYST ERY OF THE DESERT

THE HOUR OF PRAYER IN THE DESERT THE OASIS OF THE GREAT-GRAKDFATHER THE l\!USIC OF THE DESERT

From &quot;The Voice of the South.&quot;

WESTERN AND CENTRAL AFRICA I.

WRITING A CHAR:lt . . A ZEALOUS MISSIONARY •

A VISIT TO KING MOSELEKATSE

II. ADVENTURES IN THE AFRICAN JUNGLE THE VILLAGE OF DWARFS • • • . From &quot;The Country of the Dwarfs.&quot;

Paul du Chai llu 163 CROSSING AN AFRICAN BRIDGE CONSULTING THE l\IAN IN THE l\loON Paul du Chai //u 168 Du CHAILLU THE FIRST, KING OF THE APING! Paul du Chaillu 172 From &quot;Lost in the Jungle.&quot;

NORTHERN AFRICA I LEGENDARY HISTORY AND THE STORY OF CARTHAGE

HISTORICAL NOTE to legend one Pygmalion of Tyre murdered the husband of his sister Dido. By this crime he had e:),,_-pected to become master of the vast wealth of his brother-in-law; but Dido, seizing her husband&#39;s treasure, fled with many followers to northern Africa, near where Tunis now stands. She asked the nati\·es for as much land as a byrsa, that is, a bull&#39;s hide, would inclose. They agreed, and the wily Phccnicians cut the hide into strips, and upon the ground which these could be stretched to inclose they built a citadel and named it Byrsa in memory of the act. This was the beginning of Carthage, which became the greatest city of northern Africa. It is thought to have been founded about ACCORDING

While the city was yet young, lEneas and his companions, refugees from the downfall of Troy, landed on the Cartha­ ginian coast and were received by Queen Dido with all honor. When, after enjoying her hospitality for many months, /Eneas refused her hand and sailed away in search of the Hesperian Kingdom which had been promised him by the gods, Dido threw herself upon a funeral pile, and there met her death. Such is the early story of Carthage, a mingling of fact and legend. The wonderful growth of the city is not legend, however; for it not only extended its dominions in northern Africa, but also won holdings in Sicily, Sardinia, Corsica, and Spain. Its greatness aroused the jealousy of Rome, and in 146 n.c., after three bitter wars, it was leveled with the ground. Julius C.£sar planned to restore it; and this plan was carried out by Augustus in 29 B.C. The new city became large and prosperous. In 439 A.D. it was made the capital of the kingdom of the Vandals, but was conquered by Belisa­ rius a century later. In 647 the Arabs destroyed it, and now only a few ruins remain. 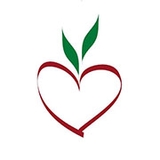