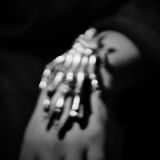 Libby Sacer remained unknown up until her death in 2013. Since then, a series of discoveries started that concern the art, philosophy and politics of a period that spans for over half a century, implying a crucial involvement on Sacer’s part. The group Libby Sacer Foundation, was founded in January 2014. Inspired by Libby Sacer, the group has opened up a dialogue with our origins and ‘ghosts’ through curating and presenting a wide range of events such as public talks, exhibitions, performances