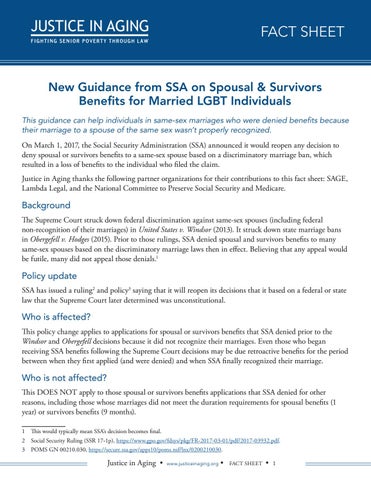 New Guidance from SSA on Spousal & Survivors Benefits for Married LGBT Individuals This guidance can help individuals in same-sex marriages who were denied benefits because their marriage to a spouse of the same sex wasn’t properly recognized. On March 1, 2017, the Social Security Administration (SSA) announced it would reopen any decision to deny spousal or survivors benefits to a same-sex spouse based on a discriminatory marriage ban, which resulted in a loss of benefits to the individual who filed the claim. Justice in Aging thanks the following partner organizations for their contributions to this fact sheet: SAGE, Lambda Legal, and the National Committee to Preserve Social Security and Medicare.

Background The Supreme Court struck down federal discrimination against same-sex spouses (including federal non-recognition of their marriages) in United States v. Windsor (2013). It struck down state marriage bans in Obergefell v. Hodges (2015). Prior to those rulings, SSA denied spousal and survivors benefits to many same-sex spouses based on the discriminatory marriage laws then in effect. Believing that any appeal would be futile, many did not appeal those denials.1

Policy update SSA has issued a ruling2 and policy3 saying that it will reopen its decisions that it based on a federal or state law that the Supreme Court later determined was unconstitutional.

Who is affected? This policy change applies to applications for spousal or survivors benefits that SSA denied prior to the Windsor and Obergefell decisions because it did not recognize their marriages. Even those who began receiving SSA benefits following the Supreme Court decisions may be due retroactive benefits for the period between when they first applied (and were denied) and when SSA finally recognized their marriage.

Who may be affected? This MAY apply to some individuals who did not actually submit applications for spousal or survivors benefits with SSA prior to the Windsor and Obergefell decisions (because they believed filing those applications would have been futile), if they can prove they contacted SSA about filing an application and SSA staff discouraged them from doing so (based on SSA’s discriminatory policies regarding their marriage). If so, they MAY be able to establish what’s called a “protective filing date” for their application and should consult the office where they filed the application to establish that date.4 Even those who can prove they applied for a reduced retirement benefit based on their own work record because SSA discouraged them from applying for spousal benefits, may be able to seek the higher spousal benefits.5

What happens next? SSA has identified approximately 800 individuals whose applications for benefits it denied because the agency did not recognize their marriages to a same-sex spouse. SSA says it will reach out to those individuals to let them know those denied applications will be reopened, but it is not clear when SSA will make that contact, and if they have current contact information for these individuals. Individuals do not need to wait for SSA to contact them to request that these applications be reopened. There may be others whose denials SSA has not identified in its systems. SSA will not contact them. They will need to contact SSA directly to request that their denied applications be reopened. SSA will go as far back in time as it must to pay all benefits that it denied by applying these nowinvalidated laws. When contacting SSA’s local offices or the 800 number, refer to the new section of the “POMS” referenced in the footnotes. When advocating before an Administrative Law Judge, Administrative Appeals Judge, or federal district court, it is best to refer to the new SSR 17-1p, also referenced in the footnotes.

A note on Supplemental Security Income (SSI) SSA had been asking SSI recipients married to someone of the same sex to pay back “overpayments” caused by SSA’s failure to recognize their marriages. Under an SSA policy released in 2016, SSA will issue a waiver, or forgiveness, of those overpayments even, in most cases, if individuals do not formally apply for relief.

4 While the advice provided by SSA at the time about the likely outcome of a claim based on a same-sex marriage was accurate, the rule explained in SSR 17-1p means that it now must be regarded as misinformation. There is a procedure (described in POMS GN 00204.008 ), which can be followed to establish that SSA provided misinformation regarding the need to file an application for benefits. Those whom SSA misinformed should go to the SSA office where SSA provided the misinformation, provide any evidence of the prior contact with the office (date, name of employee, nature of the conversation), and work with staff to resolve the matter. 5 To our knowledge, SSA has provided no formal guidance on these points; however, it reasonably follows that redress would be appropriate under the provisions of SSR 17-1p.

On March 1, 2017, the Social Security Administration (SSA) announced it would reopen any decision to deny spousal or survivors benefits to a...

On March 1, 2017, the Social Security Administration (SSA) announced it would reopen any decision to deny spousal or survivors benefits to a...