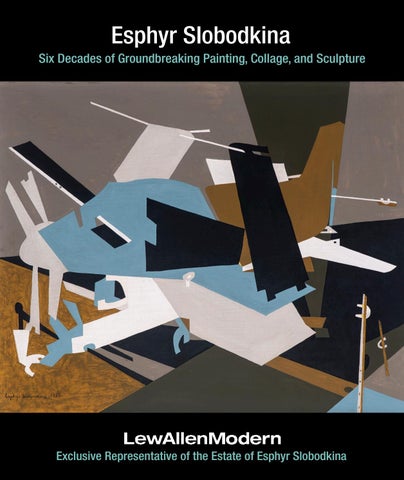 Exclusive Representative of the Estate of Esphyr Slobodkina

Esphyr Slobodkina: Painting, Collage, and Sculpture Celebrated as a fearless and dedicated artist over the course of her 70-year career, Esphyr Slobodkina was a pioneer of early American Abstraction, a then-controversial art movement that brought concepts of European Modernism into an American idiom during the 1930s and 1940s. Known in the art world for her firm sense of independence and innovative creativity in a wide range of materials, Slobodkina helped establish abstraction as an integral part of American art. A founder in 1936 and lifetime member of the legendary American Abstract Artists group in New York City, Slobodkina’s artistic evolution was influenced by her earlier life experiences in Russia, in Manchuria, and ultimately in the United States—where she would spend the majority of her lifetime. She was an exceptionally talented and determined artist who eschewed prevailing artistic fashions and conventions. By the time abstraction had become widely accepted in the 1950s and 1960s—thanks in part to her pioneering efforts—Slobodkina had compiled an impressive resume of exhibitions at important galleries and museums. That said, as one of the few women recognized within the modern art movement, Slobodkina’s career was still often overshadowed by men. Today, however, Slobodkina is acknowledged as a groundbreaking innovator of American abstract art – one who was resolutely committed to her own personal vision. Both scholars and critics have now recognized Slobodkina’s role as a significant pioneer in the development of American Abstract art and her important position in American art history is well established. Born in Chelyabinsk, Russia in 1908, Slobodkina studied both art and music from an early age. In 1918, she was exposed to the work of David Burliuk—often described as &quot;the father of Russian Futurism.” This was her first exposure to what she referred to as “totally abstract paintings—wild… in brilliant, spectral colors.” Burliuk’s Cubo-Futurist paintings provided a lifelong influence on Slobodkina. By 1921, as the political tensions of the Russian Revolution escalated, Slobodkina and her family escaped to Harbin, Manchuria. There she studied art and architecture—both of which would prove influential throughout her life. In 1928, Slobodkina moved to New York City and enrolled in classes at the prestigious National 2

Academy of Design. With its structured and rigid academic orientation, the program was artistically stifling to Slobodkina. Seeking renewed inspiration beyond her academic studies, she became drawn to the work of important European Modernists Alexander Archipenko and Constantin Brâncuși. At the National Academy, Slobodkina encountered another Russian student, Ilya Bolotowsky. Considered a promising student at the Academy, Bolotowsky was fascinated by the then upand-coming theories appearing in the art world. Bolotwosky would become Slobodkina’s very influential mentor and subsequently her husband. Though Slobodkina and Bolotowsky were together for essentially three years, their mutual immersion in the new premises of art would enable both of them to spring forward toward transformative new experiences in their careers. Through Bolotowsky, Slobodkina met Byron Browne, Gertrude and Balcomb Greene, Giorgio Cavallon, and others whose conversations roamed from the cost of canvas to the &quot;latest capers in Picasso&#39;s procession of quickly changing styles.&quot; This was a transformative time for Slobodkina, directing her toward her life’s missions. Slobodkina’s art in the early 1930s was marked by the influence of Post-Impressionism. In 1934, she received a fellowship to work at the renowned Yaddo artist colony in Saratoga Springs, New York. At Yaddo, Slobodkina demonstrated bold colors, forced perspective, and geometric reduction in her paintings. An example of this is her 1934 painting, Flowers in the Sink, which is reminiscent—in both forms and colorations—of the room interiors painted by Van Gogh. Slodbodkina would continue this theme in New York with her first Cubist-inspired painting, The Sink (1934-1935), now at the Heckscher Museum of Art in Huntington, NY; and in Pot Bellied Stove (1937), now at the Metropolitan Museum of Art in New York City. In these works, her subject is the concrete reality around her, reduced by Slobodkina to flat, geometric forms and toned shapes that suggested her own form of Cubism. Slobodkina immersed herself in the New York art world in the late 1930s. At that time, most American critics approached the new contemporary art derisively, attacking the work of many Europeans working in abstraction and cubism including the works of Picasso and Matisse. 3

They often resoundingly endorsed message-laden art, such as Regionalism or Social Realism; abstraction was viewed as an unacceptable aberration at best. When Esphyr Slobodkina cofounded the American Abstract Artists group, she and her fellow members were staunchly opposed to these rigid conventions. Slobodkina helped organize exhibitions of abstract art, beginning in 1937 with a groundbreaking exhibition at the legendary Squibb Galleries. The efforts of Esphyr Slobodkina, Alice Trumbull Mason, and other major proponents of the AAA ultimately paid off. Today, critics and art historians alike recognize American Abstract art for its “strong color, tight, controlled brushwork” and “very clean look,” as well as its “freshness, directness, and literal quality.” By 1936, Slobodkina had fully embraced abstraction as a means of artistic expression. She moved quickly through her Cubist experiments toward a concern with geometric planes and flattened pictorial space. Over time, her work slowly morphed into lyrical, curvilinear geometric forms that, on occasion, hint at real-life subjects. Importantly, works by Slobodkina—even at their most abstract—can readily be defined as “portraits” of the entities being depicted, as in Abstraction with Chair (ca. 1940) and Turboprop Skyshark (1950). To Slobodkina, abstraction was a means to examine and activate the spirit of an actual entity. Slobodkina’s definitive style—beginning in the late 1930s—demonstrated the architecturally inspired, hard-edged abstraction for which she became well known. Strikingly, in her characteristic way of alternative perceptions, Slobodkina incorporated textural, soft shapes that read almost like fabric cutouts—reflecting a lifelong interest in both fabric and the art of collage. The breakthrough to the three-dimensional materials provided great freedom of creativity for Slobodkina and helped to develop her abstract style further. Her collage-like abstract paintings consist of flat, layered forms—often overlaid in carefully constructed spatial configurations. Slobodkina continued to explore abstraction in painting, in particular employing industrial and mechanically inspired imagery with a powerful graphic, architectural sensibility, in works such as Deus ex Machina (1961), Amethyst Mines (1961-62), and Looking Backwards (1982). As art historian Ilmar Eric Orav stated, “Despite the fact that Slobodkina works with flatness, there is an implied depth without the use of perspective that makes her unique. She simply 4

does it with line. The areas of colors are flat, but her drawing and her color scheme give the illusion of inventive depth that can only exist in painting.” Never one to be contained by one medium or one methodology, Slobodkina—from the 1930s and throughout her career—created a series of surrealist-inspired sculptures made of wood, wire, and found mechanical objects. Reflecting her interest in architecture, modern technology, and the ephemera of daily life, Slobodkina would go on to create a number of sculptural constructions using found objects, including Small Familiar Personage (ca. 1950s) and Thrust Trophy No. 3 (1998). These sculptures were often consciously whimsical—conveying the joy the artist experienced in their creation. A simple, but excellent example of Slobodkina’s unusual (and largely unprecedented) ability to utilize “cross-over” media can be seen in the mixed media and collage work, Crossroads (1948). Slobodkina’s use of collage was a masterful way by which to transform reality and make dayto-day objects into art. The individual components that she chose (such as the blue telephone in Crossroads) take on an architectural and structural function—very different from how they were originally conceived. This work provides a sense of the artist’s methodical thought processes, linking her paintings with her more spontaneous and improvisational sculptures and constructions. In 1942, Slobodkina’s works were the subject of a one-person exhibition at America’s first modern art museum, A.E. Gallatin’s Museum of Living Art in New York. That same year, art critic Clement Greenberg wrote a pivotal review in The Nation magazine, in which he praised the works of Slobodkina shown in the Sixth Annual AAA exhibition and noting that the exhibit as a whole might indicate “the probable future of abstract art in this country.” Likewise, the following year, in 1943—at the enthusiastic recommendation of Alfred Barr, the first Director of the Museum of Modern Art—Peggy Guggenheim included Slobodkina’s work at her gallery, Art of This Century, in a show called, “Exhibition by 31 Women.” Among the jurors for this show were Marcel Duchamp and Max Ernst. In 1945, Slobodkina was one of three women included in the important exhibition at the Philadelphia Museum of Art, “Eight by Eight: Abstract Painting Since 1940.” Perhaps the halcyon of any American artist’s career at that time, Slobodkina was included in Ad Reinhardt’s 5

beloved (and impressively accurate) cartoon How to Look at Modern Art in America, published in 1946. Reinhardt’s cartoon is still considered today to be a scholarly benchmark in American Modern art. Slobodkina continued to fuse and layer graphic architectonic forms throughout the rest of her career. This quality comes to fore in such works as Turboprop Skyshark from 1950. Slobodkina depicted this turboprop aircraft with a cool, yet sophisticated detachment, breaking it apart into singular graphic images and creating a composition that conveys the turbulence and the strength of this unprecedentedly powerful military airplane. Although this is a flat painting (oil on gesso board), it feels three-dimensional, much like her earlier assemblages. Art critic Stuart Preston reviewed Slobodkina’s 1951 solo exhibition at the New School (which featured Turboprop Skyshark) and praised her “ingenious” sensibility, naming her “one of the more convincing and assured painters of today.” Turboprop Skyshark, as well as Levitator (1950), illustrate a recurring motif within her art: the suggestion of the various structures and armatures of the technology and culture of her time. Slobodkina reconfigures these intimations into the underlying framework of her art, further animating her paintings, sculptures, and collages as engaging dialogues between composition and architecture, stillness and motion. Between 1950 and 1994, Slobodkina’s works were exhibited in six of the Whitney Museum’s “Annual Exhibition of Contemporary American Painting,” as well as three other Whitney Museum exhibitions in 1963, 1992, and 1994. Over her lifetime and subsequently, Slobodkina’s works have been exhibited in other museums including the Metropolitan Museum, the Walker Art Museum, and at the Galeria Nazionale d’Arte Moderna in Rome. Currently, there is an exhibition being planned at the Centre Pompidou in Paris that will include Esphyr Slobodkina’s work. Esphyr Slobodkina viewed herself as an artist who was willing to take chances. While some have tried to categorize the artist and her work in any number of ways—the artist dismissed those descriptions with a brisk wave of her hand. In 2002, the New York Times art critic Grace Glueck wrote in a review that perhaps comes 6

closest to capturing Slobodkina’s artistic essence—an essence that continues to influence contemporary artists today: “[Slobodkina’s] paintings and collages of interlocking geometric forms are considered her signature works.” Praising the remarkable multi-faceted aspects of Slobodkina’s works, Glueck stated, “None of Ms. Slobodkina’s works suffer from her versatility. They are all of a creative piece, and a pleasure to behold.” Justin Ferate