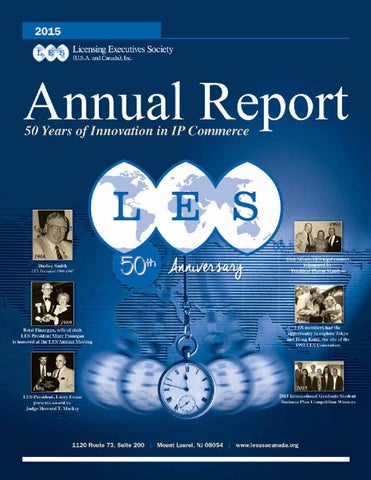 About LES For more than 50 years, LES has been the leading association for intellectual property, technology, and business development professionals to achieve professional and personal success. Whether you are new to licensing or an experienced licensing executive, LES is your professional home.

VISION LES is the global leader in standards development, education and certification in promoting IP commerce.

dedication and commitment to innovation

USA and Canada. We should all be proud of

in deal making and IP management/

what our association has accomplished since

commercialization. Whether you’re an

1965. LES is the leading innovation deal

industry veteran or someone new to the

profession, LES provides you with the

that has brought together a diverse group

of professionals across many industries and

advance your career — all while developing

long-lasting professional and personal With your support, the Board of Directors has

upon the foundation of our first 50 years to

LES will continue to be at the forefront of

ensure we remain a robust and vital society

thought leadership on the issues that are

most important to us in the development and commercialization of intellectual property.

Thank you for your continued confidence and

society. The priorities for year one were in

I know you’ll agree that LES is your

the area of Leadership and Governance. Our

accomplishments as part of this strategic

initiative include: the move from a stand-

alone office to an association management

Our association’s strength comes from its

members and industry partners. We count on

staff empowerment, and support; the decision

you for your continued active involvement. I

to move to a smaller, more strategic Board,

hope you continue to be as enthusiastic as I

am to take your association to the next level.

In closing out our 50 year and looking to th

our future, we honor our members for their www.lesusacanada.org | 3

For half a century, LES has grown and adapted to the changing industry

Special highlights of 2015 LES initiatives include:

landscape regarding deal –making and intellectual asset management while providing its members with the highest quality educational,

networking, and mentoring opportunities. The organization strives to

Leadership and governance were our highest priorities this year. The first

represent its members’ best interests and advocate on their behalf.

2015 was year one of our 5 year strategic plan “LES 2020”. Working within our strategic initiatives, the following objectives were put forth and formed the focus for LES in 2015:

1. Focus on governance and leadership – this was the highest priority for year one, and included ensuring a highly engaged and empowered staff as well as a move to a strategic board from an operational board to ensure LES’s long term future and nimble decision making.

focus was on leadership continuity and consistency across years. As a result, the President and President-Elect worked closely together all year so programs which began in 2015 continue in 2016 and beyond. The next focus of attention was bringing on board an engaged and empowered staff. Through an intense process, LES brought Association Headquarters on board to manage operations. Headquarters moved from Alexandria, Virginia to Mount Laurel, New Jersey. Since January 2015, significant time and effort was spent on bringing the new staff up the learning curve about LES and its programs. We are delighted with the results thus far and our office support should continue to improve with time. Next, we

focused on a new board structure which would make the board more focused on strategic plans, surrounded by a large Management Council focused on operations. This new organizational structure ensures nimble decision making with appropriate attention to strategy.

Annual Report 2015 one-day, deal-centric course has been designed by experienced LES executives for business and licensing professionals that are newer to the field in the USA and Canada. Whether it is a trademark, international brand, copyright, patent, know-how, trade secrets or a combination of some/all of these, recent transactions and auctions have confirmed the value of IP in business. This course is interactive and built around realworld examples and small group hands-on exercises. Other educational initiatives throughout the year included offering topical and meaningful content and programming and the expansion of the webinar program.

Revitalizing Partnerships Through expanded and enhanced strategic alliances with other professional societies and educational organizations, we are able to extend the LES brand and new-member outreach. Through these alliances, we are able to reach professionals who do not know about LESâ&amp;#x20AC;&amp;#x2122; offerings and benefits. As a result, LES has expanded its new member base and potential new sponsors.

LES has implemented new processes for recruiting members and

and at the Federal Circuit. Engaging legislators and educating members

retaining valued members. We are engaging both new and longstanding

has made a positive influence on the innovation economy, ensuring that

networking opportunities, ensuring all members feel like a part of the

LES has been focused on improving the fiscal management of resources

well as a new mentorship program. In addition, by early January 2016,

in 2015. Through working with our new Association Management

there will be a new membership system implemented which should

Company, LES has ensured proper and close management of finances

allow greater interaction between LES and members as well as providing

â&amp;#x20AC;&amp;#x201C;especially in reducing costs and providing greater value to members.

Operating costs have been significantly lowered through our agreement with AH and closing our office in Virginia. We now have very capable

financial management in place and have implemented more robust

controls through renegotiated contracts and services, and through proper

at all levels of experience. In 2015, LES revised the IP Business &amp;

management and forecasting, we have reduced the risk of incurring

Licensing Basics 100 into the IP Business Basics 101. This new,

Congratulations to all of the 2015 award recipients:

inventor, lecturer and creator of more than

Sony Corp, Blackberry, and Ericsson. The deal puts an end to litigation

started in 2013 by Rockstar against several companies whose phones operate on Google Inc’s Android operating system, which fiercely

The Frank Barnes Award was established

competes with Apple mobile products. As part of the deal, RPX licensed

in 2000 by a group of Licensing Executives

the patents to more than 30 companies, including Google and Cisco

to memorialize Frank Barnes’ vast contributions to the field of licensing through mentorship.

Kimberly-Clark entered into a technology transfer deal with

The Deals of Distinction Award (DDA) is an annual Industry Sector

worthy licensing deals and promote creative and innovative solutions to

Pfizer Inc. entered into an agreement with Merck KGaA, Darmstadt,

Germany to jointly develop and commercialize an investigational anti-

AeroClay, an innovative technology developed in the university’s

PD-L1 avelumab, initially discovered and developed by Merck KGa as

a potential treatment for multiple types of cancer.

solutions. AeroClay technology uses freeze-drying and polymer additives to turn clay into a versatile material that is sturdy, malleable,

The agreement was chosen because it was a complex and potentially

heat- and flame-resistant and eco-friendly. It can be used as an

transformational deal in the field of immuno-oncology, which is

absorbent, insulator, packing material, industrial catalyst, or even as an

be a big market and could drive incremental growth for companies involved.

Industry Sponsors The Licensing Executives Society greatly acknowledges the following companies who have helped make all of these achievements throughout 2015 possible by providing sponsorship support. Article One Partners

LES is run through the support of the many industry volunteers that commit time and resources to the programs and services offered. LES

greatly acknowledges the professionals who volunteer on the Board of Trustees, committees, chapters, and sectors.

Revenue over/ (under) Expenses

LES USA-Canada membership totals more than 6000 members, with more than 45 active chapters throughout the US and Canada The inaugural class of CLPs reaches 628 individuals from more than 15 countries 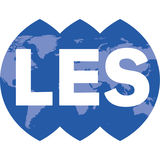