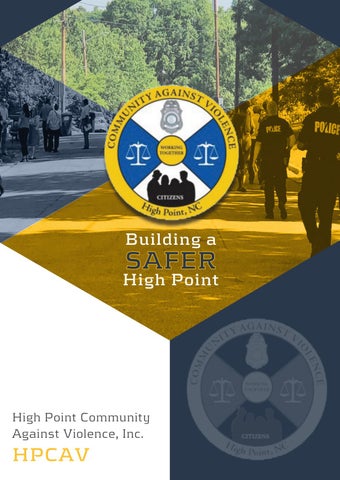 “WE KNOW THAT PARTNERSHIPS WORK AND MAKE A COMMUNITY STRONGER, AND WE WANT OTHERS TO BE PART OF THIS FAMILY. “

retta Bush, president of High Point Community Against Violence, has been involved in efforts to reduce violence in High Point since the mid-1990s – before there was any organization. “I stayed because I saw real opportunity, and several people who were active in those first meetings have stayed this long because they, too, believe in it.” “We know that partnerships work and make a community stronger, and we want others to be part of this family. We welcome people to come to our monthly meetings and participate in call-ins and responses.” She says her dedication “always has been based on results; seeing people turn their lives around. Whether a person went to prison or we see them around town, there has been no resentment either way. “The changes in their lives is what has mattered most.” 4

he High Point Police Department and its state and federal law enforcement partners had been searching for a new and effective way to reduce violence. The U.S. Attorney’s office found it in the Boston Gun Project/Project CeaseFire, a youth homicide reduction initiative in Boston, Massachusetts, in which law enforcement and community worked together to dramatically decrease gun violence. Several community groups, each working independently to reduce violence, were invited to learn about this strategy. Many meetings and much discussion later, committed members from each group joined together and began working with the High Point Police Department, eventually forming High Point Community Against Violence, Inc. “When I talked to knowledgeable people in High Point and the U.S. Attorney’s office…we found…very small numbers of very high-risk people, very well known to law enforcement. That was what we’d found in Boston and elsewhere, so that was very encouraging.”

“(The High Point Police Chief) reached out to me, to tell me of something they were working on. I didn’t even know (they) knew who I was, but I discovered … we had a lot in common. My problem was also their problem. We were struggling to win the same fight for the souring ground beneath us.”

Rob Lang, Assistant U.S. attorney for North Carolina’s Middle District, was aware of significant violent crime increases in the Triad in the early-to-mid-1990s.

“AS LONG AS THERE IS A HEALTHY, HONEST PARTNERSHIP BETWEEN THE COMMUNITY AND POLICE, WE ARE GOING TO SUCCEED.”

Some residents became outraged at the death in 1997 of 17-year-old Jacob Walker, an unintended homicide victim and demanded that then Chief of Police Louis Quijas do something about it. Quijas explained that he, too, was outraged but wondered why there was no community outrage about the previous 14 homicides in the city in the fall of that year. He explained that violence is not just a police problem, but a community problem as well, and he needed the community’s help. “High Point had a Uniform Crime Report index over 1,000 violent crimes per 100,000 people. We saw a rift between community and law enforcement and thought, if we worked together, we might be able to save some lives.”

Over a year’s time, the Violence Task Force at High Point Regional Hospital, the Police Department’s Black on Black Violence group and others merged and High Point Community Against Violence was established in 1998. “The community was engaged in the deterrence policing partnership,” Lang says, “and what it wanted to do was help folks return to their families and communities and be positive.” “As long as there is a healthy, honest partnership between the community and police, we are going to succeed.”

he theory behind Project CeaseFire, referred to as problem-oriented policing or focused deterrence, was the basis for the strategy High Point developed to reduce violent crime. Focused deterrence does just what the name implies: It focuses deterrence efforts on the small number of individuals who are driving the majority of the crime and violence.

Face to face meeting and offer of assistance to every juvenile (and a family member or guardian) returning to High Point from Youth Correction Centers.

HPCAV serves as the moral voice of our community. At every Notification meeting, volunteers stand together to speak the truth to individuals identified as the source of current violence. A message is delivered that offers direction, encouragement, assistance and hope, as well as a promise that if the individuals do not stop committing violent acts, the community will stand with the Police Department because we will not tolerate violence.

Since 1998, more than 2,000 people have been through some version of a Notification meeting. Of that group, four out of five HAVE NOT reoffended.

“THE PARTNERSHIP BETWEEN LAW ENFORCEMENT AGENCIES AND COMMUNITY PARTNERS IS AND HAS BEEN A FOUNDATIONAL COMPONENT OF FOCUSED DETERRENCE STRATEGIES FROM THE VERY BEGINNING.”

he “community” is a critical part of the strategy. Whenever there is a violent act, HPCAV volunteers and law enforcement personnel go into the neighborhoods where the violence occurred. They walk doorto-door, asking if residents are OK, giving them the most up-to-date facts, correcting misunderstandings and taking any information residents may have to give.

“VIOLENCE IS NOT A POLICE PROBLEM; IT’S A COMMUNITY PROBLEM. WE HAVE TO BE THE ONES TO TELL THE POLICE DEPARTMENT WHAT’S EXISTING IN OUR NEIGHBORHOODS.” – Bobby Davis, Community Volunteer, retired officer, High Point Police Department

“HIGH POINT HAS DONE MORE WITH THESE NEW IDEAS THAN ANY OTHER SINGLE PLACE IN THE COUNTRY.”

“It has dramatically reduced violence, institutionalized support for those at highest risk, and created new approaches to drug markets and domestic violence that are having national impact.It’s extraordinary, and everybody should be honored for what they’ve done.” – David Kennedy

Validated data – actual numbers of crimes committed by specific individuals – and trends based on that data have directed all strategic planning and activities from Day One. That data is shared freely, building transparency into all decision- making. It is the use of data that has enabled us to get more community partners to the table and to have honest discussions with individuals committing violent crimes and their families. Research partners, such as the University of North Carolina at Greensboro, have been a key component of HPCAV’s work.

High Point was the first small city in the United States to implement focused deterrence strategies. Since 1999, at least 49 U.S. cities and counties and three foreign countries have been introduced to or trained in implementation of what often is called the High Point Model of focused deterrence, including community involvement. The High Point Police Department and HPCAV have won eight state and national awards and numerous other recognitions for their work to reduce violence in our city.

HPCAV always will be in the business of rebuilding. Continued use of focused deterrence, with flexibility, enables law enforcement and HPCAV to prevent and respond to on-going and new challenges. Since High Point began using focused deterrence in 1998, the violent crime rate (as of 2020) has decreased by 62%, while the city’s population has grown by 51%. The reduction and prevention of an estimated 3,400 violent crimes has saved High Point over $8 million. *

“My life was spiraling out of control and, although I had been wrapped up in the street life as far as hustling drugs and gang affiliation … I needed change. HPCAV helped pave the way … It’s because of you all that I am a better version of myself.”

“HPCAV …means if you want some help and you try to find it, it’s out there for you. When you do find help, you need to take advantage of it and use it wisely. It has kept me from thinking about doing wrong… kept me focused.”

Reducing violence benefits the entire city. But the most important work HPCAV does is in the lives of individuals committing those violent acts. “I noticed a strong potential in your ability to help the troubled members of our community and train them to become productive citizens of society.” Zaki Khalifa Businessman, Community Leader

Committed, Organized The deep desire of a few small groups of people from different walks of life across the city, who were willing to work through whatever stood in the way of the good of the whole and who were committed to the long haul, gave rise to the organization that is High Point Community Against Violence, Inc.

“I have appreciated the steadfast approach the members always have taken while consistently maintaining a clear understanding and focus on their objective, which is to help make High Point safer. I am confident that our work in partnership with HPCAV has saved many lives and has gone far towards making High Point much safer for all.” – Kenneth J. Shultz, Chief, High Point Police Department, 2016-2020

The purpose today is as it has always been: To make High Point a safer place for everyone. “There were lots of strategies out there, but we wanted to create something unique, something sustainable, in High Point. What impressed me most was the willingness of the community to buy into the strategy, to be a part of the strategy, and to own it.” – Louis Quijas, Chief, High Point Police Department, 1997-2003

Motivated by concern for people in the English Road Baptist Church neighborhood, Pastor Jim Summey has been combatting violence in High Point for a quarter century.

Back in the early 1990s, he and his church’s members, “stepped out – to ridicule, threats, laughter and scoffing – but we never stopped.” The effort did not thwart the prostitutes, drug dealers or violence, however, so, with pastors of two other churches (Rankin Memorial Methodist and First Reformed UCC), West End Ministries was established. One dealt primarily with youth, another took on housing concerns and the third focused on crime and safety. “It was out of this that the relationship with the High Point Police Department blossomed,” Summey says. “High Point Community Against Violence had been established and I came to my first meeting in March 2003.” He later became HPCAV’s executive director.

His message is simple and direct: “We are High Point Community Against Violence – ONLY! We specialize in understanding violence, those who do it, how to learn, how to help, admitting our failures and continuing our success. We value relationships and stand on truth, not myth and emotions.”

HP has its 17th homicide.

In” or “Notification” is held.

School of Government to

drop to zero (0) until July

begin working together and

with HPPD to reduce violent crime.

Notifications begin, in person at

Hero of the Month Award by US

2017 2017-2019 Heroin use and overdoses rise significantly as does related violence.

5 Call-ins have been held;

Assaults with guns down

begin coming to HP to observe and learn.

donates the building at

Family Service of the

and life skills to our

made in person, at

to our nation and

2019 Therapeutic program for small group of clients, their children and other family members begins. 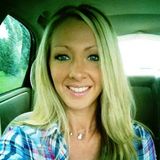 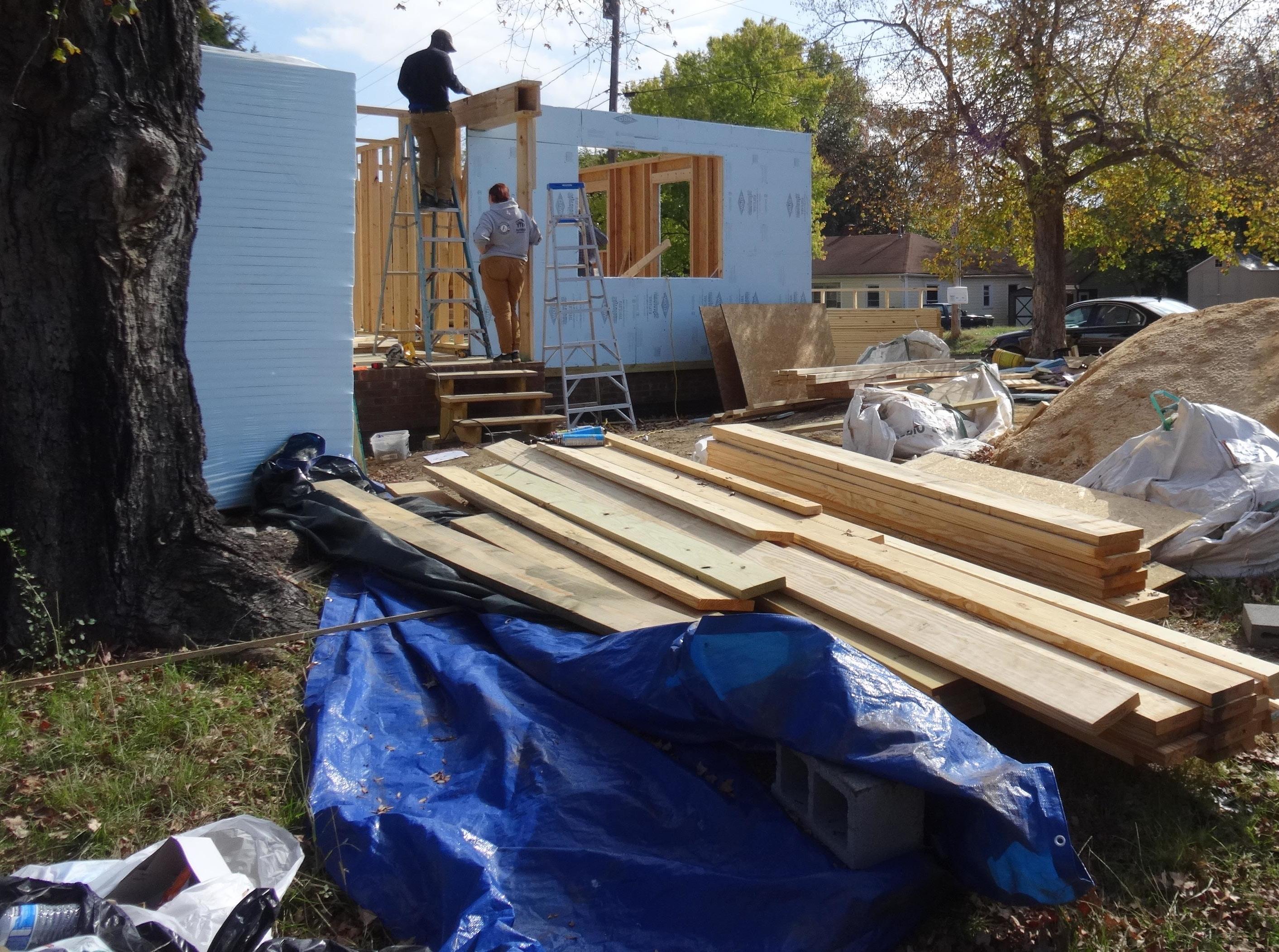 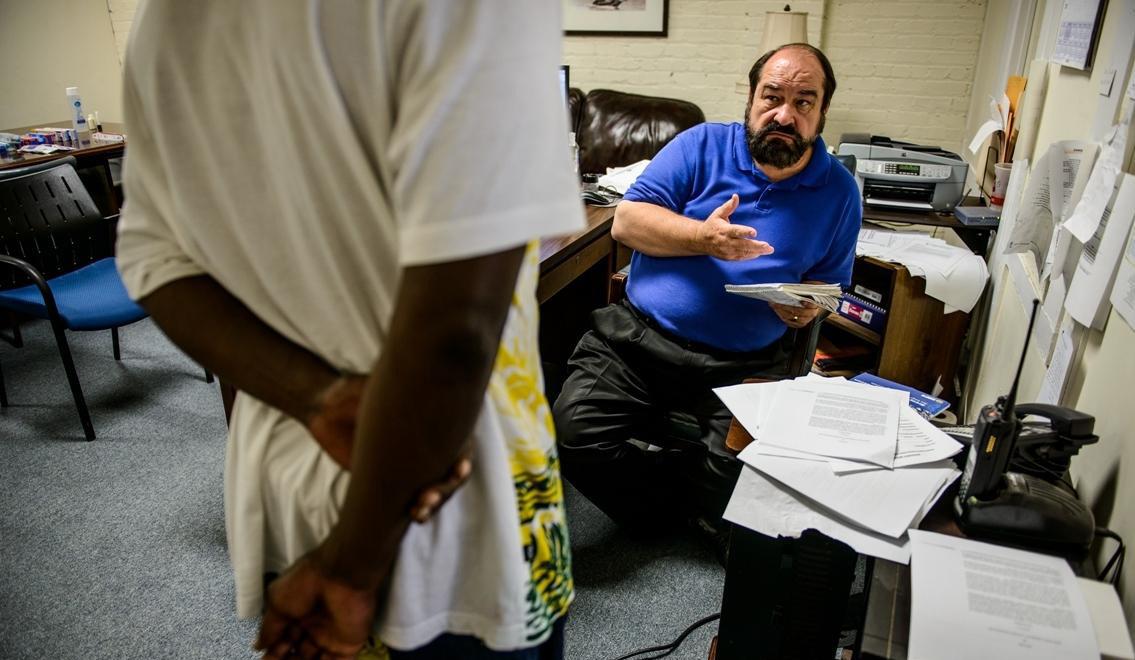 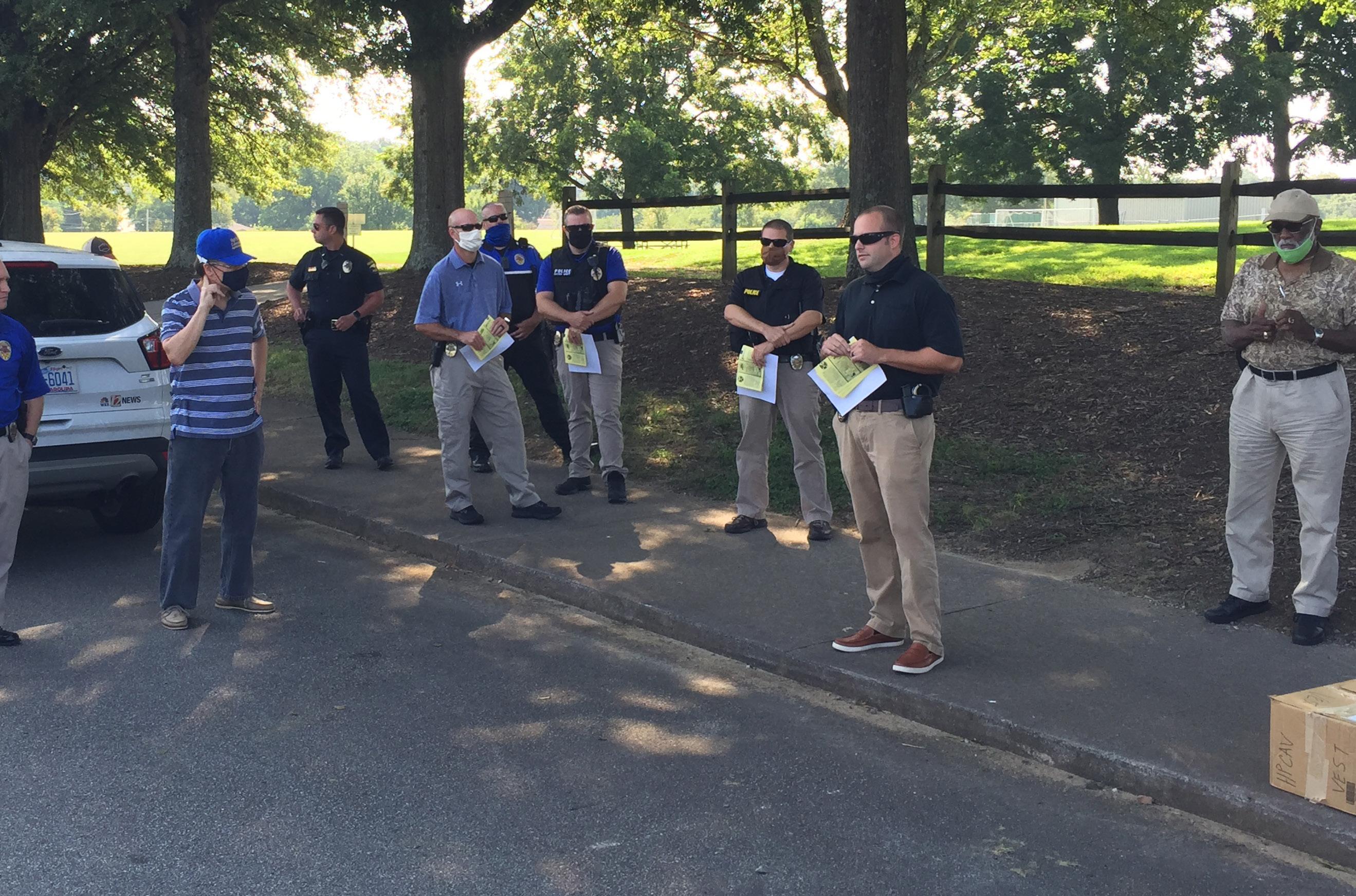 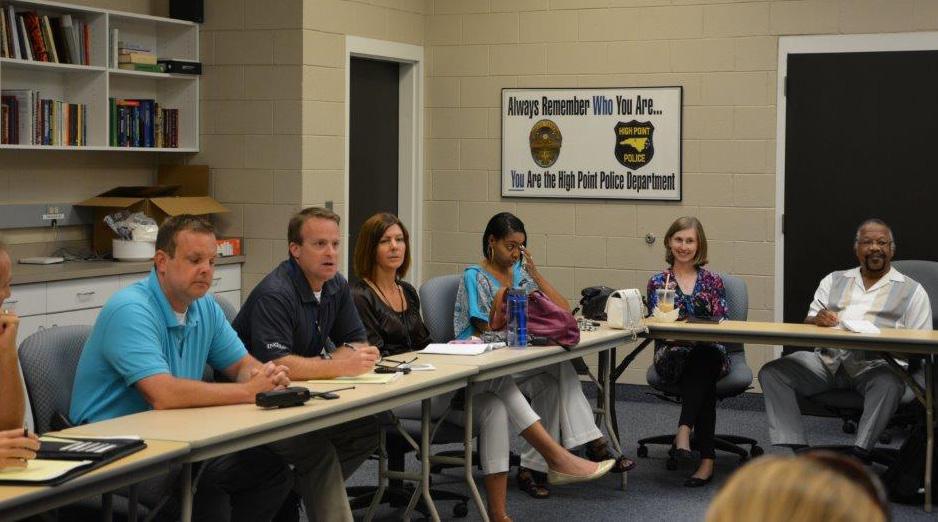