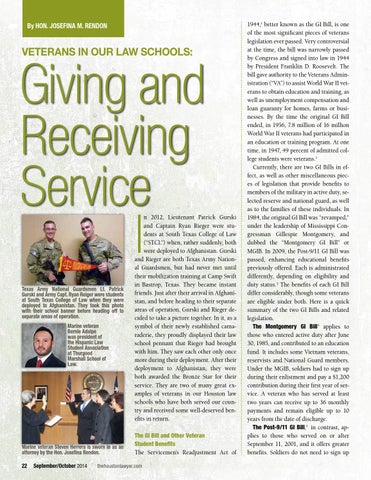 Veterans in Our Law Schools:

Giving and Receiving Service I Texas Army National Guardsmen Lt. Patrick Gurski and Army Capt. Ryan Reiger were students at South Texas College of Law when they were deployed to Afghanistan. They took this photo with their school banner before heading off to separate areas of operation. Marine veteran Bernie Adalpe was president of the Hispanic Law Student Association at Thurgood Marshall School of Law.

Marine veteran Steven Herrera is sworn in as an attorney by the Hon. Josefina Rendon. 22

n 2012, Lieutenant Patrick Gurski and Captain Ryan Rieger were students at South Texas College of Law (“STCL”) when, rather suddenly, both were deployed to Afghanistan. Gurski and Rieger are both Texas Army National Guardsmen, but had never met until their mobilization training at Camp Swift in Bastrop, Texas. They became instant friends. Just after their arrival in Afghanistan, and before heading to their separate areas of operation, Gurski and Rieger decided to take a picture together. In it, as a symbol of their newly established camaraderie, they proudly displayed their law school pennant that Rieger had brought with him. They saw each other only once more during their deployment. After their deployment to Afghanistan, they were both awarded the Bronze Star for their service. They are two of many great examples of veterans in our Houston law schools who have both served our country and received some well-deserved benefits in return. The GI Bill and Other Veteran Student Benefits The Servicemen’s Readjustment Act of

1944,1 better known as the GI Bill, is one of the most significant pieces of veterans legislation ever passed. Very controversial at the time, the bill was narrowly passed by Congress and signed into law in 1944 by President Franklin D. Roosevelt. The bill gave authority to the Veterans Administration (“VA”) to assist World War II veterans to obtain education and training, as well as unemployment compensation and loan guaranty for homes, farms or businesses. By the time the original GI Bill ended, in 1956, 7.8 million of 16 million World War II veterans had participated in an education or training program. At one time, in 1947, 49 percent of admitted college students were veterans.2 Currently, there are two GI Bills in effect, as well as other miscellaneous pieces of legislation that provide benefits to members of the military in active duty, selected reserve and national guard, as well as to the families of these individuals. In 1984, the original GI Bill was “revamped,” under the leadership of Mississippi Congressman Gillespie Montgomery, and dubbed the “Montgomery GI Bill” or MGIB. In 2009, the Post-9/11 GI Bill was passed, enhancing educational benefits previously offered. Each is administrated differently, depending on eligibility and duty status.3 The benefits of each GI Bill differ considerably, though some veterans are eligible under both. Here is a quick summary of the two GI Bills and related legislation. The Montgomery GI Bill4 applies to those who entered active duty after June 30, 1985, and contributed to an education fund. It includes some Vietnam veterans, reservists and National Guard members. Under the MGIB, soldiers had to sign up during their enlistment and pay a $1,200 contribution during their first year of service. A veteran who has served at least two years can receive up to 36 monthly payments and remain eligible up to 10 years from the date of discharge. The Post-9/11 GI Bill,5 in contrast, applies to those who served on or after September 11, 2001, and it offers greater benefits. Soldiers do not need to sign up