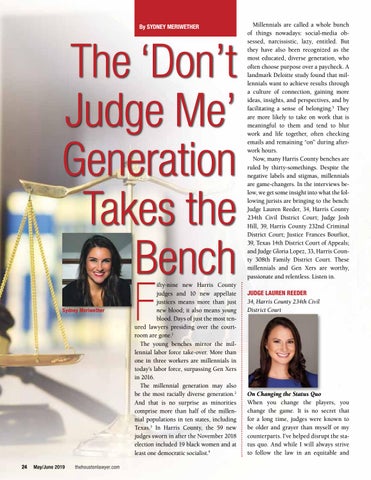 By Randall O. Sorrels and By SydneyA.Meriwether Michelle Ciolek

The ‘Don’t Judge Me’ Generation Takes the Bench Sydney Meriwether

ifty-nine new Harris County judges and 10 new appellate justices means more than just new blood; it also means young blood. Days of just the most tenured lawyers presiding over the courtroom are gone.1 The young benches mirror the millennial labor force take-over. More than one in three workers are millennials in today’s labor force, surpassing Gen Xers in 2016. The millennial generation may also be the most racially diverse generation.2 And that is no surprise as minorities comprise more than half of the millennial populations in ten states, including Texas.3 In Harris County, the 59 new judges sworn in after the November 2018 election included 19 black women and at least one democratic socialist.4

Millennials are called a whole bunch of things nowadays: social-media obsessed, narcissistic, lazy, entitled. But they have also been recognized as the most educated, diverse generation, who often choose purpose over a paycheck. A landmark Deloitte study found that millennials want to achieve results through a culture of connection, gaining more ideas, insights, and perspectives, and by facilitating a sense of belonging.5 They are more likely to take on work that is meaningful to them and tend to blur work and life together, often checking emails and remaining “on” during afterwork hours. Now, many Harris County benches are ruled by thirty-somethings. Despite the negative labels and stigmas, millennials are game-changers. In the interviews below, we get some insight into what the following jurists are bringing to the bench: Judge Lauren Reeder, 34, Harris County 234th Civil District Court; Judge Josh Hill, 39, Harris County 232nd Criminal District Court; Justice Frances Bourliot, 39, Texas 14th District Court of Appeals; and Judge Gloria Lopez, 33, Harris County 308th Family District Court. These millennials and Gen Xers are worthy, passionate and relentless. Listen in. Judge Lauren Reeder 34, Harris County 234th Civil District Court

On Changing the Status Quo When you change the players, you change the game. It is no secret that for a long time, judges were known to be older and grayer than myself or my counterparts. I’ve helped disrupt the status quo. And while I will always strive to follow the law in an equitable and