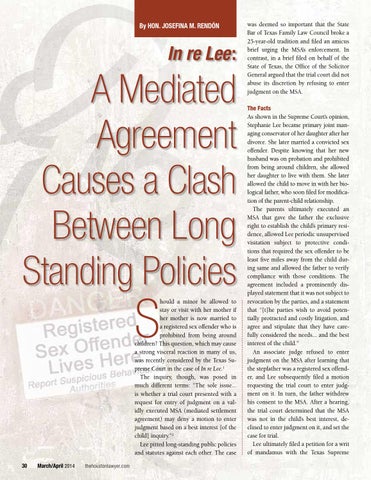 A Mediated Agreement Causes a Clash Between Long Standing Policies

hould a minor be allowed to stay or visit with her mother if her mother is now married to a registered sex offender who is prohibited from being around children? This question, which may cause a strong visceral reaction in many of us, was recently considered by the Texas Supreme Court in the case of In re Lee.1 The inquiry, though, was posed in much different terms: “The sole issue... is whether a trial court presented with a request for entry of judgment on a validly executed MSA (mediated settlement agreement) may deny a motion to enter judgment based on a best interest [of the child] inquiry.”2 Lee pitted long-standing public policies and statutes against each other. The case

was deemed so important that the State Bar of Texas Family Law Council broke a 25-year-old tradition and filed an amicus brief urging the MSA’s enforcement. In contrast, in a brief filed on behalf of the State of Texas, the Office of the Solicitor General argued that the trial court did not abuse its discretion by refusing to enter judgment on the MSA. The Facts As shown in the Supreme Court’s opinion, Stephanie Lee became primary joint managing conservator of her daughter after her divorce. She later married a convicted sex offender. Despite knowing that her new husband was on probation and prohibited from being around children, she allowed her daughter to live with them. She later allowed the child to move in with her biological father, who soon filed for modification of the parent-child relationship. The parents ultimately executed an MSA that gave the father the exclusive right to establish the child’s primary residence, allowed Lee periodic unsupervised visitation subject to protective conditions that required the sex offender to be least five miles away from the child during same and allowed the father to verify compliance with those conditions. The agreement included a prominently displayed statement that it was not subject to revocation by the parties, and a statement that “[t]he parties wish to avoid potentially protracted and costly litigation, and agree and stipulate that they have carefully considered the needs... and the best interest of the child.” An associate judge refused to enter judgment on the MSA after learning that the stepfather was a registered sex offender, and Lee subsequently filed a motion requesting the trial court to enter judgment on it. In turn, the father withdrew his consent to the MSA. After a hearing, the trial court determined that the MSA was not in the child’s best interest, declined to enter judgment on it, and set the case for trial. Lee ultimately filed a petition for a writ of mandamus with the Texas Supreme