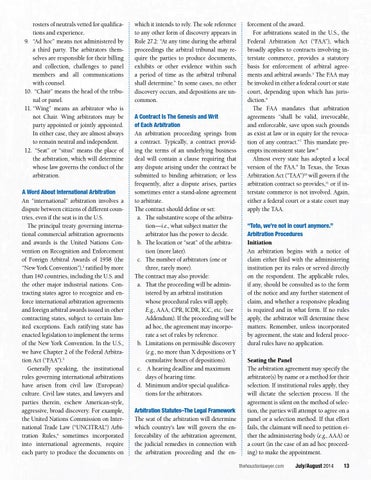 rosters of neutrals vetted for qualifications and experience. 9. “Ad hoc” means not administered by a third party. The arbitrators themselves are responsible for their billing and collection, challenges to panel members and all communications with counsel. 10. “Chair” means the head of the tribunal or panel. 11. “Wing” means an arbitrator who is not Chair. Wing arbitrators may be party appointed or jointly appointed. In either case, they are almost always to remain neutral and independent. 12. “Seat” or “situs” means the place of the arbitration, which will determine whose law governs the conduct of the arbitration. A Word About International Arbitration An “international” arbitration involves a dispute between citizens of different countries, even if the seat is in the U.S. The principal treaty governing international commercial arbitration agreements and awards is the United Nations Convention on Recognition and Enforcement of Foreign Arbitral Awards of 1958 (the “New York Convention”),2 ratified by more than 140 countries, including the U.S. and the other major industrial nations. Contracting states agree to recognize and enforce international arbitration agreements and foreign arbitral awards issued in other contracting states, subject to certain limited exceptions. Each ratifying state has enacted legislation to implement the terms of the New York Convention. In the U.S., we have Chapter 2 of the Federal Arbitration Act (“FAA”).3 Generally speaking, the institutional rules governing international arbitrations have arisen from civil law (European) culture. Civil law states, and lawyers and parties therein, eschew American-style, aggressive, broad discovery. For example, the United Nations Commission on International Trade Law (“UNCITRAL”) Arbitration Rules,4 sometimes incorporated into international agreements, require each party to produce the documents on

which it intends to rely. The sole reference to any other form of discovery appears in Rule 27.2: “At any time during the arbitral proceedings the arbitral tribunal may require the parties to produce documents, exhibits or other evidence within such a period of time as the arbitral tribunal shall determine.” In some cases, no other discovery occurs, and depositions are uncommon. A Contract Is The Genesis and Writ of Each Arbitration An arbitration proceeding springs from a contract. Typically, a contract providing the terms of an underlying business deal will contain a clause requiring that any dispute arising under the contract be submitted to binding arbitration; or less frequently, after a dispute arises, parties sometimes enter a stand-alone agreement to arbitrate. The contract should define or set: a. The substantive scope of the arbitration—i.e., what subject matter the arbitrator has the power to decide. b. The location or “seat” of the arbitration (more later). c. The number of arbitrators (one or three, rarely more). The contract may also provide: a. That the proceeding will be administered by an arbitral institution whose procedural rules will apply. E.g., AAA, CPR, ICDR, ICC, etc. (see Addendum). If the proceeding will be ad hoc, the agreement may incorporate a set of rules by reference. b. Limitations on permissible discovery (e.g., no more than X depositions or Y cumulative hours of depositions). c. A hearing deadline and maximum days of hearing time. d. Minimum and/or special qualifications for the arbitrators. Arbitration Statutes–The Legal Framework The seat of the arbitration will determine which country’s law will govern the enforceability of the arbitration agreement, the judicial remedies in connection with the arbitration proceeding and the en-

forcement of the award. For arbitrations seated in the U.S., the Federal Arbitration Act (“FAA”), which broadly applies to contracts involving interstate commerce, provides a statutory basis for enforcement of arbitral agreements and arbitral awards.5 The FAA may be invoked in either a federal court or state court, depending upon which has jurisdiction.6 The FAA mandates that arbitration agreements “shall be valid, irrevocable, and enforceable, save upon such grounds as exist at law or in equity for the revocation of any contract.”7 This mandate preempts inconsistent state law.8 Almost every state has adopted a local version of the FAA.9 In Texas, the Texas Arbitration Act (“TAA”)10 will govern if the arbitration contract so provides,11 or if interstate commerce is not involved. Again, either a federal court or a state court may apply the TAA. “Toto, we’re not in court anymore.” Arbitration Procedures Initiation An arbitration begins with a notice of claim either filed with the administering institution per its rules or served directly on the respondent. The applicable rules, if any, should be consulted as to the form of the notice and any further statement of claim, and whether a responsive pleading is required and in what form. If no rules apply, the arbitrator will determine these matters. Remember, unless incorporated by agreement, the state and federal procedural rules have no application. Seating the Panel The arbitration agreement may specify the arbitrator(s) by name or a method for their selection. If institutional rules apply, they will dictate the selection process. If the agreement is silent on the method of selection, the parties will attempt to agree on a panel or a selection method. If that effort fails, the claimant will need to petition either the administering body (e.g., AAA) or a court (in the case of an ad hoc proceeding) to make the appointment. thehoustonlawyer.com