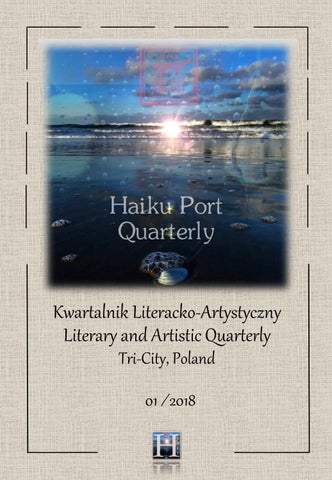 Azi Kuder: All the begininng, I would like to thank you for finding the time for the interveiw. Could you say something about yourself and your artistic career? Kuniharu Shimizu: I was born into a priest’s family in Nara, Japan. I have ten siblings, and I am the second child. Since my childhood days, I have enjoyed art. My formal art training came when I attended the University of Hawai’i. I majored in painting and graduated with a Bachelor’s Degree in Fine Arts(BFA). My last painting at the University of Hawai’i was purchased by The Honolulu Museum of Art. I returned to Japan after graduation, and worked as a graphic designer and illustrator. I have received numerous award in these fields. In the year 2000, I began to get involved with haiku and haiga. AK: Polish readers of haiku know you well as an advisor and judge of World Haiku Association, can you share your experience connected with WHA with us?

Interview with Kuniharu Shimizu 2/4 KS: Jim Kacian, an American haijin, visited me in my hometown, of Nara, after attending the first WHA conference in Slovenia in 2000. Through Jim, I came to know Ban’ya Natsuishi and Dimitar Anakiev, who along with Jim were the cofounders of WHA. Ban’ya later asked me to hold the second WHA conference in my hometown, Tenri, Nara, Japan, and I organized the conference, which was attended by more than 200 people, including 20 foreign participants. I think it was because of this contribution that I was designated as one of the advisors to WHA. WHA also launched its website around that time, and they wanted to include a haiga contest. I was asked by Ban’ya be to one of the three judges of the haiga contest. As the years have gone by, I became the lone judge of the haiga contests. I volunteer as a judge in the hopes of promoting haiga to the world, which is a relatively unknown genre. AK: Your haiga are well known to all the lovers of the genre, where do you get your inspiration from? KS: I get my inspiration from many sources. I read someone’s haiku, and if I get inspired by it, I create the artwork to accompany it. I call this a collaborative haiga. I have made more than 2,500 collaborative haiga. I have collaborated with more than 250 haijin throughout the world, and this includes the past Japanese masters: Basho, Buson, Issa, and Shiki. In recent years, I write more of my own haiku and add illustrations to them. In other cases, I write the haiku first, and that inspires me to do the artwork. Sometimes, I take photograhs and they inspire me to write haiku. I live in an area called Nara, which was considered the political and cultural center of old Japan. There are a lot of old things and sceneries that have escaped the modernization of the present times. As I take my walks, I find curious things and scenery that inspire me to write haiku and to photograph. My formative years, from age 15 through 21, were spent in Hawai’i. The many memories of my years spent there inspire me to write haiku and make artworks. I have a friend in Hawai’i who sends me fresh photographic scenes of Hawai’i, and these inspire me, as well.

Interview with Kuniharu Shimizu 3/4 AK: What is haiku for you? KS: Haiku is a wondrous joy in my life. I find that unpleasant things become bearable when I compose a haiku. Each time I write haiku and make haiga, I experience that special joy of creation. Each completed project is small, but small things can become huge joys. This trully accentuates and enhances my life. I am 68 years old now, and I consider myself a happy man, enjoying this wonderful experience. AK: How would your explain the phenomenon haiku in western world ? KS: People have a mind, and when there is a mind, there is poetry. Haiku is a form of poetry, so everybody on earth can write haiku if they want to. Even the Africans are eagerly writing haiku and enjoying it. Through my many haiga colloborations, I have reconfirmed the fact, that people are alike at the core of the mind, no matter where they live, what culture they grow up in, or what language they speak. Poetry springs from the core of the mind, and so does haiku. We all feel something toward the clouds, sunshine, rain, and the wind. We all look with interest at flowers, trees, dogs, cats, birds, and insects. We love, get frustrated, get spirited, and have sadness. That we can appreciate haiku written by someone we donâ&#x20AC;&#x2122;t know, have never have met, is the clear proof of how much alike we all are.

AK: How do culture diffrences influence of perception haiku . Do you think that the Europeans are able to understand it at all? KS: For the reasons I mentioned in the previous question, I say undoubtedly, YES! The Europeans understand haiku well. In my experience in the haiga collaborations I have done, I did not feel any cultural differences. If there existed any such differences, I think, they would add a special spice to a haiku, resulting in a good diversity in haiku. AK: What is the recipe to a successful haiku?

Interview with Kuniharu Shimizu 4/4 KS: Let us take a walking scene as an example. When you take a walk, do not just walk, but go into a haiku mode. Keep your eyes focused, and search for something that interests you. Sometimes a haiku will come immediately at the scene, but if it does not, and you are still intrigued by the scene, take photos, and look at them later on, and a haiku will eventually emerge. Perhaps, a few words will appear at first. Write them down, and then shift them around. As you do this, you can focus on what you really want to say. You can find the cutting words, too. Then you eliminate the unnessary words, and pick the right words and then arrange them together in haiku form. AK: Is poetic inspiration necessary to create haiku, in your opinion? KS: Oh, most definitely yes. Like I mentioned before, haiku is a form of poetry. With the same poetic inspiration, you can write either a poem or a haiku. AK: What could you advise our Polish authors of haiku? KS: As a judge of the WHA haiga contest, I get to see many haiga submitted from Poland. In fact there are far more submissions from Poland than from any other country. Many haiga use photographic images for haiga, and the ones submitted from Poland are no exception. In general, the quality of the photography is very high in the Polish submissions. My experience as a graphic designer, tells me that Poland is noted for their international poster contests. I am not sure if these contests still exist, but I have seen many good posters from Poland. The posters, which consists of a visual image and simple text, somewhat resembles a haiga. Polish people may very well have a good background in creating haiga.

I would like to see more good photo haiku from Poland. And if possible, I want to see non-photo haiku too such as paintings, drawings, collages, any type of artwork + haiku, in the future. AK: Dear Kuniharu - san, thank you very much for honoring the magazine with the interviev. You are very welcome to cooperate with us in the future.

The Road to Haiku, part 1. 1/7 by Dorota Pyra and Lech Szeglowski In this paper, the authors relate how they first became interested in haiku and, while providing examples of their work in both Polish and English, they describe the long road they have followed since then in honing their skills and expanding their activities in the haiku world. They also discuss how their activities have led to a connection with Matsuyama and the Shiki Team, a connection that continues to this day. They also express their gratitude to Prof. Manabu Sumioka for all his efforts in promoting haiku and in creating a virtual space in which lovers of haiku from around the world can meet, learn, and share their creations.

The Road to Haiku, part 1. 3/7 Droga do haiku, cz. 1. tekst: Dorota Pyra after long illness－ in the garden again the first steps of my father

Dorota Pyra lives in Gdansk, where she works as a pre-school teacher. She commenced her haiku hike in 2005. Beside this genre, she writes longer poetry and also children's short stories and songs. Dorota's haiku can be found on Polish and foreign websites as well as in paper publication. "Icy moon", her first book of haiku and free poems, was published by Bernardinum Press of Pelplin in 2009. By winning The 2009 Shiki Special Kukai in memory of William J. Higginson and getting the prize - the journey to Matsuyama - she was given the chance to feel the air that created this miniature poetry. Dorota's fascination with photography and visual art as well as the kind of education she got (Academy Of Fine Arts in Gdansk) allow her to draw joy from joining word to image in the form of photo-haiga. Her works can be seen on WHA Haiga Web site, Haigaonline, DailyHaiga, Sketchbook and on her blog http://rozsypany-czas.blogspot.com.

Azi Kuder - a resident of Gdynia, a humanist by profession, practicing various fields of art: poetry, prose and painting. A graduate of Polish Philology at the University of Gdańsk. Author of the novels: Dwudyszna and Eyes of Reindeer. For many years she has been passionate about haiku poetry and haiga. Winner of Polish and foreign competitions. She has published, among others, in Asahi Haikuist Netwok, Cattails, Daily Haiga, Wild Plum, World Haiku Association, Iris Haiku Magazine, Almanach - Migratory Birds. She runs haiku workshops for beginners. A member of Polish Haiku Association.

Lena Pelowska lives in Gdańsk. She is a physicist, working in science and industrial acoustics. Physics, psychology and photography are her passions, but her favourite hobby for ten years is writing haiku. “A day without a haiku is a day wasted”. Her haiku have been published in a few paper anthologies and were hono-rably mentioned in national and international haiku competitions. She conducts haiku workshops for beginners. In recent years Lena has been fascinated by B&W Photography, which spiritually corresponds with haiga and haiku style.

Tomasz Dunajski lives in Gdańsk. He is a photographer amateur, making landsacpe photos for a few years. He won a few internet competitions for B&W Photography, what is his speciality. 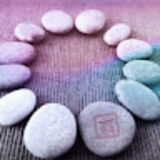