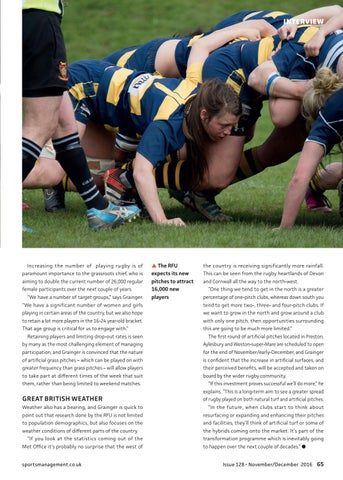 Increasing the number of playing rugby is of paramount importance to the grassroots chief, who is aiming to double the current number of 26,000 regular female participants over the next couple of years. “We have a number of target groups,” says Grainger.

the country is receiving significantly more rainfall. This can be seen from the rugby heartlands of Devon and Cornwall all the way to the north-west. “One thing we tend to get in the north is a greater percentage of one-pitch clubs, whereas down south you

“We have a significant number of women and girls

tend to get more two-, three- and four-pitch clubs. If

playing in certain areas of the country, but we also hope

to retain a lot more players in the 16-24 year-old bracket.

with only one pitch, then opportunities surrounding

That age group is critical for us to engage with.”

this are going to be much more limited.”

The first round of artificial pitches located in Preston,

by many as the most challenging element of managing

Aylesbury and Weston-super-Mare are scheduled to open

participation, and Grainger is convinced that the nature

for the end of November/early-December, and Grainger

of artificial grass pitches – which can be played on with

is confident that the increase in artificial surfaces, and

their perceived benefits, will be accepted and taken on

to take part at different times of the week that suit

board by the wider rugby community.

them, rather than being limited to weekend matches.

“If this investment proves successful we’ll do more,” he explains. “This is a long-term aim to see a greater spread

of rugby played on both natural turf and artificial pitches.

Weather also has a bearing, and Grainger is quick to

“In the future, when clubs start to think about

point out that research done by the RFU is not limited

resurfacing or expanding and enhancing their pitches

to population demographics, but also focuses on the

and facilities, they’ll think of artificial turf or some of

weather conditions of different parts of the country.

the hybrids coming onto the market. It’s part of the

“If you look at the statistics coming out of the Met Office it’s probably no surprise that the west of sportsmanagement.co.uk

transformation programme which is inevitably going to happen over the next couple of decades.” ● Issue 128  November/December 2016 65