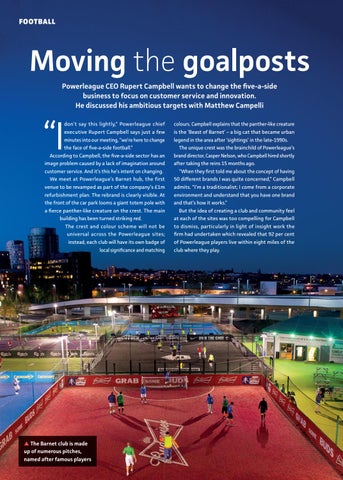 Moving the goalposts Powerleague CEO Rupert Campbell wants to change the five-a-side business to focus on customer service and innovation. He discussed his ambitious targets with Matthew Campelli

is the ‘Beast of Barnet’ – a big cat that became urban

minutes into our meeting, “we’re here to change

legend in the area after ‘sightings’ in the late-1990s.

the face of five-a-side football.”

According to Campbell, the five-a-side sector has an

image problem caused by a lack of imagination around customer service. And it’s this he’s intent on changing.

The unique crest was the brainchild of Powerleague’s brand director, Casper Nelson, who Campbell hired shortly after taking the reins 15 months ago. “When they first told me about the concept of having

We meet at Powerleague’s Barnet hub, the first

50 different brands I was quite concerned,” Campbell

venue to be revamped as part of the company’s £1m

admits. “I’m a traditionalist; I come from a corporate

refurbishment plan. The rebrand is clearly visible. At

environment and understand that you have one brand

and that’s how it works.”

a fierce panther-like creature on the crest. The main building has been turned striking red.

The crest and colour scheme will not be

to dismiss, particularly in light of insight work the

universal across the Powerleague sites;

firm had undertaken which revealed that 92 per cent

instead, each club will have its own badge of

of Powerleague players live within eight miles of the

 The Barnet club is made up of numerous pitches, named after famous players

club where they play.