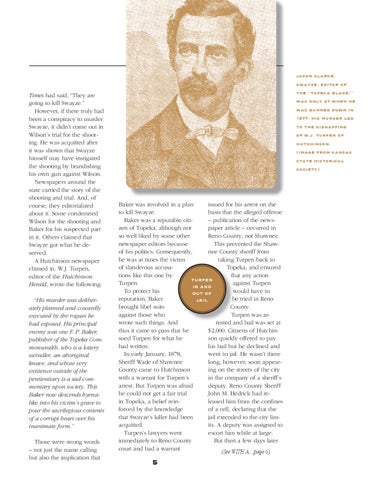 Times had said, “They are going to kill Swayze.” However, if there truly had been a conspiracy to murder Swayze, it didn’t come out in Wilson’s trial for the shooting. He was acquitted after it was shown that Swayze himself may have instigated the shooting by brandishing his own gun against Wilson. Newspapers around the state carried the story of the shooting and trial. And, of course, they editorialized about it. Some condemned Wilson for the shooting and Baker for his suspected part in it. Others claimed that Swayze got what he deserved. A Hutchinson newspaper chimed in. W.J. Turpen, editor of the Hutchinson Herald, wrote the following: “His murder was deliberately planned and cowardly executed by the rogues he had exposed. His principal enemy was one F. P. Baker, publisher of the Topeka Commonwealth, who is a lottery swindler, an aboriginal knave, and whose very existence outside of the penitentiary is a sad commentary upon society. This Baker now descends hyenalike into his victim’s grave to pour the sacrilegious contents of a corrupt heart over his inanimate form.” Those were strong words – not just the name calling but also the implication that

to the kidnapping of w.j. turpen of hutchinson. (image from kansas state historical society)

issued for his arrest on the Baker was involved in a plan basis that the alleged offense to kill Swayze. – publication of the newsBaker was a reputable citipaper article – occurred in zen of Topeka, although not Reno County, not Shawnee. so well liked by some other This prevented the Shawnewspaper editors because nee County sheriff from of his politics. Consequently, taking Turpen back to he was at times the victim Topeka, and ensured of slanderous accusathat any action tions like this one by turpen against Turpen Turpen. in and would have to To protect his out of be tried in Reno reputation, Baker jail County. brought libel suits Turpen was aragainst those who rested and bail was set at wrote such things. And $2,000. Citizens of Hutchinthus it came to pass that he son quickly offered to pay sued Turpen for what he his bail but he declined and had written. went to jail. He wasn’t there In early January, 1878, long, however, soon appearSheriff Wade of Shawnee ing on the streets of the city County came to Hutchinson in the company of a sheriff’s with a warrant for Turpen’s deputy. Reno County Sheriff arrest. But Turpen was afraid John M. Hedrick had rehe could not get a fair trial leased him from the confines in Topeka, a belief reinof a cell, declaring that the forced by the knowledge jail extended to the city limthat Swayze’s killer had been its. A deputy was assigned to acquitted. escort him while at large. Turpen’s lawyers went But then a few days later immediately to Reno County court and had a warrant

The Journal of the Reno County Historical Society

The Journal of the Reno County Historical Society