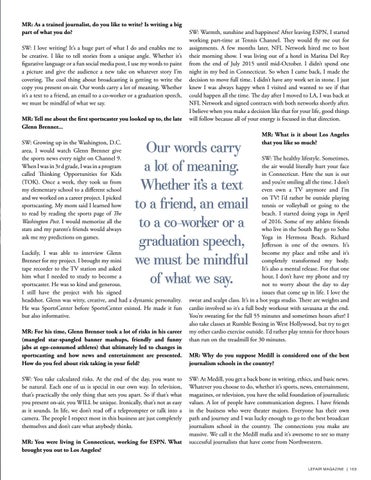 MR: As a trained journalist, do you like to write? Is writing a big part of what you do? SW: I love writing! It’s a huge part of what I do and enables me to be creative. I like to tell stories from a unique angle. Whether it’s figurative language or a fun social media post, I use my words to paint a picture and give the audience a new take on whatever story I’m covering. The cool thing about broadcasting is getting to write the copy you present on-air. Our words carry a lot of meaning. Whether it’s a text to a friend, an email to a co-worker or a graduation speech, we must be mindful of what we say. MR: Tell me about the first sportscaster you looked up to, the late Glenn Brenner... SW: Growing up in the Washington, D.C. area, I would watch Glenn Brenner give the sports news every night on Channel 9. When I was in 3r d grade, I was in a program called Thinking Opportunities for Kids (TOK). Once a week, they took us from my elementary school to a different school and we worked on a career project. I picked sportscasting. My mom said I learned how to read by reading the sports page of The Washington Post. I would memorize all the stats and my parent’s friends would always ask me my predictions on games.

SW: Warmth, sunshine and happiness! After leaving ESPN, I started working part-time at Tennis Channel. They would fly me out for assignments. A few months later, NFL Network hired me to host their morning show. I was living out of a hotel in Marina Del Rey from the end of July 2015 until mid-October. I didn’t spend one night in my bed in Connecticut. So when I came back, I made the decision to move full time. I didn’t have any work set in stone. I just knew I was always happy when I visited and wanted to see if that could happen all the time. The day after I moved to LA, I was back at NFL Network and signed contracts with both networks shortly after. I believe when you make a decision like that for your life, good things will follow because all of your energy is focused in that direction.

Our words carry a lot of meaning. Whether it’s a text to a friend, an email to a co-worker or a graduation speech, we must be mindful of what we say.

Luckily, I was able to interview Glenn Brenner for my project. I brought my mini tape recorder to the TV station and asked him what I needed to study to become a sportscaster. He was so kind and generous. I still have the project with his signed headshot. Glenn was witty, creative, and had a dynamic personality. He was SportsCenter before SportsCenter existed. He made it fun but also informative.

MR: For his time, Glenn Brenner took a lot of risks in his career (mangled star-spangled banner mashups, friendly and funny jabs at ego-consumed athletes) that ultimately led to changes in sportscasting and how news and entertainment are presented. How do you feel about risk taking in your field? SW: You take calculated risks. At the end of the day, you want to be natural. Each one of us is special in our own way. In television, that’s practically the only thing that sets you apart. So if that’s what you present on-air, you WILL be unique. Ironically, that’s not as easy as it sounds. In life, we don’t read off a teleprompter or talk into a camera. The people I respect most in this business are just completely themselves and don’t care what anybody thinks. MR: You were living in Connecticut, working for ESPN. What brought you out to Los Angeles?

MR: What is it about Los Angeles that you like so much?

SW: The healthy lifestyle. Sometimes, the air would literally hurt your face in Connecticut. Here the sun is out and you’re smiling all the time. I don’t even own a TV anymore and I’m on TV! I’d rather be outside playing tennis or volleyball or going to the beach. I started doing yoga in April of 2016. Some of my athlete friends who live in the South Bay go to Soho Yoga in Hermosa Beach. Richard Jefferson is one of the owners. It’s become my place and tribe and it’s completely transformed my body. It’s also a mental release. For that one hour, I don’t have my phone and try not to worry about the day to day issues that come up in life. I love the sweat and sculpt class. It’s in a hot yoga studio. There are weights and cardio involved so it’s a full body workout with savasana at the end. You’re sweating for the full 55 minutes and sometimes hours after! I also take classes at Rumble Boxing in West Hollywood, but try to get my other cardio exercise outside. I’d rather play tennis for three hours than run on the treadmill for 30 minutes. MR: Why do you suppose Medill is considered one of the best journalism schools in the country? SW: At Medill, you get a back bone in writing, ethics, and basic news. Whatever you choose to do, whether it’s sports, news, entertainment, magazines, or television, you have the solid foundation of journalistic values. A lot of people have communication degrees. I have friends in the business who were theater majors. Everyone has their own path and journey and I was lucky enough to go to the best broadcast journalism school in the country. The connections you make are massive. We call it the Medill mafia and it’s awesome to see so many successful journalists that have come from Northwestern.