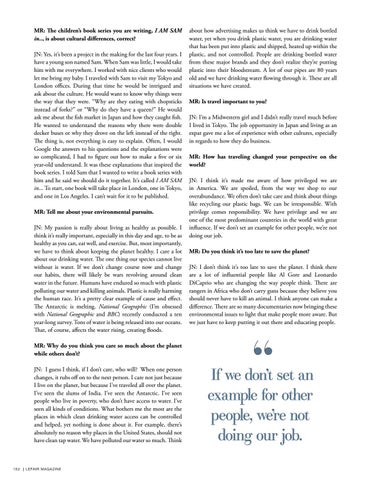 MR: The children’s book series you are writing, I AM SAM in.., is about cultural differences, correct? JN: Yes, it’s been a project in the making for the last four years. I have a young son named Sam. When Sam was little, I would take him with me everywhere. I worked with nice clients who would let me bring my baby. I traveled with Sam to visit my Tokyo and London offices. During that time he would be intrigued and ask about the culture. He would want to know why things were the way that they were. “Why are they eating with chopsticks instead of forks?” or “Why do they have a queen?” He would ask me about the fish market in Japan and how they caught fish. He wanted to understand the reasons why there were double decker buses or why they drove on the left instead of the right. The thing is, not everything is easy to explain. Often, I would Google the answers to his questions and the explanations were so complicated, I had to figure out how to make a five or six year-old understand. It was these explanations that inspired the book series. I told Sam that I wanted to write a book series with him and he said we should do it together. It’s called I AM SAM in... To start, one book will take place in London, one in Tokyo, and one in Los Angeles. I can’t wait for it to be published. MR: Tell me about your environmental pursuits. JN: My passion is really about living as healthy as possible. I think it’s really important, especially in this day and age, to be as healthy as you can, eat well, and exercise. But, most importantly, we have to think about keeping the planet healthy. I care a lot about our drinking water. The one thing our species cannot live without is water. If we don’t change course now and change our habits, there will likely be wars revolving around clean water in the future. Humans have endured so much with plastic polluting our water and killing animals. Plastic is really harming the human race. It’s a pretty clear example of cause and effect. The Antarctic is melting. National Geographic (I’m obsessed with National Geographic and BBC) recently conducted a ten year-long survey. Tons of water is being released into our oceans. That, of course, affects the water rising, creating floods.

about how advertising makes us think we have to drink bottled water, yet when you drink plastic water, you are drinking water that has been put into plastic and shipped, heated up within the plastic, and not controlled. People are drinking bottled water from these major brands and they don’t realize they’re putting plastic into their bloodstream. A lot of our pipes are 80 years old and we have drinking water flowing through it. These are all situations we have created. MR: Is travel important to you? JN: I’m a Midwestern girl and I didn’t really travel much before I lived in Tokyo. The job opportunity in Japan and living as an expat gave me a lot of experience with other cultures, especially in regards to how they do business. MR: How has traveling changed your perspective on the world? JN: I think it’s made me aware of how privileged we are in America. We are spoiled, from the way we shop to our overabundance. We often don’t take care and think about things like recycling our plastic bags. We can be irresponsible. With privilege comes responsibility. We have privilege and we are one of the most predominant countries in the world with great influence. If we don’t set an example for other people, we’re not doing our job. MR: Do you think it’s too late to save the planet? JN: I don’t think it’s too late to save the planet. I think there are a lot of influential people like Al Gore and Leonardo DiCaprio who are changing the way people think. There are rangers in Africa who don’t carry guns because they believe you should never have to kill an animal. I think anyone can make a difference. There are so many documentaries now bringing these environmental issues to light that make people more aware. But we just have to keep putting it out there and educating people.

MR: Why do you think you care so much about the planet while others don’t? JN: I guess I think, if I don’t care, who will? When one person changes, it rubs off on to the next person. I care not just because I live on the planet, but because I’ve traveled all over the planet. I’ve seen the slums of India. I’ve seen the Antarctic. I’ve seen people who live in poverty, who don’t have access to water. I’ve seen all kinds of conditions. What bothers me the most are the places in which clean drinking water access can be controlled and helped, yet nothing is done about it. For example, there’s absolutely no reason why places in the United States, should not have clean tap water. We have polluted our water so much. Think

If we don’t set an example for other people, we’re not doing our job.