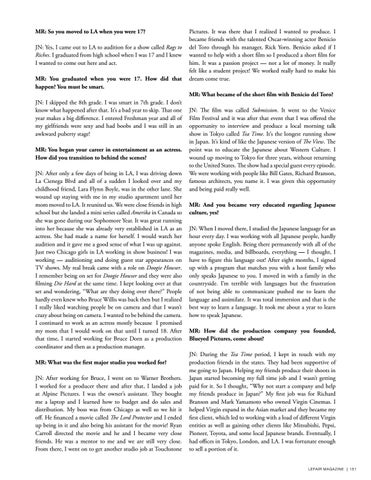 MR: So you moved to LA when you were 17? JN: Yes, I came out to LA to audition for a show called Rags to Riches. I graduated from high school when I was 17 and I knew I wanted to come out here and act. MR: You graduated when you were 17. How did that happen? You must be smart.

Pictures. It was there that I realized I wanted to produce. I became friends with the talented Oscar-winning actor Benicio del Toro through his manager, Rick Yorn. Benicio asked if I wanted to help with a short film so I produced a short film for him. It was a passion project — not a lot of money. It really felt like a student project! We worked really hard to make his dream come true. MR: What became of the short film with Benicio del Toro?

JN: I skipped the 8th grade. I was smart in 7th grade. I don’t know what happened after that. It’s a bad year to skip. That one year makes a big difference. I entered Freshman year and all of my girlfriends were sexy and had boobs and I was still in an awkward puberty stage! MR: You began your career in entertainment as an actress. How did you transition to behind the scenes? JN: After only a few days of being in LA, I was driving down La Cienega Blvd and all of a sudden I looked over and my childhood friend, Lara Flynn Boyle, was in the other lane. She wound up staying with me in my studio apartment until her mom moved to LA. It reunited us. We were close friends in high school but she landed a mini series called Amerika in Canada so she was gone during our Sophomore Year. It was great running into her because she was already very established in LA as an actress. She had made a name for herself. I would watch her audition and it gave me a good sense of what I was up against. Just two Chicago girls in LA working in show business! I was working — auditioning and doing guest star appearances on TV shows. My real break came with a role on Doogie Howser. I remember being on set for Doogie Howser and they were also filming Die Hard at the same time. I kept looking over at that set and wondering, “What are they doing over there?” People hardly even knew who Bruce Willis was back then but I realized I really liked watching people be on camera and that I wasn’t crazy about being on camera. I wanted to be behind the camera. I continued to work as an actress mostly because I promised my mom that I would work on that until I turned 18. After that time, I started working for Bruce Dorn as a production coordinator and then as a production manager. MR: What was the first major studio you worked for? JN: After working for Bruce, I went on to Warner Brothers. I worked for a producer there and after that, I landed a job at Alpine Pictures. I was the owner’s assistant. They bought me a laptop and I learned how to budget and do sales and distribution. My boss was from Chicago as well so we hit it off. He financed a movie called The Lord Protector and I ended up being in it and also being his assistant for the movie! Ryan Carroll directed the movie and he and I became very close friends. He was a mentor to me and we are still very close. From there, I went on to get another studio job at Touchstone

JN: The film was called Submission. It went to the Venice Film Festival and it was after that event that I was offered the opportunity to interview and produce a local morning talk show in Tokyo called Tea Time. It’s the longest running show in Japan. It’s kind of like the Japanese version of The View. The point was to educate the Japanese about Western Culture. I wound up moving to Tokyo for three years, without returning to the United States. The show had a special guest every episode. We were working with people like Bill Gates, Richard Branson, famous architects, you name it. I was given this opportunity and being paid really well. MR: And you became very educated regarding Japanese culture, yes? JN: When I moved there, I studied the Japanese language for an hour every day. I was working with all Japanese people, hardly anyone spoke English. Being there permanently with all of the magazines, media, and billboards, everything — I thought, I have to figure this language out! After eight months, I signed up with a program that matches you with a host family who only speaks Japanese to you. I moved in with a family in the countryside. I’m terrible with languages but the frustration of not being able to communicate pushed me to learn the language and assimilate. It was total immersion and that is the best way to learn a language. It took me about a year to learn how to speak Japanese. MR: How did the production company you founded, Blueyed Pictures, come about? JN: During the Tea Time period, I kept in touch with my production friends in the states. They had been supportive of me going to Japan. Helping my friends produce their shoots in Japan started becoming my full time job and I wasn’t getting paid for it. So I thought, “Why not start a company and help my friends produce in Japan?” My first job was for Richard Branson and Mark Yamamoto who owned Virgin Cinemas. I helped Virgin expand in the Asian market and they became my first client, which led to working with a load of different Virgin entities as well as gaining other clients like Mitsubishi, Pepsi, Pioneer, Toyota, and some local Japanese brands. Eventually, I had offices in Tokyo, London, and LA. I was fortunate enough to sell a portion of it. LE FA I R MA G A Z I NE | 1 5 1