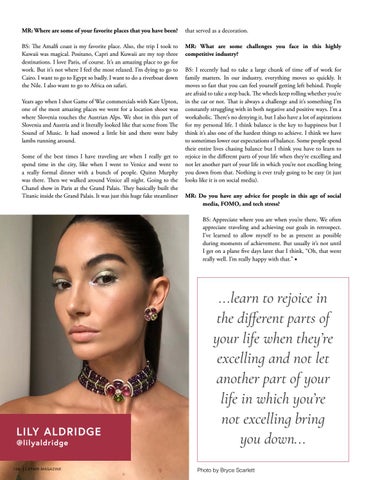 MR: Where are some of your favorite places that you have been?

that served as a decoration.

BS: The Amalfi coast is my favorite place. Also, the trip I took to Kuwaii was magical. Positano, Capri and Kuwaii are my top three destinations. I love Paris, of course. It’s an amazing place to go for work. But it’s not where I feel the most relaxed. I’m dying to go to Cairo. I want to go to Egypt so badly. I want to do a riverboat down the Nile. I also want to go to Africa on safari.

MR: What are some challenges you face in this highly competitive industry?

Years ago when I shot Game of War commercials with Kate Upton, one of the most amazing places we went for a location shoot was where Slovenia touches the Austrian Alps. We shot in this part of Slovenia and Austria and it literally looked like that scene from The Sound of Music. It had snowed a little bit and there were baby lambs running around. Some of the best times I have traveling are when I really get to spend time in the city, like when I went to Venice and went to a really formal dinner with a bunch of people. Quinn Murphy was there. Then we walked around Venice all night. Going to the Chanel show in Paris at the Grand Palais. They basically built the Titanic inside the Grand Palais. It was just this huge fake steamliner

BS: I recently had to take a large chunk of time off of work for family matters. In our industry, everything moves so quickly. It moves so fast that you can feel yourself getting left behind. People are afraid to take a step back. The wheels keep rolling whether you’re in the car or not. That is always a challenge and it’s something I’m constantly struggling with in both negative and positive ways. I’m a workaholic. There’s no denying it, but I also have a lot of aspirations for my personal life. I think balance is the key to happiness but I think it’s also one of the hardest things to achieve. I think we have to sometimes lower our expectations of balance. Some people spend their entire lives chasing balance but I think you have to learn to rejoice in the different parts of your life when they’re excelling and not let another part of your life in which you’re not excelling bring you down from that. Nothing is ever truly going to be easy (it just looks like it is on social media). MR: Do you have any advice for people in this age of social media, FOMO, and tech stress? BS: Appreciate where you are when you’re there. We often appreciate traveling and achieving our goals in retrospect. I’ve learned to allow myself to be as present as possible during moments of achievement. But usually it’s not until I get on a plane five days later that I think, “Oh, that went really well. I’m really happy with that.” ■

...learn to rejoice in the different parts of your life when they’re excelling and not let another part of your life in which you’re not excelling bring you down... Photo by Bryce Scarlett