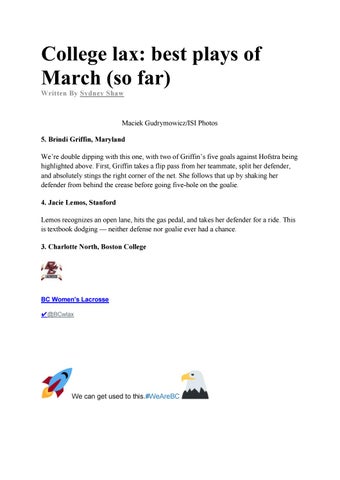 Maciek Gudrymowicz/ISI Photos 5. Brindi Griffin, Maryland We’re double dipping with this one, with two of Griffin’s five goals against Hofstra being highlighted above. First, Griffin takes a flip pass from her teammate, split her defender, and absolutely stings the right corner of the net. She follows that up by shaking her defender from behind the crease before going five-hole on the goalie. 4. Jacie Lemos, Stanford Lemos recognizes an open lane, hits the gas pedal, and takes her defender for a ride. This is textbook dodging — neither defense nor goalie ever had a chance. 3. Charlotte North, Boston College

We can get used to this.#WeAreBC

96 people are talking about this

An absolute LASER off of a free position shot from one of the best sticks in the game. The goalie doesnâ&#x20AC;&#x2122;t see it coming, and we certainly donâ&#x20AC;&#x2122;t blame her. 2. Mikaela Watson, Stanford Watson makes this one look absolutely effortless as she cruises from one end of the field to the other, burying a defender before burying her shot. 1. Megan Kinna, Northwestern

Kinna quickly returns the favor for Northwestern, catching the rebound against Stanford before scoring with one of the smoothest behind-the-backs youâ&#x20AC;&#x2122;ll see all season. Source: https://www.justwomenssports.com/reads/college-lax-best-plays-of-march-so-far 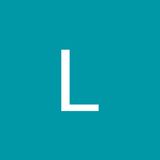 College Best players reaction on pause in the Game

College Best players reaction on pause in the Game