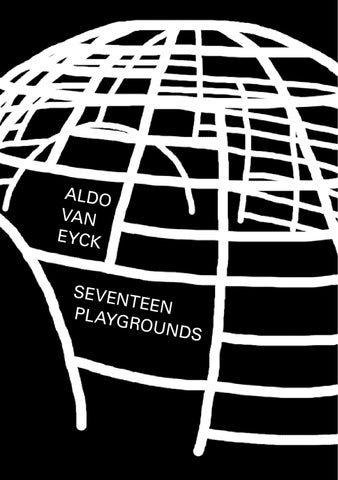 We—Denisa Kollarova and Anna van Lingen—live in an era in which there are not many carefully constructed playgrounds. We don’t like what we see. Have we—city decision makers, architects, designers, parents, friends —forgotten to be critical? There are so many architects, artists and thinkers of the past who have proven that a playground can be much more than just generic plastic structures placed randomly, constructed by simply flipping through the pages of play equipment catalogues. One of them is Aldo van Eyck, who designed a large number of public playgrounds for the city of Amsterdam. His playgrounds are something that all children growing up in Amsterdam in the ‘50s, 60’s and 70’s are familiar with. They played in the concrete sandpits, hung upside down on the tumbling bars or invented games in the igloo shaped climbing frames. Van Eyck’s playgrounds were a recognizable aspect 4

Aldo van Eyck, Seventeen Playgrounds is a tour guide that brings you to several of these playgrounds in the centre of Amsterdam. The publication consists of seventeen chapters; per location we ‘guide’ you through a certain aspect of Aldo van Eyck’s designs for children. Some of the playgrounds in this book are still intact, others share their space with new play equipment and some have completely been modernized, only referring to Van Eyck with a lost climbing frame or a few jumping stones and the fact that a playground remains on a spot that Van Eyck once turned into a play space. Today his playgrounds are rapidly disappearing and a new type of play equipment is taking over. Bright colours, plastic structures and animal-shaped elements seem to have set the tone, 5

of the city and at a certain moment there were over seven hundred different playgrounds throughout Amsterdam.

Westerpark From Functionalism to Structuralism

Rijksmuseum In the Museum

Lepelstraat For All Generations

1. Aldo van Eyck Aldo van Eyck was born on March 16, 1918 in Driebergen in the Netherlands as son of the poet Pieter Nicolaas van Eyck and Nelly Estelle Benjamins. At the age of one the family moved to London where Aldo van Eyck grew up until he went back to the Netherlands to study at the Royal Academy of Arts in The Hague. After two years in The Hague he continued studying architecture at the Eidgenössische Technische Hochschule in Zürich where he met Carola GiedionWelcker, who introduced him to many avant-garde artists. He married his fellow student Hannie van Rooijen with whom he later had two children. When they moved to Amsterdam, Van Eyck started working for the Urban Development Department of the city’s Department of Public Works under the direction of Cor van Eesteren and Jacoba Mulder. During his period at the Department he designed a large number of public playgrounds for the city, which he continued doing after he stopped working 12

Aldo van Eyck was an active member of the CIAM (International Congresses of Modern Architecture), later co-founder of Team X and one of the first and most influential representatives of Structuralism. His best-known work is the Municipal Orphanage of Amsterdam, which gained him international recognition. Besides his work as an architect Aldo van Eyck taught at the Amsterdam Academy of Architecture and was professor at the Delft University of Technology.

for the city of Amsterdam in 1951 to start his own bureau.

2. From Functionalism to Structuralism After the Second World War the Dutch housing stock was both quantitatively and qualitatively falling short and on top of that Dutch cities had to deal with the post-war baby boom. Urban planning in the Netherlands needed to solve these problems and did so based on ideals of the modernist movement grouped around the CIAM. The Urban Development Department of Amsterdam had already developed a General Expansion plan for the city in 1935 and was now continuing its execution. This plan was a typical example of the twentieth century’s sober functionalism in architecture. It followed the modernist idea that the functions living, working, recreation and traffic needed to be separated and realised building blocks in open green areas. These new areas were presented as the ‘ideal towns of the future’ and were produced quickly. Meanwhile the city centre was in a state of neglect and needed a lot of improvement. The city council of Amsterdam considered demolishing 16

the Jordaan and the Nieuwmarktbuurt to reconstruct them according to the same functionalist ideas that were used in the General Expansion Plan, but were confronted with gigantic protests and needed to cancel their plans. Instead they chose to preserve the centre and gave Aldo van Eyck the task to make a less drastic urban renewal plan for the Nieuwmarktbuurt. Even though Van Eyck was a member of the CIAM, he criticized the extreme functionalism in post-war town planning for lacking originality. He pleaded for a humane architecture in which the human scale was more visible. Within the CIAM the younger generation, including Van Eyck, formed Team X that eventually took over the CIAM in 1959. In that same year Jaap Bakema and Aldo van Eyck took over the editorship of the Dutch magazine Forum, which became their platform to promote a new architectural movement: Structuralism.

3. Children’s Play Aldo van Eyck was closely linked to the Cobra group that was founded in 1948. He shared their fascination for children’s drawings and primitive art for their liberating simplicity and purity. Inspired by this purity the Cobra artists made childlike expressive and colourful drawings with typical subject matter as animals or fantasy creatures. In 1949 Aldo van Eyck designed a Cobra exhibition for the Stedelijk Museum Amsterdam. The group dissolved within three years, but Van Eyck kept a close connection to Cobra artist Constant Nieuwenhuys. He assisted Constant with his utopian work New Babylon that was inspired by the book Homo Ludens written by the Dutch historian Johan Huizinga in 1938. This book stresses the importance of the element of play in culture and society. Constant worked on the project from 1954 until 1969. With New Babylon he envisioned a city for the future, designed for the ‘Homo Ludens’, who was freed from work and led a life of creative play. 20

Youth and the element of play in daily life became widely appreciated in several cultural fields and also in social sciences the child gained a more important status. Johan Huizingaâ&#x20AC;&#x2122;s book was just as influential as the work of the American paediatrician Benjamin Spock. In 1946 he published the bestseller Baby and Child Care in which he advised parents to be more flexible with their children and to treat their children as individuals. Gradually children became accepted as integral members of society.

4. Making Playgrounds Public After many complaints about poor playing conditions for children in Amsterdam, upper-class citizens created the first playground of the city in 1880 on the Eerste Weteringplantsoen. Not much later a few playground-trusts arose throughout the city. Access to these supervised and closed-off playgrounds was restricted by membership. Apart from these there were barely any public playgrounds. Children played in the cityâ&#x20AC;&#x2122;s parks with its many rules, on unsafe construction sites and on the streets. But the latter became difficult with the increasing number of cars that slowly drove them off the streets. Furthermore the post-war baby boom created a need for more space and better playing conditions for the cityâ&#x20AC;&#x2122;s children: it became clear that changes had to be made. Jakoba Mulder, second in charge of the Public Works Department, started the process of making playgrounds public. In 1947 she commissioned Van Eyck to design the first public playground, 24

an experiment that became a huge success. From then on the department made sure that each neighbourhood was provided with at least one public playground. In total Van Eyck designed over seven hundred playgrounds (19471978) that together created a web throughout Amsterdam, giving children their own recognizable domain in the city.

5. The Locations The Urban Development Department wanted each neighbourhood in Amsterdam to have its own public playground and gave the Site Preparation Service the task to designate the terrains that could be used to realize this plan. Locations were found throughout the various parks of Amsterdam and on the traditional squares in the middle of housing blocks in the older parts of the city centre, such as here at the Herenmarkt. Sometimes room was made by broadening the sidewalk or even with the creation of a square where traffic intersections used to be. Truly remarkable is the fact that the playgrounds were often placed on derelict sites previously used as garbage dumps or hidden behind a fence, surrounded by old walls and ramshackle buildings. Van Eyck transformed these overlooked spaces into intimate places where social interaction could take place, and by doing so changed the citiesâ&#x20AC;&#x2122; urban and social landscape.

In contrast to the authoritarian topdown town planning of the Urban Development Department, Aldo van Eyck adjusted his designs to the already existing urban layout. By focussing on the public playgrounds he didn’t have to participate in the development of the town planning of Van Eesteren with which he didn’t fully agree. Where at first he built his web of playgrounds by filling up spaces in the city centre, they became an integral part of the design for the post-war expansion areas in western Amsterdam in the course of the 50’s.