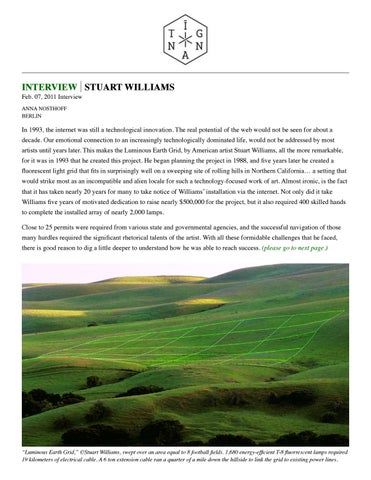 In 1993, the internet was still a technological innovation. The real potential of the web would not be seen for about a

decade. Our emotional connection to an increasingly technologically dominated life, would not be addressed by most

artists until years later. This makes the Luminous Earth Grid, by American artist Stuart Williams, all the more remarkable, for it was in 1993 that he created this project. He began planning the project in 1988, and five years later he created a

would strike most as an incompatible and alien locale for such a technology-focused work of art. Almost ironic, is the fact that it has taken nearly 20 years for many to take notice of Williams’ installation via the internet. Not only did it take

Williams five years of motivated dedication to raise nearly $500,000 for the project, but it also required 400 skilled hands to complete the installed array of nearly 2,000 lamps.

Close to 25 permits were required from various state and governmental agencies, and the successful navigation of those many hurdles required the significant rhetorical talents of the artist. With all these formidable challenges that he faced, there is good reason to dig a little deeper to understand how he was able to reach success. (please go to next page.)

“Luminous Earth Grid,” ©Stuart Williams, swept over an area equal to 8 football fields. 1,680 energy-efficient T-8 fluorrescent lamps required 19 kilometers of electrical cable. A 6 ton extension cable ran a quarter of a mile down the hillside to link the grid to existing power lines.

iGNANT: Could you first explain the very basic idea behind your project “luminous earth grid”? Stuart Williams: I see it as a poetic vision of the potential harmony between technology and nature. The glowing green grid can be seen as an icon of computer imaging technology, which in this “real life” incarnation, gently melds with the flowing shape of a lovely landscape... a dream like vision of symbiotic unity.

iGNANT: Would you rather say it’s about contrasting or unifying things? Stuart Williams: It’s about both… let me explain. As an artist, I’m interested in visual contrasts… natural and man made, real and surreal, old and new, rural and urban. But those contrasts do not need to have anything to do with being separate

or apart. In fact, it is the underlying and perennial interconnectedness of all things that is of the highest interest to me. So

many people have long thought of technology as evil and nature as good. But when they are brought together in a thoughtful and compatible way, the whole truly becomes greater than the sum of the parts. And now this is becoming increasingly

evident, with the ever growing awareness of the pressing need to go green with renewable energy and green architecture.

iGNANT: The project already started in 1993, at a time where the internet had just started to gain in importance. Back then the whole issue was certainly not as widely reflected as it is today. You seemed to be ahead of things … Stuart Williams: First, let me say that I actually started working on the project in 1989, and it took five years to raise

the needed funds. It also took several years to obtain more than two dozen permits from the state. I wish that the internet had been widely in use in 1993, as that would have allowed so many more people to have been aware of the project.

iGNANT: What did you find most inspiring about the project back then in 1993? Stuart Williams: One of the most inspiring moments came when a woman dressed in a bath robe and wearing curlers

in her hair, ran up to me at the site one night, saying, “Oh, are you the artist? Oh, I don’t know anything about art, but

it’s so beautiful it made me cry.” At that moment I thought to myself: Wow - if this person can so strongly respond to this

project, then I think it has truly been a success. I mean, the real power of public art is that people can simply stumble upon it even if they rarely go to a museum or gallery.

iGNANT: What do you find most inspiring about the project today, if you look back? Stuart Williams: The same thing as in 1993. And the fact that a both ambitious and whimsical idea — which came to

me in a flash, as I sat watching the sunset one night in Los Angeles - finally became a reality nearly a decade later.

iGNANT: Just to give our readers a better idea of the projects dimension: Any guess on the amount of working hours spent from the very beginning until the end? Stuart Williams: Approximately 20,000 person hours of labor were expended. It took a team of 12 people, one month

to pre-assemble various electrical components off-site. Then it took another month to assemble the project on site. We

worked primarily on weekends, as many of the workers were volunteers. In total, about 200 individuals helped assemble the project. The installation was in place for one month. It then took about five days to remove everything from the site.

All lamps were donated to the public schools in the nearest small town of Benecia, California. All other materials, such as

iGNANT: How about the actual size of the installation? Stuart Williams: The grid measured 183 x 183 meters. The total area equaled 33,489 square meters which is equal to

For a sense of scale, note the herd of cattle grazing just above the grid.

iGNANT: The weight of cables used? Stuart Williams: 19 kilometers of electrical wiring were required for the project, as well as 4.8 kilometers of pvc

conduit. I am not sure of the weight of that copper wiring. However, the copper extension cable that ran nearly one

kilometer down the mountainside to the nearest available power lines weighed 5454 kilograms. It was the diameter of a

man’s arm. This special solid-copper cable was loaned to us by the U.S. Naval Shipyards in Vallejo, California. It’s called “shore-power cable,” and is used to power submarines when they are in port for repairs. It was valued at $50,000.

bottled water, and nearly 100 cases of water were donated to the project by a local mineral water distributor.

iGNANT: What was the most challenging part of the project? Stuart Williams: This is a VERY BIG question… there were untold challenges. One of the biggest challenges was the

need to electrify nearly 2,000 lamps, on the wet ground, and in the rainy season. And… all this took place on an active

cattle ranch. More than one person was charged by a bull, as we had to walk about 1 kilometer up the mountainside to get to the grid site. The immediate grid site was surrounded by a solar-powered electric fence, to keep the cattle from walking through the grid, and thereby tripping on the glass fluorescent lamps, given that the entire array of lamps was elevated

30 centimeters above the ground. Other challenges included obtaining nearly 25 permits from the state of California, and

from Solano County, and also from the California Highway Patrol… not to mention spending 5 years raising nearly half a million dollars in order to complete the project.

iGNANT: What were those permissions from the state all about? Stuart Williams: Many permits were required from various governmental agencies. The difficulties of obtaining

governmental permits were many… there was just a general reluctance to be supportive of something that seemed so odd and unusual to most of the governmental agencies whose permission I needed. The site was located in a rural area 50

miles north of San Francisco. So the notion of an artist from New York wanting to place nearly 2,000 electric lamps on

a mountainside, struck most governmental workers as extremely bizarre. The California Highway Patrol was concerned

about distracted drivers, as they motored by on the adjacent freeway. The Solano County Planning Bureau was concerned about the fact that they could not easily classify the project, so their initial reaction was to just say no. Over a period of

four years of appealing for their approval, they finally said yes. I literally had to get to know them, before they began to embrace the whole idea. In addition, I had to get approval from the cattle rancher who owned the land. That is another

story, and it also took 4 years for him to finally say yes. It was a very drawn out political process, and I learned the art of both patience and gentle persuasion.

iGNANT: What made you choose California as a spot for the installation? Stuart Williams: The primary reason is that I love the magnificent landscapes of California. I have lived in both San

Francisco and Los Angeles, so I know the state well. Specifically, the rolling hills of northern, coastal California have

always enchanted me. For many years I had wanted to create some kind of site-installation on those hills. In the winter they turn lushly green, and their unique shape has the sensual beauty of a naked body.

iGNANT: Can you remember a very relieving moment? Stuart Williams: Yes… there were many. I guess the biggest moment of relief was when we finally obtained the last

donation of support which allowed the project to go forward. There was a recession in California in the early 1990’s, and that added to the challenges of raising a significant amount of money.

iGNANT: … a very enjoyable one? Stuart Williams: There were many as well. The opening night was thrilling for me, and I think, as well, for all those

dedicated individuals who helped make the project a reality. Dozens of reporters, and television helicopters swarmed

around the site. Meanwhile, hundreds of people had parked their cars along the freeway in order to step out and look up the mountainside at this strangely glowing apparition. One woman said, “it looks like an electronic quilt lying on the hills… it’s lovely.”

iGNANT: If your project was supposed to have a sound track, which song would you choose? Why? Stuart Williams: If I had to choose a song, it would be “DIVORCE,” by Tammy Wynette. The reason is that one of

the electricians usually had a transistor radio with him, and it was often tuned to a local country music station. I just remember hearing that song more than once while working on the site.

Stuart Williams lives and works in New York City. His environmental art installations have been critically acclaimed around the globe. Website: www.stuartwilliamsart.com All photos © Craig Collins

Review and interview with Williams about his electrified installation, "Luminous Earth Grid," which swept over an area equal to 8 football fields in Northern California.