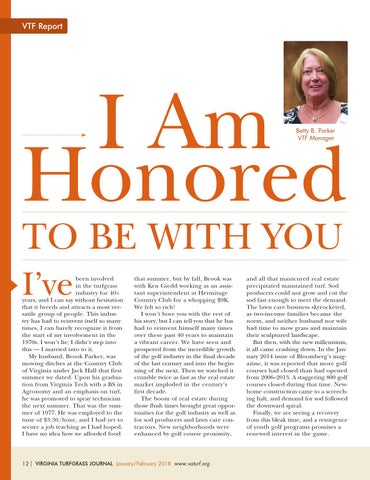 I Am Honored Betty B. Parker VTF Manager

TO BE WITH YOU I’ve

been involved in the turfgrass industry for 40+ years, and I can say without hesitation that it breeds and attracts a most versatile group of people. This industry has had to reinvent itself so many times, I can barely recognize it from the start of my involvement in the 1970s. I won’t lie; I didn’t step into this — I married into to it. My husband, Brook Parker, was mowing ditches at the Country Club of Virginia under Jack Hall that first summer we dated. Upon his graduation from Virginia Tech with a BS in Agronomy and an emphasis on turf, he was promoted to spray technician the next summer. That was the summer of 1977. He was employed to the tune of $3.30/hour, and I had yet to secure a job teaching as I had hoped. I have no idea how we afforded food

that summer, but by fall, Brook was with Ken Giedd working as an assistant superintendent at Hermitage Country Club for a whopping $9K. We felt so rich! I won’t bore you with the rest of his story, but I can tell you that he has had to reinvent himself many times over these past 40 years to maintain a vibrant career. We have seen and prospered from the incredible growth of the golf industry in the final decade of the last century and into the beginning of the next. Then we watched it crumble twice as fast as the real estate market imploded in the century’s first decade. The boom of real estate during those flush times brought great opportunities for the golf industry as well as for sod producers and lawn care contractors. New neighborhoods were enhanced by golf course proximity,

and all that manicured real estate precipitated maintained turf. Sod producers could not grow and cut the sod fast enough to meet the demand. The lawn care business skyrocketed, as two-income families became the norm, and neither husband nor wife had time to mow grass and maintain their sculptured landscape. But then, with the new millennium, it all came crashing down. In the January 2014 issue of Bloomberg’s magazine, it was reported that more golf courses had closed than had opened from 2006–2013. A staggering 800 golf courses closed during that time. Newhome construction came to a screeching halt, and demand for sod followed the downward spiral. Finally, we are seeing a recovery from this bleak time, and a resurgence of youth golf programs promises a renewed interest in the game.