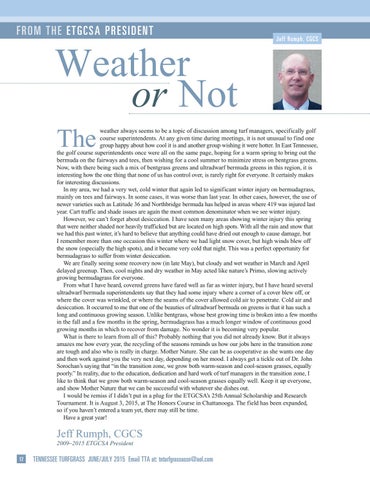 Weather or Not The

weather always seems to be a topic of discussion among turf managers, specifically golf course superintendents. At any given time during meetings, it is not unusual to find one group happy about how cool it is and another group wishing it were hotter. In East Tennessee, the golf course superintendents once were all on the same page, hoping for a warm spring to bring out the bermuda on the fairways and tees, then wishing for a cool summer to minimize stress on bentgrass greens. Now, with there being such a mix of bentgrass greens and ultradwarf bermuda greens in this region, it is interesting how the one thing that none of us has control over, is rarely right for everyone. It certainly makes for interesting discussions. In my area, we had a very wet, cold winter that again led to significant winter injury on bermudagrass, mainly on tees and fairways. In some cases, it was worse than last year. In other cases, however, the use of newer varieties such as Latitude 36 and Northbridge bermuda has helped in areas where 419 was injured last year. Cart traffic and shade issues are again the most common denominator when we see winter injury. However, we can’t forget about desiccation. I have seen many areas showing winter injury this spring that were neither shaded nor heavily trafficked but are located on high spots. With all the rain and snow that we had this past winter, it’s hard to believe that anything could have dried out enough to cause damage, but I remember more than one occasion this winter where we had light snow cover, but high winds blew off the snow (especially the high spots), and it became very cold that night. This was a perfect opportunity for bermudagrass to suffer from winter desiccation. We are finally seeing some recovery now (in late May), but cloudy and wet weather in March and April delayed greenup. Then, cool nights and dry weather in May acted like nature’s Primo, slowing actively growing bermudagrass for everyone. From what I have heard, covered greens have fared well as far as winter injury, but I have heard several ultradwarf bermuda superintendents say that they had some injury where a corner of a cover blew off, or where the cover was wrinkled, or where the seams of the cover allowed cold air to penetrate. Cold air and desiccation. It occurred to me that one of the beauties of ultradwarf bermuda on greens is that it has such a long and continuous growing season. Unlike bentgrass, whose best growing time is broken into a few months in the fall and a few months in the spring, bermudagrass has a much longer window of continuous good growing months in which to recover from damage. No wonder it is becoming very popular. What is there to learn from all of this? Probably nothing that you did not already know. But it always amazes me how every year, the recycling of the seasons reminds us how our jobs here in the transition zone are tough and also who is really in charge. Mother Nature. She can be as cooperative as she wants one day and then work against you the very next day, depending on her mood. I always get a tickle out of Dr. John Sorochan’s saying that “in the transition zone, we grow both warm-season and cool-season grasses, equally poorly.” In reality, due to the education, dedication and hard work of turf managers in the transition zone, I like to think that we grow both warm-season and cool-season grasses equally well. Keep it up everyone, and show Mother Nature that we can be successful with whatever she dishes out. I would be remiss if I didn’t put in a plug for the ETGCSA’s 25th Annual Scholarship and Research Tournament. It is August 3, 2015, at The Honors Course in Chattanooga. The field has been expanded, so if you haven’t entered a team yet, there may still be time. Have a great year!