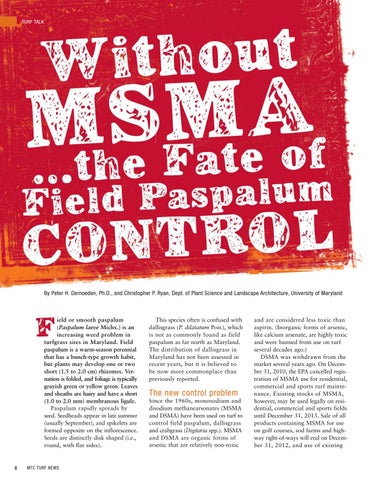 ield or smooth paspalum (Paspalum laeve Michx.) is an increasing weed problem in turfgrass sites in Maryland. Field paspalum is a warm-season perennial that has a bunch-type growth habit, but plants may develop one or two short (1.5 to 2.0 cm) rhizomes. Vernation is folded, and foliage is typically grayish green or yellow green. Leaves and sheaths are hairy and have a short (1.0 to 2.0 mm) membranous ligule. Paspalum rapidly spreads by seed. Seedheads appear in late summer (usually September), and spikelets are formed opposite on the inflorescence. Seeds are distinctly disk shaped (i.e., round, with flat sides).

This species often is confused with dallisgrass (P. dilatatum Poir.), which is not as commonly found as field paspalum as far north as Maryland. The distribution of dallisgrass in Maryland has not been assessed in recent years, but it is believed to be now more commonplace than previously reported.

The new control problem Since the 1960s, monosodium and disodium methanearsonates (MSMA and DSMA) have been used on turf to control field paspalum, dallisgrass and crabgrass (Digitaria spp.). MSMA and DSMA are organic forms of arsenic that are relatively non-toxic

and are considered less toxic than aspirin. (Inorganic forms of arsenic, like calcium arsenate, are highly toxic and were banned from use on turf several decades ago.) DSMA was withdrawn from the market several years ago. On December 31, 2010, the EPA cancelled registration of MSMA use for residential, commercial and sports turf maintenance. Existing stocks of MSMA, however, may be used legally on residential, commercial and sports fields until December 31, 2013. Sale of all products containing MSMA for use on golf courses, sod farms and highway right-of-ways will end on December 31, 2012, and use of existing