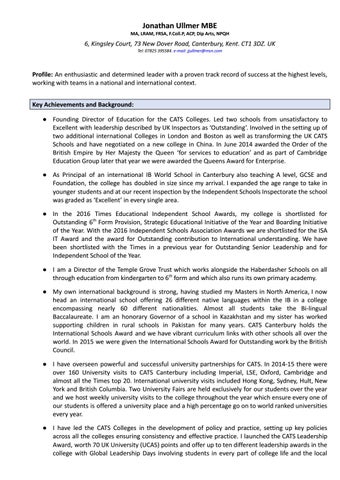 Profile: An enthusiastic and determined leader with a proven track record of success at the highest levels, working with teams in a national and international context. Key Achievements and Background: ● Founding Director of Education for the CATS Colleges. Led two schools from unsatisfactory to Excellent with leadership described by UK Inspectors as ‘Outstanding’. Involved in the setting up of two additional international Colleges in London and Boston as well as transforming the UK CATS Schools and have negotiated on a new college in China. In June 2014 awarded the Order of the British Empire by Her Majesty the Queen ‘for services to education’ and as part of Cambridge Education Group later that year we were awarded the Queens Award for Enterprise. ● As Principal of an international IB World School in Canterbury also teaching A level, GCSE and Foundation, the college has doubled in size since my arrival. I expanded the age range to take in younger students and at our recent inspection by the Independent Schools Inspectorate the school was graded as ‘Excellent’ in every single area. ● In the 2016 Times Educational Independent School Awards, my college is shortlisted for Outstanding 6th Form Provision, Strategic Educational Initiative of the Year and Boarding Initiative of the Year. With the 2016 Independent Schools Association Awards we are shortlisted for the ISA IT Award and the award for Outstanding contribution to International understanding. We have been shortlisted with the Times in a previous year for Outstanding Senior Leadership and for Independent School of the Year. ● I am a Director of the Temple Grove Trust which works alongside the Haberdasher Schools on all through education from kindergarten to 6th form and which also runs its own primary academy. ● My own international background is strong, having studied my Masters in North America, I now head an international school offering 26 different native languages within the IB in a college encompassing nearly 60 different nationalities. Almost all students take the Bi-lingual Baccalaureate. I am an honorary Governor of a school in Kazakhstan and my sister has worked supporting children in rural schools in Pakistan for many years. CATS Canterbury holds the International Schools Award and we have vibrant curriculum links with other schools all over the world. In 2015 we were given the International Schools Award for Outstanding work by the British Council. ● I have overseen powerful and successful university partnerships for CATS. In 2014-15 there were over 160 University visits to CATS Canterbury including Imperial, LSE, Oxford, Cambridge and almost all the Times top 20. International university visits included Hong Kong, Sydney, Hult, New York and British Columbia. Two University Fairs are held exclusively for our students over the year and we host weekly university visits to the college throughout the year which ensure every one of our students is offered a university place and a high percentage go on to world ranked universities every year. ● I have led the CATS Colleges in the development of policy and practice, setting up key policies across all the colleges ensuring consistency and effective practice. I launched the CATS Leadership Award, worth 70 UK University (UCAS) points and offer up to ten different leadership awards in the college with Global Leadership Days involving students in every part of college life and the local

and international community. I have written and implemented development plans for CATS Boston, London, Cambridge and Canterbury. ● Working with IT staff, I designed the Management Information system for the CATS Colleges from an educational and boarding perspective ensuring effective and holistic links between boarding, welfare and academic staff. I have also implemented integrated electronic systems linking school self evaluation, lesson observations, development plans and performance management to embed Quality Assurance processes. I piloted and designed the system for Independent Schools to do this with GL Assessment and we are part of a new electronic pilot for SISRA – an on line system to link lesson walkthroughs with detailed school performance data. These systems have developed openness and transparency in planning and allowed staff at all levels to gain ownership of the evaluative framework. ● From early work with the UK Dept for Education ‘Four Counties Project’ I implemented a system of targeting individual students for intervention strategies which resulted in a 10% improvement in results. Mine was the only area in the DfE project which showed demonstrable improvement. Since then I have implemented these strategies with effective use of data in the CATS colleges with marked improvements in both exam results and value added for all students. Exam results at CATS Canterbury with a non-selective intake have increased every year and currently stand at 96% A*-B at A level and IB average points scores well above world levels. Value added at IB increased by 21% this year, and in a range of grade boundaries, value added ranged from 10-30%. ● Strategies to improve teaching have borne strong success. From 35% of lessons requiring improvement in 2010, now 100% of lessons have been graded Good or Outstanding. We successfully run the ‘Outstanding Teacher Programme’, have research links and projects with Christchurch University, and our staff lead training sessions for both private and state schools in the area on excellent practice. My key staff have all completed training in leadership with University College London and teaching at the school has been rated as ‘Excellent’. ● I implemented the transition of the successful CATS Canterbury University Foundation Programme so it is now offered across all three UK colleges, writing the Quality Assurance Manual and setting up links with external moderators and ensuring university validation. The programme is the only school Foundation course accepted by Kings College London and sends students to all the Times top universities with the exception of Oxbridge. ● I am particularly proud of our work on Student Voice where both our intranet and CATS App include the ‘Tell Us’ button where students can give positive or negative feedback and get a reply back within 24 hours. We were given an Award of Excellence from ISA for this work, and our Boarding at CATS Canterbury has been regularly rated as Excellent by Inspectors. Community achievements and evidence of wider community service ● Led over 50 school and community projects in the greater Southend area including Borough wide Events. Liaised with local industry, churches, schools and organisations, and involved over 25,000 people attending or participating. Oversaw a major Borough Arts Event with local churches in July for 4 years, which in its final year attracted 8000 people. ● Chair of Love Southend. Led core team linked to 85 Borough organisations including the Council, Voluntary Organisations and the Police. Developed regular regeneration work in the community involving 400 young people. Strategic oversight of 60 events or initiatives in Southend area. ● Leadership experience in other areas has included chairing the Trustees of a Southend Counselling Service for ten years. The service has increased in size by 700% and is used heavily by the NHS and Social Services for referrals. Founder Trustee and Director of Community Partnership which won £1.8 million of regeneration funding. Member of Borough Panel to help distribute UK Government Regeneration Funding.

Teacher of English and Drama

Associate of the College of Preceptors

Institute for Arts in Education and Therapy

Diploma in the Therapeutic and Educational Application of the Arts

Education Extra – award for community arts Gold Artsmark. One of first schools in the country to be given top award from Arts Council of England. Community Education - Headed Bid to win £25,000 for School Arts and Community work Performance Related Pay - one of the first teachers in the UK to receive PRP for teaching skills. National Drama Award - one of three schools in the UK to receive funding for an exciting community arts project involving drama. Arts Industry Award - special TVEI funding to run an arts project linking with local industry and the Towngate Theatre, Basildon. Fellow of the College of Preceptors for contributions to education and published work. English Speaking Union Scholarship, Chautauqua Award to study and research teaching in American Universities, Colleges and Schools and compare with UK models.

Meet more about the founder of Excellence In Schools Jonathan Ullmer MBE from Essex, UK. Aside from receiving many awards for his work in United Kingdom education, Ullmer was awarded the Order of the British Empire by Her Majesty the Queen for services to education in the country. He is also the principal of an IB World School in Canterbury, helping to expand age ranges to encourage more educational opportunities. 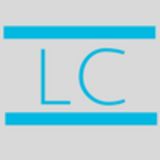