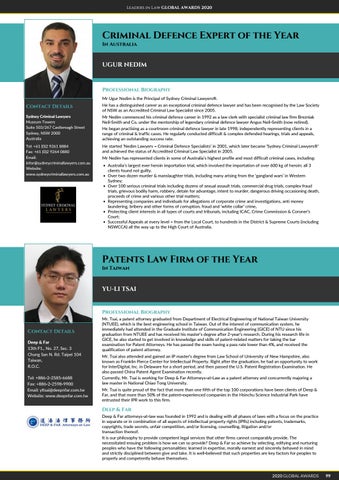 Mr Ugur Nedim is the Principa of Sydney Crimina Lawyers .

He has a distinguished career as an exceptiona crimina defence awyer and has been recognised by the Law Society of NSW as an Accredited Crimina Law Specia ist since .

Mr. Tsai, a patent attorney graduated from Department of E ectrica Engineering of Nationa Taiwan University NTUEE , which is the best engineering schoo in Taiwan. Out of the interest of communication system, he immediate y had attended in the Graduate Institute of Communication Engineering GICE of NTU since his graduation from NTUEE and has received his master’s degree after year’s research. During his research ife in GICE, he a so started to get invo ved in know edge and ski s of patent re ated matters for taking the bar examination for Patent Attorneys. He has passed the exam having a pass rate ower than , and received the qua ification of patent attorney. Mr. Tsai a so attended and gained an IP master’s degree from Law Schoo of University of New Hampshire, a so known as Frank in Pierce Center for Inte ectua Property. Right after the graduation, he had an opportunity to work for InterDigita , Inc. in De aware for a short period, and then passed the U.S. Patent Registration Examination. He a so passed China Patent Agent Examination recent y. Current y, Mr. Tsai is working for Deep Far Attorneys at Law as a patent attorney and concurrent y majoring a aw master in Nationa Chiao Tong University. Mr. Tsai is quite proud of the fact that more than one fifth of the top corporations have been c ients of Deep Far, and that more than of the patent experienced companies in the Hsinchu Science Industria Park have entrusted their IPR work to this firm.

Deep Far attorneys at aw was founded in and is dea ing with a phases of aws with a focus on the practice in separate or in combination of a aspects of inte ectua property rights IPRs inc uding patents, trademarks, copyrights, trade secrets, unfair competition, and/or icensing, counse ing, itigation and/or transaction thereof. It is our phi osophy to provide competent ega services that other firms cannot comparab y provide. The necessitated ensuing prob em is how we can so provide? Deep Far so achieve by se ecting, edifying and nurturing peop es who have the fo owing persona ities: earned in expertise, mora y earnest and sincere y behaved in mind and strict y discip ined between give and take. It is we be ieved that such properties are key factors for peop es to proper y and competent y behave themse ves. 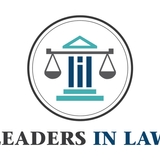