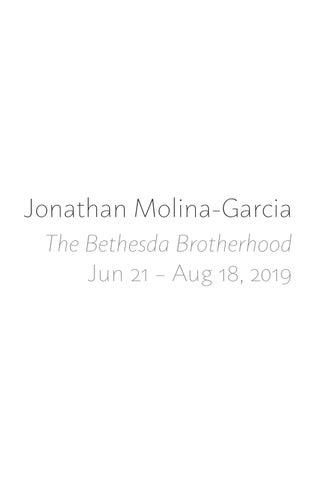 The Bethesda Brotherhood shadows selfidentified, HIV-positive men over 50 years of age, whom the artist met on a gay cruising website. Taking their shared HIV status as a starting point, the project includes photographic prints, performances for the camera, and book media that emerge out of the intergenerational exchange of knowledge and understanding at the crux of their interactions. Public Program Pay to Play ad the Dirty Politics of HIV Medication and US Pharmaceuticals with Jonathan Molina Garcia Saturday, July 20, 2019 1 - 3 PM

Dipping in the Water an essay by Matthew Lax Los Angeles, CA June 2019

It’s funny because there we were on the cusp of probably the biggest breakthrough in HIV health and science since the cocktail, and I was on the other side of it, somewhat displaced generationally. Even my first foray into HIV meds were a little behind-the-times. I received the trail end of a medication called Atripla that gave people intense dreams and psychotic episodes. I have the sense now (having transitioned into our current regimen of extremely sophisticated drugs) that my seroconversion happened at another major transitional point in the timeline of HIV care, maintenance, and its public/social life.... In the New Testament, Jesus Christ helps a paralyzed man bathe, thereby curing him. Only archaeological speculation and the gospel confirm the exact whereabouts of this Pool of Bethesda, marked by its proximity to Sheep Gate in the Muslim quarter of Jerusalem, an already contested site unto itself. The interchangeable Hebrew and Aramaic translations of Bethesda simultaneously offer two judgements: one of sanctification or grace, for its transcendent power; the other of defilement or shame, because of the infirmed who regularly gathered there. Bethesda recalls that other elusive and arguably queer body of water, the Fountain of Youth. St. Augustine, the Isle of Bimi, these are just geographical approximations for something of a cross-cultural obsession, the desire to transcend the normative soma. The colloqialism, “there are dog years, there are straight years, and then there are gay years, which could really go either way,” only hints at a consuming, erotic and painful love of youth. Yet, even with scientific advancements in gender hormones or HIV treatments, it has become increasingly hard to generalize how these bodies look, or how these bodies age. From colonizer to ailing pilgrim, the mystical well evades capture, and only the craving for immortality, for preservation, remains. Perhaps its cursed suitors are quenched neither by Bethesda’s physical matter nor the promise of a cure itself, but by the antidote of time regained, the value of myth. Like Bethesda, the codification of “status” has a double-meaning, as Jonathan MolinaGarcia’s own hyphenated identity links him to both the U.S. Citizenship and Immigration Services agency, as well as the Health Department. This body is regulated by the State, whether by force or treatment, “papers” or prescription. It could be said that the chosen family is born of rejection. Rejected first by family, for coming out. Rejected second by community for essentially coming out again, the cruel irony of revealing one’s status. The chosen family has nothing to do with blood or even geographic location, it is almost formed out from prior experiences and other relationships, an innate understanding of one another, sometimes fueled by a more obvious need or absence elsewhere.

“Positive” is one of a few semantic instances where the affirming word might have an opposing connotation. Perhaps this is the logic behind the contemporary clipping to poz - an attempt to normalize beyond stigma, but I can’t stop thinking about the rules of multiplication: a positive and a positive equal a positive; a negative and a negative equal a positive; a positive and a negative equal a negative. None of this is scientifically applicable, but neither pain nor passion is rational either. The AIDS crisis and subsequent years have largely been viewed and understood from the perspectives of white gay men. The face of AIDS is a Caucasian boy with Kaposi lesions, “a good guy from a good family;” these images amass the language of terror and racialized homophobia, reducing people of color to data points on a graph. Post-cocktail, Bethesda wonders not what the sick body would look like (resignation), but what the sick body is capable of (aspiration). The exchange of fluids leads to an exchange of knowledge. Undetectable, another form of passing, equally both negative and positive, forms a duplicitous, experimental identity. Yet, valuing the spry over the sick can only tease time. Through medicine, time is bought, time is had, but pathology is not pathos; only the Faustian image lasts forever. Unlike the Dorian Grays who cannot fathom growing old, and lack the psychological depth to see anything beyond the present, Molina-Garcia seeks out the generation removed, in the hopes of learning not only from their experiences, but alongside. Here, he mimics the most parasitic aspects of the photographic, reflecting something innate to each of his partners, absorbing it and distilling a hybrid form. By blurring the roles of lover, brother, and friend, homosociality surpasses traditional partnership, monogamy and learning, allowing exchange to flow in both directions, beyond defined or linear currents. The term ‘scrapbook’ implies expendability as much as accumulation of the scraps, the remains. Like our brothers and sisters still in hiding, Molina-Garcia’s Fire Island cross-stitch also attempts to pass, its darker content camouflaged by the sexism of innocuous craft. It is “women’s work,” the decorative pastime of ladies-in-waiting or the hobby of an effeminate boy. This isn’t just a kitsch object, it is another instance of transference, or transmission, a skill not only passed down, but applied. Photographs, more often than not, conceal more than show, and the violent act of cutting and re-composing only further obfuscates the depicted. The grey wash of images, algae-like, break away from the sterility of medicinal typologies or the judgements of memento mori. The needlepoint, the seroconvert of the collage which already doubts the singular image, fuses Allan to Jonathan, collapsing oral history through

the hand of the recipient. “Undetectability” is another form of such concealment. Jonathan does not just position himself or the viewer within this narrative; he begins the serious work of stitching together an index of a community, linking one present to another. He could be one of the nameless Latino boys who enter and exit that vacation house bedroom as if on a revolving stage. And, like extras in a crowd, not one of their names are recalled. “They traveled in different worlds,” Allan feebly says, before justifying this lapse in memory with, “everyone’s dead anyway.” Everyone’s dead. Allan, Gerry, and Sam belonged to the America where they could flirt with acceptance provided they keep their mouths in check. This double-life between “respectability” and the bathhouse, romanticized in gay literature like Dancer from the Dance, chronicles the white protagonists’ eternal quest for love both profound and carnal. However, the boys and men of color who populate the dancefloors of Holleran’s Manhattan and Fire Island escapades are only sideline attractions, novelties at the mercy of their one-night stand. White men with access, white men who, although second-class citizens themselves, were still citizens. As Douglas Crimp writes, it was only a crisis when the white men were dying in droves, unlike those already dead, those “the class-based and racist health care system failed to notice.”1 The other’d America. Everyone’s dead, except those who got lucky, the remainders. Nick Allan Gerry Sam Jonathan When Ponce de León first began his voyage, it was faulty magnets and chance, the Rota Fortunae, which led him to other people’s shores and homes. Like the conquistadors fumbling about in the middle of the ocean, the valorized victims of mainstream HIV/AIDS narratives often cite luck as the only explanation for their own survival. Survival is not easily rationalized, let alone quantified, but money often affords experimentation and myth should always be questioned. As decades of treatments show, medicine is not a perfect art either. In the end, it is kinship which sustains. Science can only buy us time; our elders have taught us so much more. 1 Crimp, Douglas. “How to Have Promiscuity in an Epidemic.” October, Vol. 43, 1987, p. 237., doi:10.2307/3397576.

Jonathan Molina-Garcia is a SalvadoranAmerican, photo-based media artist residing in Dallas, TX. His projects are committed to experiments in sharing. A citizen of the third world and an American DREAMER, his work looks at various topical and social themes in national and sexual identity. Primarily a collage artist, his mediums of interest also include time-based actions – performance art and video documentation; book-making and labor crafts. He holds an MFA degree in Photography from the California Institute of the Arts (CalArts), and graduated with dual degrees in Photography and Art History from the University of North Texas. Recent exhibitions include In Sickness at Texas Woman’s University and Transmission Reentry at The University of Texas at Dallas. He is the recipient of the 2018 Nasher Microgrant and has been awarded various other developmental grants from organizations including the artistrun Art Tooth gallery, the Jack Kent Cooke Foundation, and The Dallas Museum of Art. Starting Fall 2019, he will be an Assistant Professor in Photography and Digital futures at Virginia Commonwealth University.

Mission Lawndale is a multidisciplinary contemporary art center that engages Houston communities with exhibitions and programs that explore the aesthetic, critical, and social issues of our time. About Lawndale believes in the role of art and artists to inspire and inform the world around us. By serving as an intimate gathering place to experience art and ideas, Lawndale seeks to foster connections between communities in Houston and beyond. Lawndale presents a diverse range of artistic practices and perspectives through exhibitions and programs, including lectures, symposia, film screenings, readings, and musical performances. Through exhibition opportunities, the Artist Studio Program, institutional collaborations, and the engagement of an advisory board comprised of artists, curators, and scholars, Lawndale seeks within its mission to support all artistic and cultural communities of Houston. Support Lawndaleâ&amp;#x20AC;&amp;#x2122;s exhibitions and programs are produced with generous support from The Brown Foundation, Inc.; David R. Graham/Felvis Foundation; the John R. Eckel, Jr. Foundation; Houston Endowment; Kathrine G. McGovern/The John P. McGovern Foundation; The National Endowment for the Arts; the Texas Commission on the Arts; The City of Houston; and The Wortham Foundation, Inc.

The project shadows self-identified, HIV-positive men over 50 years of age, whom the artist met on a gay cruising website. Taking their shared HIV status as a starting point, the project includes photographic prints, performances for the camera, and book media that emerge out of the intergenerational exchange of knowledge and understanding at the crux of their interactions. 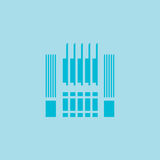