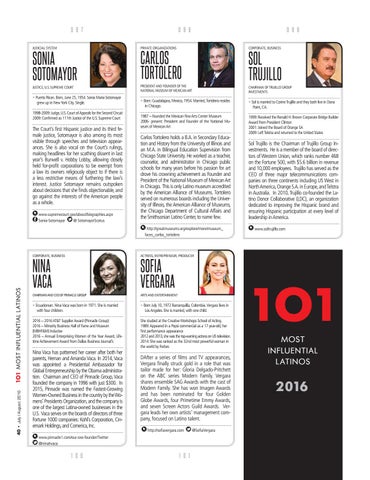 PRESIDENT AND FOUNDER OF THE NATIONAL MUSEUM OF MEXICAN ART

• Sol is married to Corine Trujillo and they both live in Dana Point, CA.

1999: Received the Ronald H. Brown Corporate Bridge Builder Award from President Clinton 2001: Joined the Board of Orange SA 2009: Left Telstra and returned to the United States

The Court’s first Hispanic justice and its third female justice, Sotomayor is also among its most visible through speeches and television appearances. She is also vocal on the Court’s rulings, making headlines for her scathing dissent in last year’s Burwell v. Hobby Lobby, allowing closely held for-profit corporations to be exempt from a law its owners religiously object to if there is a less restrictive means of furthering the law’s interest. Justice Sotomayor remains outspoken about decisions that she finds objectionable, and go against the interests of the American people as a whole. www.supremecourt.gov/about/biographies.aspx Sonia-Sotomayor @ SotomayorScotus

Carlos Tortolero holds a B.A. in Secondary Education and History from the University of Illinois and an M.A. in Bilingual Education Supervision from Chicago State University. He worked as a teacher, counselor, and administrator in Chicago public schools for many years before his passion for art drove his crowning achievement as Founder and President of the National Museum of Mexican Art in Chicago. This is only Latino museum accredited by the American Alliance of Museums. Tortolero served on numerous boards including the University of Illinois, the American Alliance of Museums, the Chicago Department of Cultural Affairs and the Smithsonian Latino Center, to name few.

CHAIRMAN AND CEO OF PINNACLE GROUP

• Ecuadorean. Nina Vaca was born in 1971. She is married with four children.

• Born July 10, 1972 Barranquilla, Colombia. Vergara lives in Los Angeles. She is married, with one child.

She studied at the Creative Workshops School of Acting. 1989: Appeared in a Pepsi commercial as a 17 year-old, her first performance appearance 2012 and 2013, she was the top-earning actress on US television. 2014: She was ranked as the 32nd most powerful woman in the world by Forbes

Sol Trujillo is the Chairman of Trujillo Group Investments. He is a member of the board of directors of Western Union, which ranks number 468 on the Fortune 500, with $5.6 billion in revenue and 10,000 employees. Trujillo has served as the CEO of three major telecommunications companies on three continents including US West in North America, Orange S.A. in Europe, and Telstra in Australia. In 2010, Trujillo co-founded the Latino Donor Collaborative (LDC), an organization dedicated to improving the Hispanic brand and ensuring Hispanic participation at every level of leadership in America. www.soltrujillo.com

Nina Vaca has patterned her career after both her parents, Hernan and Amanda Vaca. In 2014, Vaca was appointed a Presidential Ambassador for Global Entrepreneurship by the Obama administration. Chairman and CEO of Pinnacle Group, Vaca founded the company in 1996 with just $300. In 2015, Pinnacle was named the Fastest-Growing Women-Owned Business in the country by the Womens’ Presidents Organization, and the company is one of the largest Latina-owned businesses in the U.S. Vaca serves on the boards of directors of three Fortune 1000 companies: Kohl’s Corporation, Cinemark Holdings, and Comerica, Inc.

DAfter a series of films and TV appearances, Vergara finally struck gold in a role that was tailor made for her: Gloria Delgado-Pritchett on the ABC series Modern Family. Vergara shares ensemble SAG Awards with the cast of Modern Family. She has won Imagen Awards and has been nominated for four Golden Globe Awards, four Primetime Emmy Awards, and seven Screen Actors Guild Awards. Vergara leads her own artists’ management company, focused on Latino talent. http://sofiavergara.com 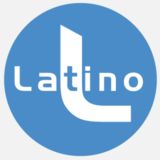