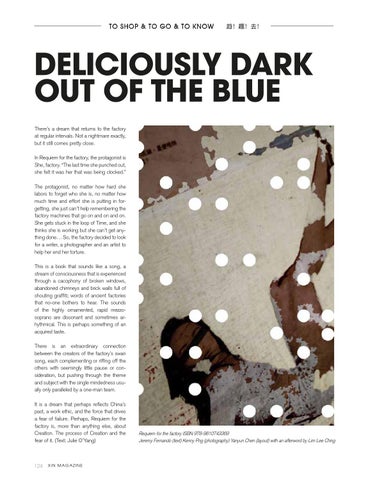 DeliCiouslY Dark out of the Blue There’s a dream that returns to the factory at regular intervals. Not a nightmare exactly, but it still comes pretty close. In Requiem for the factory, the protagonist is She, factory. “The last time she punched out, she felt it was her that was being clocked.” The protagonist, no matter how hard she labors to forget who she is, no matter how much time and effort she is putting in forgetting, she just can’t help remembering the factory machines that go on and on and on. She gets stuck in the loop of Time, and she thinks she is working but she can’t get anything done… So, the factory decided to look for a writer, a photographer and an artist to help her end her torture. This is a book that sounds like a song, a stream of consciousness that is experienced through a cacophony of broken windows, abandoned chimneys and brick walls full of shouting graffiti; words of ancient factories that no-one bothers to hear. The sounds of the highly ornamented, rapid mezzosoprano are dissonant and sometimes arhythmical. This is perhaps something of an acquired taste. There is an extraordinary connection between the creators of the factory’s swan song, each complementing or riffing off the others with seemingly little pause or consideration, but pushing through the theme and subject with the single mindedness usually only paralleled by a one-man team. It is a dream that perhaps reflects China’s past, a work ethic, and the force that drives a fear of failure. Perhaps, Requiem for the factory is, more than anything else, about Creation. The process of Creation and the fear of it. (Text: Julie O’Yang) 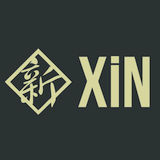 All topics that are relevant for a luxury lifestyle magazine are represented, from classic watches and jewelry to expensive cars and gadgets...

All topics that are relevant for a luxury lifestyle magazine are represented, from classic watches and jewelry to expensive cars and gadgets...