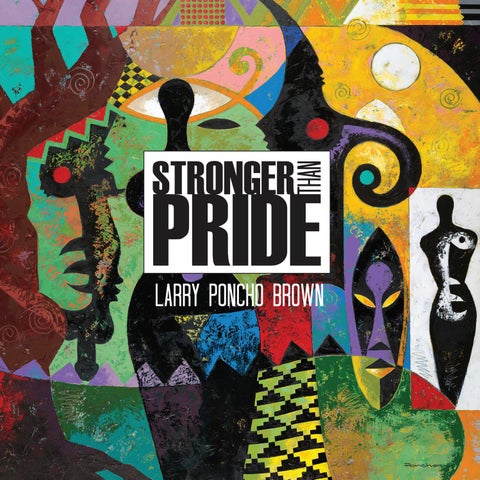 s the Executive Director and Chief Curator of Art for the Soul Gallery for over 25 years, I have been bringing renowned artists such as Larry Poncho Brown to Western MA and continue to do so. My continued work with artists of all abilities earned a Massachusetts House of Representatives citation for “exemplary dedication and outstanding contributions to community service and diligent efforts to promote multicultural understandings and inclusion through the arts”. Art for the Soul Gallery is proud to collaborate with Larry Poncho Brown as Poncho is one of the few artists who continue to form collaborations between gallery and artist. With the economic decline of the past decade, artists have moved away from exhibiting in galleries. Non-profit and small galleries data are grim, leading to an economic collapse of community base galleries, which are impediments to sustainability of these organizations. The current economic uncertainty has made buying and selling art more challenging.

Poncho’s participation and involvement with Art for the Soul Gallery is the essential part of its success. Poncho’s continued participation has promoted economic growth and increased attention by attracting new visitors. Poncho’s Stronger Than Pride exhibition, truly depicts the pride and values of African Americans in a society that continues to attempt to discredit its values and morals. Poncho has long engaged to help devise, and carry out, creative community building. His continued support and building upon the current asset of the gallery is vital to community building and an important element of economic development for the arts. Thank you Larry Poncho Brown and continued success. — Rosemary Tracy Woods Executive Director Art for the Soul Gallery

he American black male has endured and overcome the most horrific forms of image degradation of any race. How does he find his way back to his dignity, when he arrived to a foreign land, and an entire society declared him inhuman? Yet, the black family persevered despite a continuous psychological and physiological bombardment. This kind of negative conditioning had a reverse effect on the black man, giving him the motivation to endure and fight, even when the odds were stacked against him. From the beginning, the depiction of the African male throughout American history has been predominantly laden with mistruths and distortions made with calculation, to keep people of color in mental and spiritual bondage. These perilous times and struggles forced the black male to rely on something much stronger than pride. We continue to fight with minimal progress, yearn to be treated equally, and to have reasonable representation of what the constitution intended, while society continued to exclude us. As a child, in the era of the 60’s, I clearly remember witnessing the powerful images over the television airwaves in the 70’s. There began a celebration of our music, style, attitudes, and flow, and a beginning of society’s exploitation of the same. Watching television shows, i.e., Soul Train, The Jefferson’s, Good Times, The Cosby Show, and A Different World, was the beginning of the portrayal of the African American in a positive light. The movie industry began to take stock of whether African Americans would support productions that contained powerful and positive black subjects. The evolution of the black character was apparent from the Blacksploitation era of the early 70’s

to modern Hollywood in the 21st-century. Even though we were inundated with black imagery and themes, it was disheartening that it was limited to scenes that only depicted poverty, drug addicts, criminals, gangsters, pimps or prostitutes, It took even longer to witness an African American hero in a lead role. Progress is progress, momentum is momentum, and history is being rewritten every day. The popular artists of the 80’s and 90’s began a movement to create positive representations of the many aspects of African American life. Black art evolved from slavery scenes, to southern scenes, and finally, to almost every real aspect of our lives by the end of the 20th century. 21st century art, however, suddenly began to address shameless violence and police brutality being visited on people of color. At times, it appears that maybe we haven’t made much progress, and our art has been carefully documenting that progression. It is my hope that people of all walks of life pay attention. We still don’t have enough African-American themed television shows or movies, and some of our music has been undergoing challenges to retain positive imagery. Art remains one of the few places where one can experience the beauty, see the sophistication of our lives and spiritual convictions. This exhibition is comprised of images that are an example of my contributions to the modern day African-American image. It is my sincere hope, that everyone enjoy the work, witness the pride and spirit, and celebrate the love. There is still much more work to be done. — Larry Poncho Brown

oar! With the spirit of a tiger, Larry Poncho Brown is “Stronger Than Pride”. He is living legacy steeped in a consistent commitment to the connections and intersections personally built between his exemplary artistry, mentorship of the talented, and projects that highlight the often forgotten yet very worthy unsung. Brown walks the walk, talks the talk, and lives the life of a creative. Most often called by his artist moniker, “Poncho” remembers loving to draw early on and has stood firmly entrenched in the art world for over thirty years becoming a world leader in contemporary art. The premise of pride is woven throughout his artistry; however, the strength of the work is evolutionary and transcends beyond its visual beauty.

“My creations are a reflection of my personal values and pay homage to ongoing themes of unity, family, and spirituality.” –Larry Poncho Brown

With a mighty force, Poncho never shuns an opportunity to vigorously capture the moment. From regal legacy, historical connections, or political moments to social issues including fatherlessness, endangered youth, family hardship, or homelessness; his message is propagated through his art. Whether

celebrating diversity, encouraging unification, or recognizing perseverance, the work of Larry Poncho Brown relentlessly addresses beauty in every subject. Admirers often site rhythm, movement, and unity, as favorite elements in his work. He primarily works in acrylic, although he uses a variety of mediums and styles. One of Larry Poncho Brown’s crowning achievements as an artist has been his dedication to mentorship as a way of bringing balance to African-American communities. “Each One Teach One” is an American proverb born of African traditions. The phrase originated in the United States during slavery, when Africans were denied education. The pipeline to a profession as an artist eludes many talented creatives, and Poncho does his part to fill the void. “Artist mentorship is one of my top priorities...I believe we have a responsibility to share our talents and give back”, says Mr. Brown. Again, he roars with a strength even larger than the positive essence that his work exudes. His mentorship roster is impressive and spans three decades. Many have gone on to become top ranking professional artists. It stands without question that the artistry skillfully implemented by Larry Poncho Brown is sought after. But, increasingly, his consistent commitment to the work reaches dynamically beyond talent,

execution, and mentorship. He is an artist curator who holds within his legacy a tradition of producing themed exhibitions that uplift unsung professional African American contemporary artists. Some of Mr. Brown’s more recent projects include the following: Con10poraries (2012) was a group exhibition curated by Brown. Over a ten-year span, ten of the most influential African-American contemporary artists were invited to Morgan State University in Baltimore, Maryland. The exhibition took place on campus, in the James E. Lewis Museum of Art. Baltimore’s Unsung (2014), his show that invited the participation of well-known, acclaimed, and obscure creatives from the Baltimore visual art scene to “hang your best work” featuring over 40 artisans. Baltimore “MASTERS” Art of the Ancestors (2016), presented as a salute to historical Baltimore African-American visual artists who have transitioned from life to join the ancestors circle. Many of these artists acquired national and international acclaim, yet were uncelebrated in their hometown. B’more Artscene (2016) was an exhibition of contemporary performance art staged on the steps of the Baltimore Museum of Art as an activist statement to highlight the lack of racial equity and inclusion within major art institutions. Nearly 100 African American practicing artists participated. Each exhibition has presented fine contemporary art at its best, granting aesthetic beauty with pride, and evoking rigorous dialogue with strength.

Through it all, Larry Poncho Brown impacts the world as he is continuously compelled to pick up the pencil with only one criteria… work merely from the imagination. That clear personal motivation is a driving force that continues to hold true, and it can be seen displayed on canvas. His great works “The Complexity of Change”, “The Culture Keepers”, “Transcendence”, “The Power Within”, “The Spirit of Fatherhood”, “A Legacy of Love and Learning”, “Black Butterfly”, and “Indigo Magic” are just a few selected examples of the works shown in the Stronger than Pride exhibition. It is a solo show that pays homage to Mr. Brown as a living legacy. Through the visual, Larry Poncho Brown shares art life redefined. It is the Poncho perspective on canvas. This candid view of the “Art of Poncho” is unpredictably rich, while at the same time unexpectedly sensitive... Yet the work remains steadfastly strong, stronger, maybe even strongest. — Kibibi Ajanku, MFA Maryland Institute College of Art, Curatorial Coppin State University, Urban Arts

arry Poncho Brown is a native of Baltimore, MD. He started his first business at the age of 17 as a signwriter and has been a full time artist ever since. Poncho received his Bachelors of Fine Arts Degree from the Maryland Institute College of Art, in Baltimore, MD. His art, both fine and commercial, has been published nationally in Art Trends, U.S. Art Gallery, Images, Upscale, Ebony, Ebony Man, Essence, and Jet Magazines. His work is also featured in the UCLA Fowler Museum of Cultural History Textile Series book entitled “Wrapped in Pride”. His work adorns the walls of the likes of Bill Cosby, Dick Gregory, Anita Baker, Susan Taylor, Bernard Bronner, Ed Gordon and Charles Bibbs just to name a few. In pursuing his philanthropic goals, he founded “Raising The Arts” which provides fundraising opportunities for non-profit organizations. He has created over 70 images for such organizations over

the past three decades. Poncho was awarded “Artist of the Year” by the African American Visual Arts Association in 2000, the “Heritage Arts Festival Palette Award” in 2003, and the “Save the Arts Award” as Museum’s Choice in 2010, and “The Jan Spivey Gilchrist Visual Arts Award” in 2013. Poncho’s unique style combines past and present art forms to create a sense of realism, mysticism, and beauty, giving his art images universal appeal. His contemporary creations are a reflection of his personal values and pay homage to ongoing themes of family, unity, spirituality and perseverance. “The African American art realm has been pressing onward because of the positive images that have become a narrative of our perseverance. My works attempt to capture SOUL while purposely depicting positive representations of African American culture. Art and imagery are the strongest forms to challenge the perceptions of African Americans in our society.” — Larry Poncho Brown 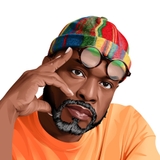 The Art of Poncho