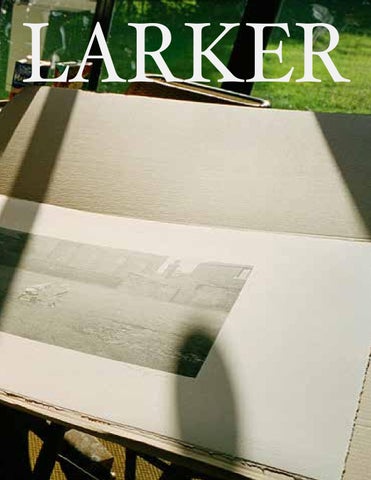 LARKER ANTHOLOGY Issue 7: REAL LUCID Edited by Patrícia Silva www.larkeranthology.com Published by Shambalissima Editions New York, NY, September 2019 Cover: A black and white photograph by Humphrey Spender, taken at Spender’s home in 1999. Cover: Famous Bi Tumblr background This page: Photograph from of The Mill House at Tidmarsh, where between 1918-1924 Lytton Strachey and Dora Carrington lived, along with other conscientious objectors to the war. Courtesy of Reading Borough Libraries, UK.

from an interview with Tanwarin Sukkhapisit for ThaiPBS World, April 5, 2019

“ Six million Thai “ people voted for our party because they want to see our country change to be better than the past.” —Tanwarin Sukkhapisit Thailand’s first transgender Member of Parliament

“My main concept is you don’t have to be so conceptual. I’m minimal and straightforward. When I explain it to people, I compare a WilliamAdolphe Bouguereau painting with a Brancusi sculpture. I’m the Brancusi sculpture, just a slab of metal on a hunk of wood, but it’s about the right piece of metal and the perfect gesture.” —Rick Owens in conversation with Lee Carter

“I think I have something to say, but it’s difficult to hear myself over the anxiety of being black.”

“Being bisexual means being capable of falling in love with anyone. That, to me, is beautiful. It also makes you part of an incredible and wonderful bisexual community, which I hold so dear.” —Vaneet Mehta

Though I am opey bi, I find it tough to date or make a connection with straight women. Doesn’t help that most people first assume that I’m gay because I for a lack of a better phrase don’t “pass for straight” — @PrinceAriesJay

#bisexualmenspeak Being bi and a performer means never being entirely sure if you’ll get booed off stage when you mention you’re bi. It’s better now but I wouldn’t have dared to do my act in a gay pub in the 90s. — @MischiefMental

“I didn’t know that I was bisexual until I was almost 39 years old. I’d been enduring, I had come to find, a living death. It was only at the point of despair that I was able to acknowledge to myself who I am—the contour of my soul. Now, life has color and a lot of blood, sweat and tears as I come closer to loving myself.” —Karl-Erik

I wasn’t drinking this Pride, but let me tell you that I was drunk on the love we received. Everywhere you looked, a sea of LGBTQ family and allies were dancing, shouting, waving flags, smiling and laughing. It was fucking electric. I could not stop smiling. In the crowd, the bi community came to represent, wearing the colors, waving our flags. We would scream in recognition when we saw each other, pointing and waving. “I see you,” I kept yelling while jumping up and down. —Stephanie Beatriz, GQ, 2018

Alex the therapist from Bluestockings? 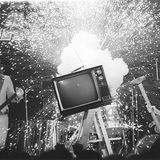