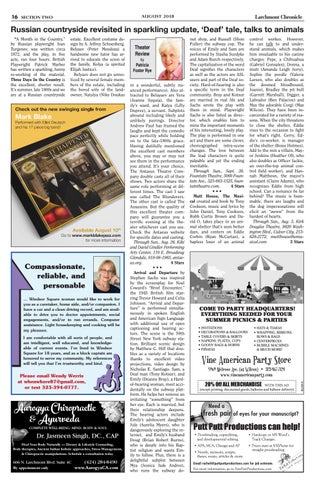 Russian countryside revisited in sparkling update, ‘Deaf’ tale, talks to animals estate. Excellent costume design by A. Jeffrey Schoenberg. Belyaev (Peter Mendoza) a handsome new tutor has arrived to educate the scion of the family, Kolya (a spirited Elijah Justice). Belyaev does not go unnoticed by several female members of the estate, including the bored wife of the landowner, Natalya (Nike Doukas

Compassionate, reliable, and personable … Windsor Square woman would like to work for you as a caretaker, home aide, and/or companion. I have a car and a clean driving record, and am available to drive you to doctor appointments, social engagements, and/or to run errands. Computer assistance. Light housekeeping and cooking will be my pleasure. I am comfortable with all sorts of people, and am intelligent, well educated, and knowledgeable of current events. I’ve lived in Windsor Square for 18 years, and as a block captain am honored to serve my community. My references will tell you that I’m trustworthy and kind.

Patricia Foster Rye in a wonderful, subtly nuanced performance). Also attracted to Belayaev are Vera (Jeanne Syquia), the family’s ward, and Katya (Lilly Dupree), a servant. Subplots abound including likely and unlikely pairings. Director Andrew Paul has framed the laughs and kept the comedic pace perfectly while holding on to the late-1800s grace. Having dutifully mentioned the excellent cast members above, you may or may not see them in the performance you attend. It’s your choice. The Antaeus Theatre Company double casts all of their shows. Two actors share the same role performing at different times. The cast I saw was called The Blunderers. The other cast is called The Assassins. But the quality of this excellent theater company will guarantee you a terrific evening at the theater whichever cast you see. Check the Antaeus website for specific dates and casting. Through Sun., Aug. 26, Kiki and David Gindler Performing Arts Center, 110 E. Broadway Glendale, 818-06-1983, antaeus.org. 4 Stars • • • Arrival and Departure by Stephen Sachs was inspired by the screenplay for Noel Coward’s “Brief Encounter,” the 1945 British film starring Trevor Howard and Celia Johnson. “Arrival and Departure” is performed simultaneously in spoken English and American Sign Language with additional use of open captioning and hearing actors. The scene is the 59th Street New York subway station. Brilliant scenic design by Matthew G. Hill that doubles as a variety of locations thanks to excellent video projections, video design by Nicholas E. Santiago. Sam, a Deaf man (Tony Kotsur), and Emily (Deanne Bray), a Hardof-hearing woman, meet accidentally on the subway platform. He helps her remove an irritating “something” from her eye. Each is married, but their relationship deepens. The hearing actors include Emily’s adolescent daughter Jule (Aurelia Myers), who is dangerously exploring the internet, and Emily’s husband Doug (Brian Robert Burns), who is deeply into his Baptist religion and wants Emily to follow. Plus, there is a delightful subplot between Mya (Jessica Jade Andres), who runs the subway do-

nut shop, and Russell (Shon Fuller) the subway cop. The voices of Emily and Sam are performed by Stasha Surdyke and Adam Burch respectively. The capitalization of the word Deaf signifies the characters as well as the actors are ASL users and part of the Deaf society. Hard-of-hearing is also a specific term in the Deaf community. Bray and Kotsur are married in real life and Sachs wrote the play with them in mind. Playwright Sachs is also listed as director, which enables him to mine the important moments of his interesting, lovely play. The play is performed in one act and there are some clever, choreographed intra-scene changes. The love between the lead characters is quite palpable and yet the ending inevitable. Through Sun., Sept. 30. Fountain Theatre, 5060 Fountain Ave., 323-663-1525, fountaintheatre.com. 4 Stars • • • Mutt House, The Musical created and book by Tony Cookson, music and lyrics by John Daniel, Tony Cookson, Robb Curtis Brown and David O, takes place in an animal shelter that’s seen better days, and centers on Eddie Corbin (Ryan McCartan), a hapless loser of an animal

control worker. However, he can talk to and understand animals, which makes him invaluable to his canine charges: Pepe, a Chihuahua (Gabriel Gonzalez), Donna, a mutt (Amanda Leigh Jerry), Sophie the poodle (Valerie Larsen, who also doubles as the doomed bloodhound, Joanie), Bradley the pit bull (Garrett Marshall), Digger, a Labrador (Ben Palacios) and Max the adorable Corgi (Max Wilcox). They have been incarcerated for a variety of reasons. When the city threatens to close the shelter, Eddie rises to the occasion to fight for what’s right. Gerry, Eddie’s co-worker, is manager of the shelter (Boise Holmes). Add to the mix a villain, Mayor Jenkins (Heather Olt, who also doubles as Officer Jackie, an over-the-top animal control field worker), and Hannah Matthews, the mayor’s assistant (Claire Adams), who recognizes Eddie from high school. Can a romance be far behind? The music is hummable, there are laughs and the dog impersonations will elicit an “awww” from the hardest of hearts. Through Sun., Aug. 5, Kirk Douglas Theatre, 9820 Washington Blvd., Culver City, 213628-2772, mutthousethemusical.com 3 Stars

20% Off ALL MERCHANDISE WITH THIS AD (except printing, discounted goods, balloons and balloon delivery)

“A Month in the Country,” by Russian playwright Ivan Turgenev, was written circa 1872, and the play, in five acts, ran four hours. British Playwright Patrick Marber has written a sparkling, funny re-working of the material. Three Days In the Country is the excellent, shorter result. It’s summer, late 1800s and we are at a Russian countryside

fresh pair of eyes for your manuscript?

For more information, go to PuttPuttProductions.com 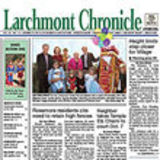