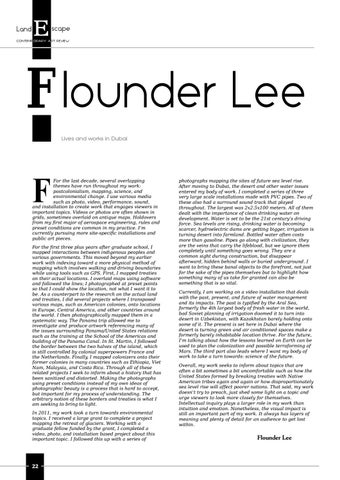 For the last decade, several overlapping themes have run throughout my work: postcolonialism, mapping, science, and environmental change. I use various media such as photo, video, performance, sound, and installation to create work that engages viewers in important topics. Videos or photos are often shown in grids, sometimes overlaid on antique maps. Holdovers from my first major of aerospace engineering, rules and preset conditions are common in my practice. I’m currently pursuing more site-specific installations and public art pieces. For the first three plus years after graduate school, I mapped interactions between indigenous peoples and various governments. This moved beyond my earlier work with indexing toward a more physical method of mapping which involves walking and driving boundaries while using tools such as GPS. First, I mapped treaties on their actual locations. I overlaid maps using software and followed the lines; I photographed at preset points so that I could show the location, not what I want it to be. As a counterpart to the research on the actual land and treaties, I did several projects where I transposed various maps, such as American colonies, onto locations in Europe, Central America, and other countries around the world. I then photographically mapped them in a systematic way. The Panama trip allowed me to investigate and produce artwork referencing many of the issues surrounding Panama/United States relations such as the training at the School of the Americas and building of the Panama Canal. In St. Martin, I followed the border between the two halves of the island, which is still controlled by colonial superpowers France and the Netherlands. Finally, I mapped colonizers onto their former colonies in many countries such as Ethiopia, Viet Nam, Malaysia, and Costa Rica. Through all of these related projects I seek to inform about a history that has been sanitized and distorted. Making the photographs using preset conditions instead of my own ideas of photographic beauty is a process that is hard to accept, but important for my process of understanding. The arbitrary notion of these borders and treaties is what I am seeking to bring to light. In 2011, my work took a turn towards environmental topics. I received a large grant to complete a project mapping the retreat of glaciers. Working with a graduate fellow funded by the grant, I completed a video, photo, and installation based project about this important topic. I followed this up with a series of

photographs mapping the sites of future sea level rise. After moving to Dubai, the desert and other water issues entered my body of work. I completed a series of three very large scale installations made with PVC pipes. Two of these also had a surround sound track that played throughout. The largest was 2x2.5x100 meters. All of them dealt with the importance of clean drinking water on development. Water is set to be the 21st century’s driving force. Sea levels are rising, drinking water is becoming scarcer, hydroelectric dams are getting bigger, irrigation is turning desert into farmland. Bottled water often costs more than gasoline. Pipes go along with civilization, they are the veins that carry the lifeblood, but we ignore them completely until something goes wrong. They are a common sight during construction, but disappear afterward, hidden behind walls or buried underground. I want to bring these banal objects to the forefront, not just for the sake of the pipes themselves but to highlight how something many of us take for granted can also be something that is so vital. Currently, I am working on a video installation that deals with the past, present, and future of water management and its impacts. The past is typified by the Aral Sea, formerly the 4th largest body of fresh water in the world, bad Soviet planning of irrigation doomed it to turn into desert in Uzbekistan, with Kazakhstan barely holding onto some of it. The present is set here in Dubai where the desert is turning green and air conditioned spaces make a formerly barely inhabitable location thrive. For the future, I’m talking about how the lessons learned on Earth can be used to plan the colonization and possible terraforming of Mars. The third part also leads where I want my body of work to take a turn towards: science of the future. Overall, my work seeks to inform about topics that are often a bit sometimes a bit uncomfortable such as how the United States formed by breaking treaties with Native American tribes again and again or how disproportionately sea level rise will affect poorer nations. That said, my work doesn’t try to preach, just shed some light on a topic and urge viewers to look more closely for themselves. Intellectual inquiry plays a larger role in my work than intuition and emotion. Nonetheless, the visual impact is still an important part of my work. It always has layers of meaning and plenty of detail for an audience to get lost within.