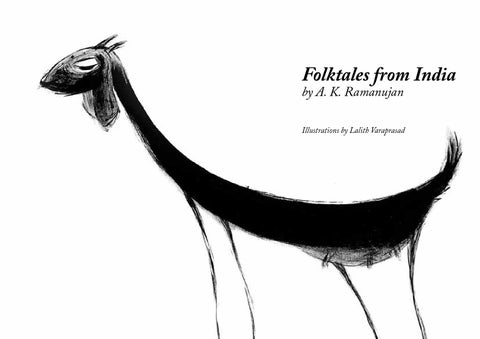 Folktales from India by A. K. Ramanujan

Buffalo into Rooster Patil was a poor man, but he had a wife who

loved him and they had two buffaloes to their name. As they grew older and poorer, the

woman said to her husband, ‘Why don’t you take one of our buffaloes and sell it in the market? We could do with some extra money.’

Next morning, when Patil was on his way to the market in the next village, he met a man who

was leading his horse to the same place. Patil told him that he was taking the old buffalo to

sell it. The stranger seemed to take a fancy to the

buffalo. He said, ‘Why do ou want to take it that far? Give it to me and I’ll give you my horse.’

Patil thought, ‘Why not? A horse is less trouble, and what’s more, fun for the children.’ So he said, ‘All right, give me the horse.’

When he tried to ride the horse to the market, he found that it was blind.

Soon he met a man with a cow.

‘Where are you going, old man, with that horse?’ ‘I was on my way to the market to sell my old

buffalo. But I exchanged it for this horse, and it’s blind.’ ‘Is that what happened? This cow of mine is a fine animal. Why don’t you take it and give me the horse? I can use a horse.’

Patil looked at the cow and liked the looks of it.

Moreover, a cow is less work than a horse. So he changed the cow for the horse, but it didn’t take him long to find out that the cow was lame in one leg.

He then met a man with a she-goat. When the man asked where he was going, Patil told him:

‘I wanted to sell my old buffalo in the market. On the way, I exchanged it for a blind horse.

Now I have this lame cow in place of the horse. I’ll have to sell it.’ ‘Oh, why do you want to sell it? I can use a cow. Take my she-goat and give me the cow,’ said the stranger.

When Patil started to walk the she-goat, he found it was quite sick.

Just as he reached the market, he met a man

with a rooster under his arm, and managed to exchange the goat for the rooster.

hand. He took it to the market and all he could get for it was a single rupee.

With it he bought some food, washed his hands and feet in a pond, and sat down under a pipal

tree with his food on a leaf. Just as he was about to put a morsel in his mouth, a beggarman

in tatters appeared from nowhere and said, I havenâ&amp;#x20AC;&amp;#x2122;t eaten for days. Give me some food.

Patil couldnâ&amp;#x20AC;&amp;#x2122;t bear to see the beggar starve while he ate his fill, so he gave him the whole leaf full of food and left for home.

His wife was waiting for him. She had cooked

‘Don’t be in such a hurry. I exchanged the goat

arrived. She asked him how the day went and

wake us up every morning. Where is it? Let’s all

and cleaned and fed the children by the time he why he looked so beaten. He said, ‘I’ll tell you

everything. Give me a glass of water first.’ After cooling himself off with a drink of water, he began to tell her what had happened.

Children, Daddy has brought a horse!’ ‘Wait. I

for a rooster,’ said the poor man. ‘That’s fine. It’ll go see it,’ said the eager wife. ‘Listen, I don’t have the rooster. I got hungry, so I sold the rooster for a rupee and bought soething to eat.’ ‘That’s all

right. What could we have done with a rooster? I’m grad you ate something for lunch. You

shouldn’t go hungry after all that work you did,’ said the good wife.

don’t have the horse. I exchanged it for a horse.’

‘Wait till I tell you everyting, please. I was about

can have some cow’s milk at last. Children, go

gave him all the food and walked home.’ ‘And

‘Oh, lovely! I always wanted a cow. The children look outside. Daddy has brought a cow,’ said the

wife. ‘Wait, wait, I wanted to bring the cow home, but I exchaged it for a she-goat.’ ‘A she-goat is

even better. Goat’s milk makes children strong. And a goat takes care of itself. Children, go see the new goat!’

to eat when a starving beggar appeared. So I

you went hungry? Poor man! But what you did

was right. You should never turn away a beggar at mealtime. Now, if you’ll wash up, I’ll get you something to eat. You must be famished,’ said the wife, and served him a proper meal.

Next morning, when Patil woke up and opened the door of his hut, he was amazed by what he

saw. He called his wife to come quickly. Right in front of their door stood a collection of animals: a buffalo that was not old, a horse that was not blind, a cow that was not lame, a she-goat that

was well and frisky, and a splendid rooster. Right next to them was a leaf, with a shining rupee on it. As they wondered at what they saw, the wife

whispered in awe, ‘ Who in the world could have done this? That beggar you fed yesterday?’ The man said, ‘Yes, That beggar!

He must have been God, who else?’

This story is from the book "Folktales from India" by A. K. Ramanujan. I illustrated these images with ink and brush. 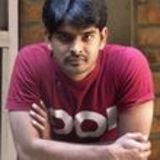