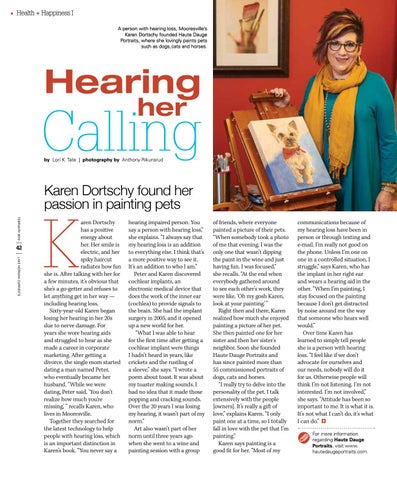 Health + Happiness I A person with hearing loss, Mooresville’s Karen Dortschy founded Haute Dauge Portraits, where she lovingly paints pets such as dogs, cats and horses.

aren Dortschy has a positive energy about her. Her smile is electric, and her spiky haircut radiates how fun she is. After talking with her for a few minutes, it’s obvious that she’s a go-getter and refuses to let anything get in her way — including hearing loss. Sixty-year-old Karen began losing her hearing in her 20s due to nerve damage. For years she wore hearing aids and struggled to hear as she made a career in corporate marketing. After getting a divorce, the single mom started dating a man named Peter, who eventually became her husband. “While we were dating, Peter said, ‘You don’t realize how much you’re missing,’ ” recalls Karen, who lives in Mooresville. Together they searched for the latest technology to help people with hearing loss, which is an important distinction in Karen’s book. “You never say a

hearing impaired person. You say a person with hearing loss,” she explains. “I always say that my hearing loss is an addition to everything else. I think that’s a more positive way to see it. It’s an addition to who I am.” Peter and Karen discovered cochlear implants, an electronic medical device that does the work of the inner ear (cochlea) to provide signals to the brain. She had the implant surgery in 2005, and it opened up a new world for her. “What I was able to hear for the first time after getting a cochlear implant were things I hadn’t heard in years, like crickets and the rustling of a sleeve,” she says. “I wrote a poem about toast. It was about my toaster making sounds. I had no idea that it made those popping and cracking sounds. Over the 20 years I was losing my hearing, it wasn’t part of my norm.” Art also wasn’t part of her norm until three years ago when she went to a wine and painting session with a group

of friends, where everyone painted a picture of their pets. “When somebody took a photo of me that evening, I was the only one that wasn’t dipping the paint in the wine and just having fun. I was focused,” she recalls. “At the end when everybody gathered around to see each other’s work, they were like, ‘Oh my gosh Karen, look at your painting.’ ” Right then and there, Karen realized how much she enjoyed painting a picture of her pet. She then painted one for her sister and then her sister’s neighbor. Soon she founded Haute Dauge Portraits and has since painted more than 55 commissioned portraits of dogs, cats and horses. “I really try to delve into the personality of the pet. I talk extensively with the people [owners]. It’s really a gift of love,” explains Karen. “I only paint one at a time, so I totally fall in love with the pet that I’m painting.” Karen says painting is a good fit for her. “Most of my

communications because of my hearing loss have been in person or through texting and e-mail. I’m really not good on the phone. Unless I’m one on one in a controlled situation, I struggle,” says Karen, who has the implant in her right ear and wears a hearing aid in the other. “When I’m painting, I stay focused on the painting because I don’t get distracted by noise around me the way that someone who hears well would.” Over time Karen has learned to simply tell people she is a person with hearing loss. “I feel like if we don’t advocate for ourselves and our needs, nobody will do it for us. Otherwise people will think I’m not listening. I’m not interested. I’m not involved,” she says. “Attitude has been so important to me. It is what it is. It’s not what I can’t do, it’s what I can do.” For more information regarding Haute Dauge Portraits, visit www. hautedaugeportraits.com.