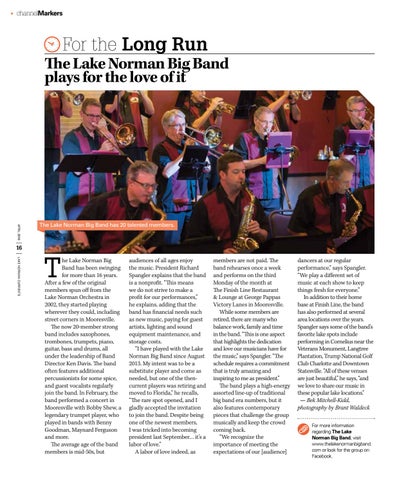 For the Long Run

The Lake Norman Big Band plays for the love of it

he Lake Norman Big Band has been swinging for more than 16 years. After a few of the original members spun off from the Lake Norman Orchestra in 2002, they started playing wherever they could, including street corners in Mooresville. The now 20-member strong band includes saxophones, trombones, trumpets, piano, guitar, bass and drums, all under the leadership of Band Director Ken Davis. The band often features additional percussionists for some spice, and guest vocalists regularly join the band. In February, the band performed a concert in Mooresville with Bobby Shew, a legendary trumpet player, who played in bands with Benny Goodman, Maynard Ferguson and more. The average age of the band members is mid-50s, but

audiences of all ages enjoy the music. President Richard Spangler explains that the band is a nonprofit. “This means we do not strive to make a profit for our performances,” he explains, adding that the band has financial needs such as new music, paying for guest artists, lighting and sound equipment maintenance, and storage costs. “I have played with the Lake Norman Big Band since August 2013. My intent was to be a substitute player and come as needed, but one of the thencurrent players was retiring and moved to Florida,” he recalls, “The rare spot opened, and I gladly accepted the invitation to join the band. Despite being one of the newest members, I was tricked into becoming president last September… it’s a labor of love.” A labor of love indeed, as

members are not paid. The band rehearses once a week and performs on the third Monday of the month at The Finish Line Restaurant & Lounge at George Pappas Victory Lanes in Mooresville. While some members are retired, there are many who balance work, family and time in the band. “This is one aspect that highlights the dedication and love our musicians have for the music,” says Spangler. “The schedule requires a commitment that is truly amazing and inspiring to me as president.” The band plays a high-energy assorted line-up of traditional big band era numbers, but it also features contemporary pieces that challenge the group musically and keep the crowd coming back. “We recognize the importance of meeting the expectations of our [audience]

dancers at our regular performance,” says Spangler. “We play a different set of music at each show to keep things fresh for everyone.” In addition to their home base at Finish Line, the band has also performed at several area locations over the years. Spangler says some of the band’s favorite lake spots include performing in Cornelius near the Veterans Monument, Langtree Plantation, Trump National Golf Club Charlotte and Downtown Statesville. “All of these venues are just beautiful,” he says, “and we love to share our music in these popular lake locations.” — Bek Mitchell-Kidd, photography by Brant Waldeck 

For more information regarding The Lake Norman Big Band, visit www.thelakenormanbigband. com or look for the group on Facebook.