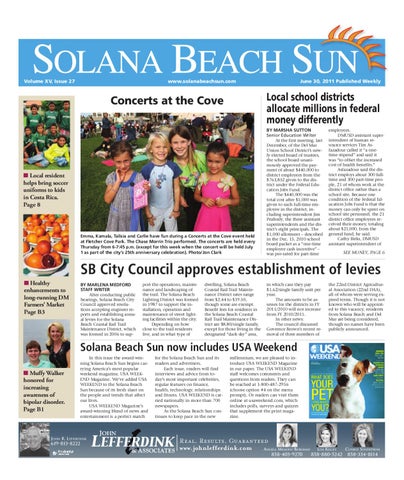 Concerts at the Cove

Emma, Kamala, Talisia and Carlie have fun during a Concerts at the Cove event held at Fletcher Cove Park. The Chase Morrin Trio performed. The concerts are held every Thursday from 6-7:45 p.m. (except for this week when the concert will be held July 1 as part of the city’s 25th anniversary celebration). Photo/Jon Clark

BY MARSHA SUTTON Senior Education Writer At the first meeting, last December, of the Del Mar Union School District’s newly elected board of trustees, the school board unanimously approved the payment of about $440,000 to district employees from the $763,852 given to the district under the Federal Education Jobs Fund. The $440,000 was the total cost after $1,000 was given to each full-time employee in the district, including superintendent Jim Peabody, the three assistant superintendents and the district’s eight principals. The $1,000 allotment – described in the Dec. 15, 2010 school board packet as a “one-time employee cash incentive” – was pro-rated for part-time

employees. DMUSD assistant superintendent of human resource services Tim Asfazadour called it “a onetime stipend” and said it was “to offset the increased cost of health benefits.” Asfazadour said the district employs about 300 fulltime and 300 part-time people, 21 of whom work at the district office rather than a school site. Because one condition of the Federal Education Jobs Fund is that the money can only be spent on school site personnel, the 21 district office employees received their money, totaling about $21,000, from the general fund, he said. Cathy Birks, DMUSD assistant superintendent of

port the operations, maintenance and landscaping of the trail. The Solana Beach Lighting District was formed in 1987 to support the installation, operation and maintenance of street lighting facilities within the city. Depending on how close to the trail residents live, and in what type of

in which case they pay $1.62/single family unit per year. The amounts to be assesses for the districts in FY 2011/2010 will not increase from FY 2010/2011. In other news: The council discussed Governor Brown’s recent removal of three members of

the 22nd District Agricultural Association (22nd DAA), all of whom were serving expired terms. Though it is not known who will be appointed to this vacancy, residents from Solana Beach and Del Mar are being considered, though no names have been publicly announced.

for the Solana Beach Sun and its readers and advertisers. Each issue, readers will find interviews and advice from today’s most important celebrities, regular features on finance, health, technology, relationships and fitness. USA WEEKEND is carried nationally in more than 700 newspapers. As the Solana Beach Sun continues to keep pace in the new

millennium, we are pleased to introduce USA WEEKEND Magazine in our paper. The USA WEEKEND staff welcomes comments and questions from readers. They can be reached at 1-800-487-2956 (choose option #4 on the menu prompt). Or readers can visit them online at usaweekend.com, which includes polls, surveys and quizzes that supplement the print magazine.

IT TAKES A VILLAGE—Solana Beach residents rolled-up their sleeves for a special planting at the recently renovated Fletcher Cove Community Center. These helping hands put the finishing touches on the area surrounding the community center, which is re-opening Friday, July 1, as part of the city’s anniversary celebration. Solana Beach Councilman Mike Nichols has spearheaded the landscaping efforts, dedicating dozens of hours to the project. Local nurseries Solana Succulents and Cedros Gardens also pitched in, offering discounted materials and support. Solana Beach’s Peter House is shown directly above bringing his special touch to the effort. Photo/Jon Clark

and healing in a smallgroup setting. Email fwgrant@earthlink.net or call 760-533-1520. • The Solana Beach Farmers’ Market is open from 1 to 5 p.m. at the south end of Cedros Avenue every Sunday. For more information, please visit cedrosdesigndistrict. net. Monday, July 4 Come join the fun for an Independence Day Parade on Monday, July 4, at Powerhouse Park beginning at 9 a.m. The Del Mar Foundation invites the families of Del Mar to decorate their bikes, scooters, wagons, baby strollers and leashed pets, and become part of this annual tradition. So dress in patriotic

colors and stroll down to the Powerhouse at 9 a.m. to see the parade and enjoy the music. Everyone is invited to enjoy the music and cold lemonade. The event is free of charge. Adult supervision is required for all children. Thursday, July 7 • Solana Beach continues its Concerts at the Cove series with the Symphony Brass Quintet from 6 to 7:45 p.m. For more information, visit 858-7202453 or visit cityofsolanabeach.org or solana-beach. hdso.net/Events/CS_Concerts.pdf. Fletcher Cove Park is at 140 So. Sierra Ave, Solana Beach.

Celebrate the City of Solana Beach at special event July 1 The City of Solana Beach celebrates its 25th anniversary July 1 from 5:30 to 9:30 p.m. at Fletcher Cove Community, 140 South Sierra. The event will begin with the 5:30 p.m. re-opening of Fletcher Cove Community Center. After that there will be a 6 p.m. free concert at Fletcher Cove Park featuring music from 1986, the year Solana Beach was incorporated as a city. At 6:45 p.m. there will also be magician show, plus arts and crafts for kids. At 7 p.m. the band takes the stage again, and at 7:45 city dignitaries past and present will be recognized, and talk about what it took to make Solana Beach a city, and where they feel it is now going. The event ends with an 8:45 p.m. laser light show. For more information, call 858-720-2453.