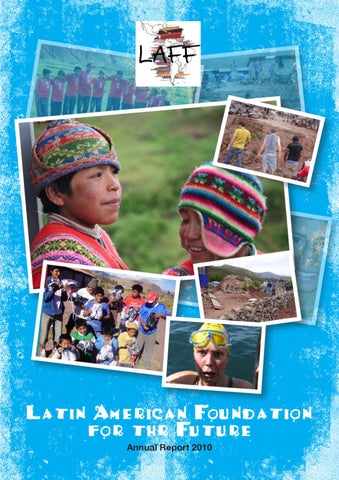 Message from our Founder

Thank you for taking the time to read LAFF’s second Annual Report. This has been a year of consolidation - the progress we have been able to make since our legal registration as a UK charity is fantastic and 2009-10 has seen LAFF grow from strength to strength both in the UK and overseas so we have lots to share with you this year.

A snap shot of Azul Wasi

As well as seeing significant growth in terms of our fundraising, we have been able to widen our support for overseas projects this year to help provide education for girls in remote villages in the Andes, a

proud achievement only possible through our project partners Amantani. It’s been wonderful to return to Peru to see how things are progressing at Azul Wasi children’s home too. However 2009-10 has also been a year of challenges, both in a fun sense in the UK with our Trustees and supporters undertaking a number of physical challenges to raise sponsorship, but also for our project partners overseas who have faced severe floods seriously affecting both our project sites and the people we support.

It’s at such times that you realise how lucky we are lucky to have a dedicated supporter network to call upon when help is most needed, and I thank each one of you for the generosity you have shown when LAFF has asked. Above all, this has meant that we have been able to continue our mission of empowering forgotten people to change their own destinies, even when plagued by natural disaster. You can read more about the floods in Peru and how LAFF helped in this report.

News from the UK... Trustees and Supporters swim the English Channel Leading by example in the year of challenges, some of LAFF’s Trustee Board, along with other dedicated supporters, undertook months of training in freezing cold waters in preparation of their relay swim from Dover to France. On July 29th 2009, a team of six successful completed their challenge reaching France in 13 hours, 10 minutes and 17 seconds raising over £12,000 for LAFF.

Amantani Project is supported by a Triathlon of Extreme Measures Meanwhile, elsewhere in the UK Fred Branson and a team of supporters completed another epic challenge, cycling from Lands End to John O’Groats, swimming Lake Windemere and completing the Three Peaks to raise money for a girl’s boarding school in a remote village in the Peruvian Andes. The Triathlon of Extreme Measures raised £12,000 for the girl’s boarding school.

However without adequate funding for homes like Azul Wasi, high-risk children have nowhere else to go – they remain on the streets. They have no future prospects and without access to education to gain employable skills, they are forced to turn to petty crime, the drugs trade, even prostitution in order to survive. Currently homes like Azul Wasi are oversubscribed, under-resourced and under-funded. With no State funding, Azul Wasi already struggles and is entirely reliant on grants like those offered by LAFF to be able to provide a decent level of care. Yet Azul Wasi is still asked on a daily basis to take on more street children.

Yet more challenges The summer also saw LAFF’s first ever London to Paris cycle challenge, and first ever sky dive, both raising significant funds and awareness for LAFF’s projects, with Diego Maldonado raising over £1,000 and Anabella Clark raising £115 in total for the charity. We also saw our first ever Latin American challenge, with Ken Dunbar cycling the continent and paying a visit to Azul Wasi children’s home en route, raising hundreds of pounds through doing so.

Other fundraising events In addition to the Challenges the regular LAFF event calendar continued to show success, with a pub quiz raising several hundred pounds and the annual Christmas event, a music and comedy evening at The Bedford in Balham, raising £1,000 more for street children in Peru.

LAFF’s goals: Educate, Empower, Enable To help children living on the street and doing hazardous work to thrive, protected from violence and abuse, and have support to graduate into adulthood with a good education, ‘life skills’, employable skills and a sense of self-worth.

‘The Blue House’ caters for boys from six to twenty years old. Some have been found on the streets, others have been rescued from backgrounds of abuse and extreme poverty. As former street children, the boys in Azul Wasi have been exposed to unthinkable situations and are not easy to care for as a result – they require dedicated carers to give parental and psychological support to help them overcome their past and help them towards a better future. Homes for former street children are also not easy to gain funds for – a reputation for involvement in petty crime means there is little sympathy for street children and the stigma attached to them limits financial support as much as it does their integration into community life.

To help children’s homes to support children in their care towards a better future, by ensuring their self-sustainability. Our aim is to create independence from outside help, not dependence

Trustee visit to Azul Wasi In August/September 2009, the LAFF Trustee board went on a three weeks visit to Peru to evaluate progress at Azul Wasi. Time was spent monitoring and evaluating the projects, discussing and planning future support with Alcides, our project partner on the ground, and gathering information, photos and video footage to share with our supporters. Our project partner at Azul Wasi, Alcides, shared his future vision for the home – a safe, supportive and loving environment that met the needs of individual children. He also expressed his constant concern for the financial stability of the home – with no support from the state and with no means of generating income, Azul Wasi currently relies entirely on the donations received from charities like LAFF and individuals just to survive. The result of the visit and our conversations was to put a plan into action to work towards future sustainability. In addition to our support for the children’s education and ad-hoc projects, LAFF agreed to fund a permanent guardian at Azul Wasi so that the children had a constant ‘parent’. The funding for the guardian would come alongside funding for a guinea pig farm project – with the mutual intention that in some year’s time, the income generated by the guinea pig farm would be equal to the wage of the guardian, thus providing future sustainability for the home, and freeing up LAFF’s funds to support in other ways. The guinea pig project will run alongside the home’s bread oven, greenhouse and small hold, to work towards reducing overheads, generating income, whilst enriching the children’s diet and teaching them practical vocational skills they would otherwise be without.

himself on the streets. He was taken in by Azul Wasi six months ago and has gone from being difficult and introverted to being a confident, happy and loving little boy.

Case Study Fernando was found abandoned as a baby when his mother, unable to cope, left him in a rubbish bin. He was taken in by an elderly couple but when he got older they also found themselves unable to cope and he found

Work was also carried out to finish and improve the bathroom facilities at Azul Wasi, and make general repairs at the home whilst the Trustees were in Peru. Another item on Azul Wasi’s wish list was a mini bus to transport the children to school during the rainy season and collect supplies from Cusco, amongst other needs. LAFF was able to send funds for the mini bus thanks to the Christmas fundraiser event – just in time for it to become a vital piece of equipment for evacuation in February’s floods.

2009 sa focusing w LAFF its effor one spe ts on cific pro ject – Az Wasi - in ul order to aims. In achieve its 2009-10 , throug fantastic h the efforts o partners f on the g our project round w seen the e have se goals start to become a reality , small st eps mak with ing a big differen ce.

Flooding in Cusco In February 2010, the Cusco region was hit by heavy flooding, the worst seen in decades. Although the international media picked up the story of tourists stranded at Machu Picchu, they failed to report on the devastating situation for local people. 3,000 homes were completely destroyed, and thousands of residents had to evacuate for weeks - struggling to meet their basic needs and in a constant battle to prevent their homes being consumed by the rising flood waters. Sadly, Azul Wasi was one of those homes. LAFF worked hard to communicate the local perspective to the BBC to increase awareness and support. We also coordinated an emergency relief effort to support Azul Wasi, who had to evacuate and construct flood barriers, as well as provide shelter, food, water, supervision and care for the children at an especially difficult time. We’re grateful for all the volunteer support and donations received at this crucial time which ensured that the home now still stands and the children remained safe throughout this distressing time. There now exists a flood defence wall protecting the home from potential future floods and we are working to repair any structural damage to the home and its grounds as well as ensure its future stability. Happily the boys have returned to the home and have been able to return to school at the start of the academic year in March.

THANK YOU To all our volunteers, partners and supporters including: Project Partners: 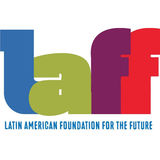