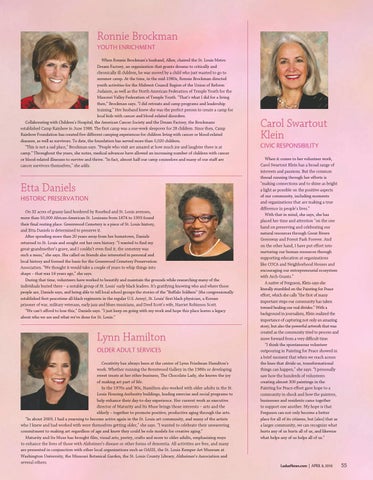 When Ronnie Brockman’s husband, Allen, chaired the St. Louis Metro Dream Factory, an organization that grants dreams to critically and chronically ill children, he was moved by a child who just wanted to go to summer camp. At the time, in the mid-1980s, Ronnie Brockman directed youth activities for the Midwest Council Region of the Union of Reform Judaism, as well as the North American Federation of Temple Youth for the Missouri Valley Federation of Temple Youth. “That’s what I did for a living then,” Brockman says. “I did retreats and camp programs and leadership training.” Her husband knew she was the perfect person to create a camp for local kids with cancer and blood-related disorders. Collaborating with Children’s Hospital, the American Cancer Society and the Dream Factory, the Brockmans established Camp Rainbow in June 1988. The first camp was a one-week sleepover for 28 children. Since then, Camp Rainbow Foundation has created five different camping experiences for children living with cancer or blood-related diseases, as well as survivors. To date, the foundation has served more than 5,020 children. “This is not a sad place,” Brockman says. “People who visit are amazed at how much joy and laughter there is at camp.” Throughout the years, she notes, medical advances have allowed an increasing number of children with cancer or blood-related illnesses to survive and thrive. “In fact, almost half our camp counselors and many of our staff are cancer survivors themselves,” she adds.

On 32 acres of grassy land bordered by Rosebud and St. Louis avenues, more than 50,000 African-American St. Louisans from 1874 to 1993 found their final resting place. Greenwood Cemetery is a piece of St. Louis history, and Etta Daniels is determined to preserve it. After spending more than 20 years away from her hometown, Daniels returned to St. Louis and sought out her own history. “I wanted to find my great-grandmother’s grave, and I couldn’t even find it, the cemetery was such a mess,” she says. She called on friends also interested in personal and local history and formed the basis for the Greenwood Cemetery Preservation Association. “We thought it would take a couple of years to whip things into shape – that was 16 years ago,” she says. During that time, volunteers have worked to beautify and maintain the grounds while researching many of the individuals buried there – a notable group of St. Louis’ early black leaders. It’s gratifying knowing who and where those people are, Daniels says, and being able to tell local school groups the stories of the “Buffalo Soldiers” (the congressionally established first peacetime all-black regiments in the regular U.S. Army), St. Louis’ first black physician, a Korean prisoner of war, military veterans, early jazz and blues musicians, and Dred Scott’s wife, Harriet Robinson Scott. “We can’t afford to lose this,” Daniels says. “I just keep on going with my work and hope this place leaves a legacy about who we are and what we’ve done for St. Louis.”

Lynn Hamilton older adult services Creativity has always been at the center of Lynn Friedman Hamilton’s work. Whether running the Brentwood Gallery in the 1980s or developing sweet treats at her other business, The Chocolate Lady, she knows the joy of making art part of life. In the 1970s and ’80s, Hamilton also worked with older adults in the St. Louis Housing Authority buildings, leading exercise and social programs to help enhance their day-to-day experience. Her current work as executive director of Maturity and Its Muse brings those interests – arts and the elderly – together to promote positive, productive aging through the arts. “In about 2009, I had a yearning to become active again in the St. Louis art community, and many of the artists who I knew and had worked with were themselves getting older,” she says. “I wanted to celebrate their unwavering commitment to making art regardless of age and knew they could be role models for creative aging.” Maturity and Its Muse has brought film, visual arts, poetry, crafts and more to older adults, emphasizing ways to enhance the lives of those with Alzheimer’s disease or other forms of dementia. All activities are free, and many are presented in conjunction with other local organizations such as OASIS, the St. Louis Kemper Art Museum at Washington University, the Missouri Botanical Garden, the St. Louis County Library, Alzheimer’s Association and several others.

When it comes to her volunteer work, Carol Swartout Klein has a broad range of interests and passions. But the common thread running through her efforts is “making connections and to shine as bright a light as possible on the positive aspects of our community, including moments and organizations that are making a true difference in people’s lives.” With that in mind, she says, she has placed her time and attention “on the one hand on preserving and celebrating our natural resources through Great Rivers Greenway and Forest Park Forever. And on the other hand, I have put effort into nurturing our human resources through supporting education at organizations like COCA and Neighborhood Houses and encouraging our entrepreneurial ecosystem with Arch Grants.” A native of Ferguson, Klein says she literally stumbled on the Painting for Peace effort, which she calls “the first of many important steps our community has taken toward healing our real divides.” With a background in journalism, Klein realized the importance of capturing not only an amazing story, but also the powerful artwork that was created as the community tried to process and move forward from a very difficult time. “I think the spontaneous volunteer outpouring in Painting for Peace showed in a brief moment that when we reach across the lines that divide us, transformational things can happen,” she says. “I personally saw how the hundreds of volunteers creating almost 300 paintings in the Painting for Peace effort gave hope to a community in shock and how the painters, businesses and residents came together to support one another. My hope is that Ferguson can not only become a better place for all of its citizens, but [also] that as a larger community, we can recognize what hurts any of us hurts all of us, and likewise what helps any of us helps all of us.”