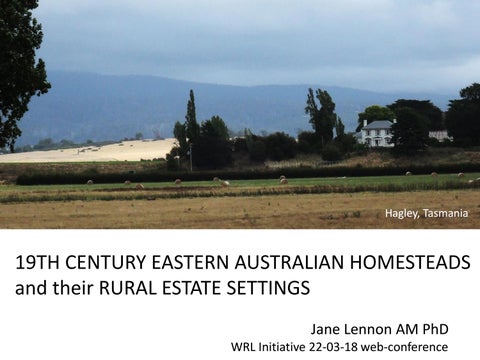 Europeans entered Terra Australis with their herds to establish rural estates or ‘squatting stations’ as they were then called, but it was already occupied – for 60, 000 years

Europeans entered a stable landscape, described variously by the new settlers as park-like ‘splendid, open country consisting of plains and downs’ and ‘a wildflower garden’ (Rolls, 1997:39). The rate of human-induced change in the landscape after 1788 accelerated rapidly: Australia ‘experienced colonization and industrialization … a compressed, double revolution’ (Griffiths, 1997: 4).

Elizabeth Bay House is a Greek Revival style building, originally surrounded by a 54-acre garden on the foreshore of Sydney Harbour , but now situated within a densely populated inner city suburb. It was a textbook example of the picturesque school. Elizabeth Bay and Sydney from Mrs Darling's Point Road by Conrad Martens, c1848.

Pastoral Empires 1830-1915 As in England, a grand country estate represented the pinnacle of social and material achievement. In front of the homestead often in the latest Italianate design there was a formal garden in geometric pattern, with orchard and squared cutting and vegetable gardens out of sight to the side of the main building. The main driveway and a belt of English trees created a parklike setting.

As well as in central Tasmania, the Western District of Victoria with some of the richest agricultural land in Australia had many grand holdings by 1870, as well as the Cumberland Plain along the Nepean River valley, the Bathurst plains and in the Hunter Valley of NSW and on the Darling Downs of southern Queensland. Yalla-y-Poora 1864, by Eugene Von Guerard

Wooriwyrite, a 30 room two storey homestead located on the Mt Emu Creek, near Noorat, western district of Victoria, was erected in 1883 for influential Scottish born pastoralist Thomas Shaw. It was designed by local architect Alexander Hamilton and replaced a late 1840's homestead. The unusual and massive Victorian Italianate style homestead is one of the largest in Western Victoria, and intact. Within the grounds are an array of stone walls, out houses and farmyard remnants, surrounded by picturesque parkland. One of the great pleasures of a large farm garden is that space is no constraint and each garden enjoys the benefit of large trees that frame distant landscape views.

An 1840s pastoral estate which has maintained its view lines to the mountains and broad acre grazing and valley cropping character.

The â&#x20AC;&#x2DC;Harrowâ&#x20AC;&#x2122; homestead and property, just west of Cambooya, has one of the largest holdings on the eastern Darling Downs, Queensland. Inspired by the great estates of the UK, the homestead was built in 1860s for Englishman, Robert Ramsay.

A pastoral landscape replaced by cotton in the last decade

Convict-made sheep country; native vegetation removed and â&#x20AC;&#x2DC;living fencesâ&#x20AC;&#x2122; [i.e hawthorn hedges] planted in the 1820s. The owners, seventh generation of the Archer family, need to introduce new crops to remain viable as a farm; but it must remain within the historic fence lines of hedges.

Despite maintaining the 1843 Magnolia in the courtyard, garden and old trees it has become a recreation parkland

Woodlands anticlockwise: 1860, 1993, 2016, 2015 The farming landscape of 1860 has been replaced with streamside vegetation, encroaching red gum woodland and kangaroos. This is the objective of a National Parks Service historic park, although retired race horses graze the front paddocks.

Significant for its surviving outbuildings and fencing, which demonstrate a variety of vernacular building construction techniques and materials utilised by settlers in the developing colony. These, together with remnant farm machinery, citrus plantings and Olive and White Mulberry groves are also representative of early agricultural industries developed during the early colonial period.

Some of the excellent studies of rural Estates; as well as Australian Garden History Society journal from 1992

ISSUES 1. Most historic rural estates have passed out of ownership of the original families who created them except in Tasmania. Australiaâ&#x20AC;&#x2122;s population is 90 % urban. 2. Existing planning and heritage legislation applies to the homestead, some outbuildings like shearing sheds and the enclosed garden but not the wider estate. 3. Gardens and exotic plantings of trees in parklike settings have not been maintained as owners cannot afford a team of garden staff. 4. Most local government areas have undertaken biodiversity surveys but the surveyors fail to see the clump of Araucarias and cordylines or yuccas, clues from a colonial garden. 5. Even in historic garden management people are appointed without a proper â&#x20AC;&#x2DC;apprenticeshipâ&#x20AC;&#x2122; to some more experienced person who knew and had a feel for the original spirit of the garden and rural estate in its original design, layout, planting, succession of growth, seasonal variations and would willingly pass on this knowledge. 6. Changing economics and global markets have led to a change from pastoral production on rural estates to high value crops like cotton in the north, opium poppies, wine grapes, lucerne and rotations of grains like sorghum, canola, wheat. 7.

ISSUES â&#x20AC;&#x201C;maintenance of over mature avenues

ISSUES â&#x20AC;&#x201C;replacement of senescent garden planting in a drought landscape

ISSUES â&#x20AC;&#x201C;every year a number of significant rural homesteads and their garden estates are destroyed by bushfires

The ongoing boom in rural property values has attracted wealthy entrepreneurs who want both an historic colonial homestead often with park like gardens and a working property. Recent sales of historic homesteads have been to wealthy off-farm owners as a destination to visit; for visitor accommodation to offset maintenance costs; for corporate retreats and functions.

Is this enough to keep the designed cultural landscapes of these places intact and understood?

SOLUTIONS: Maintaining about 3,000 kilometres of historic hawthorn hedges remaining from tens of thousands of kilometres of hedges around Tasmania in the nineteenth century, When wire fencing developed, new roads and small five acre lots were developed, many hedges were pulled out, others died or became senescent. Although not protected by planning legislation, you can appeal to the owners to look after them. To make hedges stock proof, they are cut and laid every 20 to 30 years.