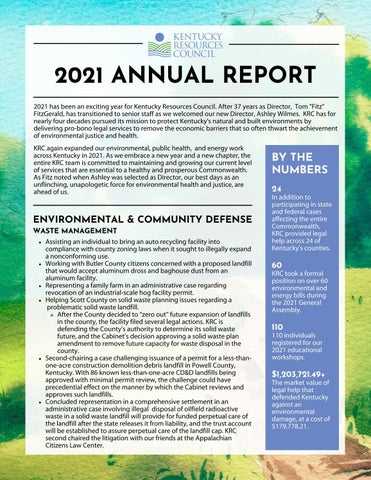 2021 ANNUAL REPORT 2021 has been an exciting year for Kentucky Resources Council. After 37 years as Director, Tom &quot;Fitz&quot; FitzGerald, has transitioned to senior staff as we welcomed our new Director, Ashley Wilmes. KRC has for nearly four decades pursued its mission to protect Kentucky&#39;s natural and built environments by delivering pro-bono legal services to remove the economic barriers that so often thwart the achievement of environmental justice and health. KRC again expanded our environmental, public health, and energy work across Kentucky in 2021. As we embrace a new year and a new chapter, the entire KRC team is committed to maintaining and growing our current level of services that are essential to a healthy and prosperous Commonwealth. As Fitz noted when Ashley was selected as Director, our best days as an unflinching, unapologetic force for environmental health and justice, are ahead of us.

ENVIRONMENTAL &amp; COMMUNITY DEFENSE WASTE MANAGEMENT Assisting an individual to bring an auto recycling facility into compliance with county zoning laws when it sought to illegally expand a nonconforming use. Working with Butler County citizens concerned with a proposed landfill that would accept aluminum dross and baghouse dust from an aluminum facility. Representing a family farm in an administrative case regarding revocation of an industrial-scale hog facility permit. Helping Scott County on solid waste planning issues regarding a problematic solid waste landfill. After the County decided to “zero out&quot; future expansion of landfills in the county, the facility filed several legal actions. KRC is defending the County’s authority to determine its solid waste future, and the Cabinet’s decision approving a solid waste plan amendment to remove future capacity for waste disposal in the county. Second-chairing a case challenging issuance of a permit for a less-thanone-acre construction demolition debris landfill in Powell County, Kentucky. With 86 known less-than-one-acre CD&amp;D landfills being approved with minimal permit review, the challenge could have precedential effect on the manner by which the Cabinet reviews and approves such landfills. Concluded representation in a comprehensive settlement in an administrative case involving illegal disposal of oilfield radioactive waste in a solid waste landfill will provide for funded perpetual care of the landfill after the state releases it from liability, and the trust account will be established to assure perpetual care of the landfill cap. KRC second chaired the litigation with our friends at the Appalachian Citizens Law Center.

In addition to participating in state and federal cases affecting the entire Commonwealth, KRC provided legal help across 24 of Kentucky&#39;s counties.

KRC took a formal position on over 60 environmental and energy bills during the 2021 General Assembly.

110 individuals registered for our 2021 educational workshops.

The market value of legal help that defended Kentucky against an environmental damage, at a cost of $179,778.21.

LAND Representing the Bernheim Foundation in a defense to the condemnation action filed by LG&amp;E, which is seeking to construct a natural gas pipeline across Bernheim and adjoining properties. Also assisting in challenging the a water quality certification and stream construction permit issued for that pipeline. Negotiated a settlement with a utility company to replace loss of tree canopy caused by easement clearance. Authored a &quot;friend of the court&quot; brief before the 6th Circuit Court of Appeals in a constitutional challenge to Kentucky’s Billboard Act. KRC’s brief argued that the District Court erred in finding the entire billboard law unconstitutional. While waiting for the court&#39;s decision numerous billboards were erected along Kentucky highways without permits and complying with spacing restrictions. Efforts by those companies to have their illegal billboards “grandfathered” were defeated by KRC and allies in the 2021General Assembly, which repealed and reenacted the billboard laws. Assisted in challenging construction of a VA hospital in a location not accessible to many veterans, as to whether or not it complied with the National Environmental Policy Act. &quot;I appreciate KRC&#39;s help throughout the process of trying to protect tree lines on my property. Without your generous help, my case would not have been taken seriously. I am thankful for your assistance with my case.&quot; - Bluegrass Region Resident

MINING &amp; GAS Addressing odors and noise from a natural gas compressor facility in Pike County. Challenging a proposed surface limestone mining operation that could negatively impact local streams and habitat for endangered mussel species, and adversely affect a historical civil war state park. Challenging a proposed clay mining operation. Working with solid waste board in Pendleton County to revise a county&#39;s solid waste plan and to determine whether to support a proposed expansion of a landfill. Seeking reassertion of Energy &amp; Environmental Cabinet jurisdiction over a mining operation for which performance bond was released, after a blow out on the upper side of a seam caused washout of hillside above client&#39;s property. Challenging a rulemaking action by the Office of Surface Mining weakening federal oversight of state program implementation under the 1977 Surface Mining Act. Working with a private law firm representing Casey County citizens whose use of their home has been adversely affected by the noise from a series of compressor pumps on a natural gas pipeline. Litigating the eligibility of a property in Harlan County for Abandoned Mine Land funding for creek bank damage. Advising several counties on solid waste planning issues. Opposing coal strip mining in Sloan Valley cave system.

RENEWABLE ENERGY &amp; UTILITIES Challenging the Public Service Commission&#39;s (PSC) denial of intervention to two landowners whose properties abut a proposed cell tower site. Court of Appeals decision in favor of the landowners sets important precedent regarding judicial review of denials of intervention by the PSC. Represented Mountain Association (MA), Kentuckians for the Commonwealth (KFTC), and the Kentucky Solar Energy Society (KYSES) as Joint Intervenors, in the Kentucky Power Company net metering rate case before the PSC. This was the first case in Kentucky in which a PSC-regulated electric utility proposed to end 1:1 net metering credit for rooftop solar, and to drastically reduce the value of the electricity fed into the grid. Decision on how to set fair rates for fed-in solar established several important precedents that the Commission applied in the LG&amp;E and KU rate cases, where KRC represented MA, KFTC, KYSES, and Metropolitan Housing Coalition (MHC). Representing MHC in the Kentucky Court of Appeals concerning denial of intervention to lowincome advocates. The case has significant ramifications for judicial review of intervention denials by the PSC. Representing MA and the KYSES in a pending case involving the standards for interconnecting renewable energy sources to the utility grids.

CENTER FOR ENVIRONMENTAL POLICY 2021 KENTUCKY GENERAL ASSEMBLY During the 2021 session, KRC worked on several pieces of proposed legislation, seeking changes to or registering our opposition to bills. Among these included:

companies and applicators. HB 236 includes KRC language directing the Department to develop a regulatory program for notification and application of pesticides for lawn care and mosquito control.

HB320 Encourages expansion of rural broadband and provides funds to encourage projects to serve underserved and unserved areas. It includes language sought by KRC that the PSC has authority to review any proposal by electric co-ops to pledge regulated assets to capitalize affiliated broadband ventures.

addressing an issue regarding the on-site and off-site distinction that resulted in a judicial decision voiding the Billboard Act.

feasibility of adopting an electronic waste disposal program in Kentucky. Did not pass, but expected to be refiled in 2022.

the Kentucky Infrastructure Authority for the Drinking Water and Wastewater Grant Program.

Environmental Justice 101 Featured KRC&#39;s own Tom FitzGerald alongside Jacqui Patterson, Senior Director of NAACP Environmental and Climate Justice Program, with Arnita Gadson, Executive Director of West Jefferson County Community Task Force, and Liz Mosler, KRC Staff Attorney on the Q&amp;A Panel. Gathering Information on Environmental Concerns Featured Michelle King with Louisville Metro Air Pollution Control District, and Sarah Lynn Cunningham, Executive Director of the Louisville Climate Action Network. Advocating or Environmental Concerns Featured Chris Schimmoeller, Kentucky Environmental Activist, Mark Morgan, Retired Attorney, and Cassia Herron, co-founder and president of the Louisville Associate for Community Economics and leading efforts for the Louisville Community Grocery. We also produced a webinar for those interested in pursuing a professional environmental law path. In the fall, we partnered with the University of Louisville Brandeis School of Law&#39;s Journal of Animal and Energy Law to produce the session Careers in Environmental and Energy Law. Additionally, we have expanded the ways that you can access our educational resources. You can find recordings of our 2021 KELI webinars available on YouTube and our podcast episodes available wherever you listen to podcasts. Information about upcoming 2022 workshops will be available on kyrc.org.

Learn about what happened at Kentucky Resources Council during 2021.