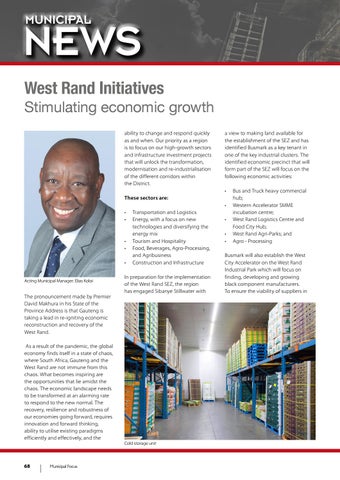 Stimulating economic growth ability to change and respond quickly as and when. Our priority as a region is to focus on our high-growth sectors and infrastructure investment projects that will unlock the transformation, modernisation and re-industrialisation of the different corridors within the District.

a view to making land available for the establishment of the SEZ and has identified Busmark as a key tenant in one of the key industrial clusters. The identified economic precinct that will form part of the SEZ will focus on the following economic activities: •

The pronouncement made by Premier David Makhura in his State of the Province Address is that Gauteng is taking a lead in re-igniting economic reconstruction and recovery of the West Rand. As a result of the pandemic, the global economy finds itself in a state of chaos, where South Africa, Gauteng and the West Rand are not immune from this chaos. What becomes inspiring are the opportunities that lie amidst the chaos. The economic landscape needs to be transformed at an alarming rate to respond to the new normal. The recovery, resilience and robustness of our economies going forward, requires innovation and forward thinking, ability to utilise existing paradigms efficiently and effectively, and the

Transportation and Logistics Energy, with a focus on new technologies and diversifying the energy mix Tourism and Hospitality Food, Beverages, Agro-Processing, and Agribusiness Construction and Infrastructure

In preparation for the implementation of the West Rand SEZ, the region has engaged Sibanye Stillwater with

Busmark will also establish the West City Accelerator on the West Rand Industrial Park which will focus on finding, developing and growing black component manufacturers. To ensure the viability of suppliers in