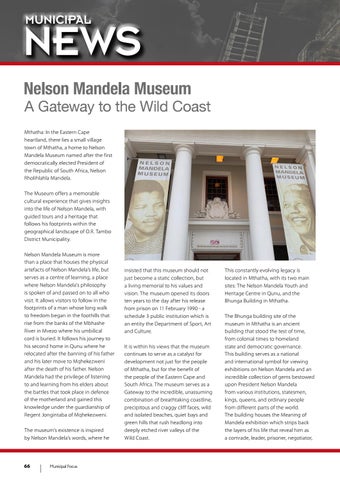 A Gateway to the Wild Coast Mthatha: In the Eastern Cape heartland, there lies a small village town of Mthatha, a home to Nelson Mandela Museum named after the first democratically elected President of the Republic of South Africa, Nelson Rholihlahla Mandela. The Museum offers a memorable cultural experience that gives insights into the life of Nelson Mandela, with guided tours and a heritage that follows his footprints within the geographical landscape of O.R. Tambo District Municipality. Nelson Mandela Museum is more than a place that houses the physical artefacts of Nelson Mandela’s life, but serves as a centre of learning, a place where Nelson Mandela’s philosophy is spoken of and passed on to all who visit. It allows visitors to follow in the footprints of a man whose long walk to freedom began in the foothills that rise from the banks of the Mbhashe River in Mvezo where his umbilical cord is buried. It follows his journey to his second home in Qunu where he relocated after the banning of his father and his later move to Mqhekezweni after the death of his father. Nelson Mandela had the privilege of listening to and learning from his elders about the battles that took place in defence of the motherland and gained this knowledge under the guardianship of Regent Jongintaba of Mqhekezweni. The museum’s existence is inspired by Nelson Mandela’s words, where he

insisted that this museum should not just become a static collection, but a living memorial to his values and vision. The museum opened its doors ten years to the day after his release from prison on 11 February 1990 - a schedule 3 public institution which is an entity the Department of Sport, Art and Culture. It is within his views that the museum continues to serve as a catalyst for development not just for the people of Mthatha, but for the benefit of the people of the Eastern Cape and South Africa. The museum serves as a Gateway to the incredible, unassuming combination of breathtaking coastline, precipitous and craggy cliff faces, wild and isolated beaches, quiet bays and green hills that rush headlong into deeply etched river valleys of the Wild Coast.

This constantly evolving legacy is located in Mthatha, with its two main sites: The Nelson Mandela Youth and Heritage Centre in Qunu, and the Bhunga Building in Mthatha. The Bhunga building site of the museum in Mthatha is an ancient building that stood the test of time, from colonial times to homeland state and democratic governance. This building serves as a national and international symbol for viewing exhibitions on Nelson Mandela and an incredible collection of gems bestowed upon President Nelson Mandela from various institutions, statesmen, kings, queens, and ordinary people from different parts of the world. The building houses the Meaning of Mandela exhibition which strips back the layers of his life that reveal him as a comrade, leader, prisoner, negotiator,