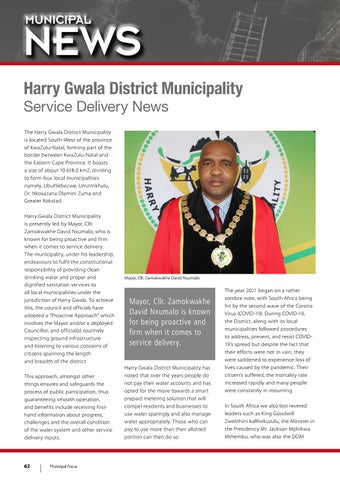 NEWS Harry Gwala District Municipality Service Delivery News The Harry Gwala District Municipality is located South-West of the province of KwaZulu-Natal, forming part of the border between KwaZulu-Natal and the Eastern Cape Province. It boasts a size of about 10 618.0 km2, dividing to form four local municipalities namely, Ubuhlebezwe, Umzimkhulu, Dr. Nkosazana Dlamini Zuma and Greater Kokstad. Harry Gwala District Municipality is presently led by Mayor, Cllr. Zamokwakhe David Nxumalo, who is known for being proactive and firm when it comes to service delivery. The municipality, under his leadership, endeavours to fulfil the constitutional responsibility of providing clean drinking water and proper and dignified sanitation services to all local municipalities under the jurisdiction of Harry Gwala. To achieve this, the council and officials have adopted a “Proactive Approach” which involves the Mayor and/or a deployed Councillor, and official(s) routinely inspecting ground infrastructure and listening to various concerns of citizens spanning the length and breadth of the district. This approach, amongst other things ensures and safeguards the process of public participation, thus guaranteeing smooth operation, and benefits include receiving firsthand information about progress, challenges and the overall condition of the water system and other service delivery inputs.

Mayor, Cllr. Zamokwakhe David Nxumalo is known for being proactive and firm when it comes to service delivery. Harry Gwala District Municipality has noted that over the years people do not pay their water accounts and has opted for the move towards a smart prepaid metering solution that will compel residents and businesses to use water sparingly and also manage water appropriately. Those who can pay to use more than their allotted portion can then do so.

The year 2021 began on a rather sombre note, with South Africa being hit by the second wave of the Corona Virus (COVID-19). During COVID-19, the District, along with its local municipalities followed procedures to address, prevent, and resist COVID19’s spread but despite the fact that their efforts were not in vain, they were saddened to experience loss of lives caused by the pandemic. Their citizen’s suffered, the mortality rate increased rapidly and many people were constantly in mourning. In South Africa we also lost revered leaders such as King Goodwill Zwelithini kaBhekuzulu, the Minister in the Presidency Mr. Jackson Mphikwa Mthembu, who was also the DDM