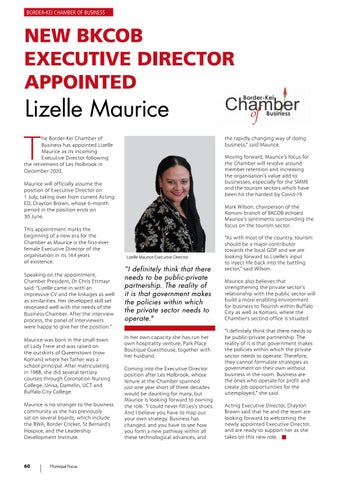 he Border-Kei Chamber of Business has appointed Lizelle Maurice as its incoming Executive Director following the retirement of Les Holbrook in December 2020.

the rapidly changing way of doing business,” said Maurice. Moving forward, Maurice’s focus for the Chamber will revolve around member retention and increasing the organisation’s value add to businesses, especially for the SMME and the tourism sectors which have been hit the hardest by Covid-19.

Maurice will officially assume the position of Executive Director on 1 July, taking over from current Acting ED, Drayton Brown, whose 6-month period in the position ends on 30 June. This appointment marks the beginning of a new era for the Chamber as Maurice is the first-ever female Executive Director of the organisation in its 144 years of existence. Speaking on the appointment, Chamber President, Dr Chris Ettmayr said: “Lizelle came in with an impressive CV and the linkages as well as similarities. Her developed skill set resonated well with the needs of the Business Chamber. After the interview process, the panel of interviewers were happy to give her the position.” Maurice was born in the small town of Lady Frere and was raised on the outskirts of Queenstown (now Komani) where her father was a school principal. After matriculating in 1988, she did several tertiary courses through Coronation Nursing College, Unisa, Damelin, UCT and Buffalo City College. Maurice is no stranger to the business community as she has previously sat on several boards, which include the BWA, Border Cricket, St Bernard’s Hospice, and the Leadership Development Institute.

Mark Wilson, chairperson of the Komani branch of BKCOB echoed Maurice’s sentiments surrounding the focus on the tourism sector.

“I definitely think that there needs to be public-private partnership. The reality of it is that government makes the policies within which the private sector needs to operate." In her own capacity she has run her own hospitality venture, Park Place Boutique Guesthouse, together with her husband. Coming into the Executive Director position after Les Holbrook, whose tenure at the Chamber spanned just one year short of three decades would be daunting for many, but Maurice is looking forward to owning the role. “I could never fill Les’s shoes. And I believe you have to map out your own strategy. Business has changed, and you have to see how you form a new pathway within all these technological advances, and

“As with most of the country, tourism should be a major contributor towards the local GDP and we are looking forward to Lizelle’s input to inject life back into the battling sector,” said Wilson. Maurice also believes that strengthening the private sector’s relationship with the public sector will build a more enabling environment for business to flourish within Buffalo City as well as Komani, where the Chamber’s second office is situated. “I definitely think that there needs to be public-private partnership. The reality of it is that government makes the policies within which the private sector needs to operate. Therefore, they cannot formulate strategies as government on their own without business in the room. Business are the ones who operate for profit and create job opportunities for the unemployed,” she said. Acting Executive Director, Drayton Brown said that he and the team are looking forward to welcoming the newly appointed Executive Director, and are ready to support her as she takes on this new role.