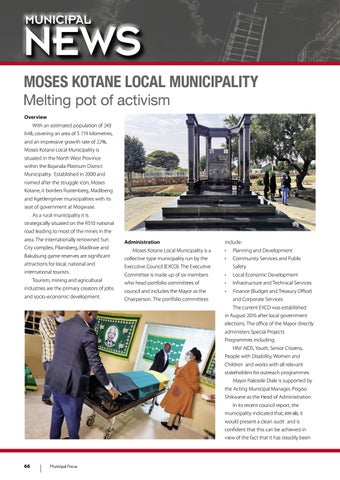 Melting pot of activism Overview With an estimated population of 243 648, covering an area of 5 719 kilometres, and an impressive growth rate of 22%, Moses Kotane Local Municipality is situated in the North West Province within the Bojanala Platinum District Municipality. Established in 2000 and named after the struggle icon, Moses Kotane, it borders Rustenberg, Madibeng and Kgetlengriver municipalities with its seat of government at Mogwase. As a rural municipality it is strategically situated on the R510 national road leading to most of the mines in the area. The internationally renowned Sun City complex, Pilansberg, Madikwe and Bakubung game reserves are significant attractions for local, national and international tourists. Tourism, mining and agricultural industries are the primary creators of jobs and socio-economic development.

Committee is made up of six members

who head portfolio committees of

council and includes the Mayor as the

and Corporate Services The current EXCO was established in August 2016 after local government elections. The office of the Mayor directly administers Special Projects Programmes including; HIV/ AIDS, Youth, Senior Citizens, People with Disability, Women and Children and works with all relevant stakeholders for outreach programmes. Mayor Ralesole Diale is supported by the Acting Municipal Manager, Pogiso Shikwane as the Head of Administration. In its recent council report, the municipality indicated that, inter alia, it would present a clean audit and is confident that this can be achieved in view of the fact that it has steadily been