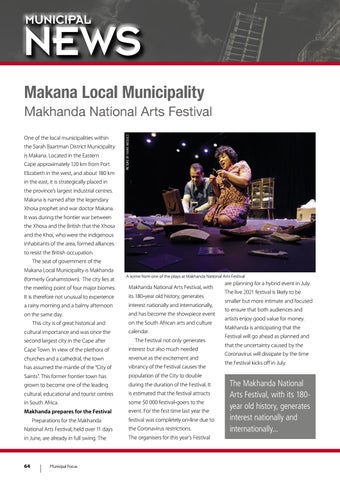 NEWS Makana Local Municipality One of the local municipalities within the Sarah Baartman District Municipality is Makana. Located in the Eastern Cape approximately 120 km from Port Elizabeth in the west, and about 180 km

in the east, it is strategically placed in the province’s largest industrial centres. Makana is named after the legendary Xhosa prophet and war doctor Makana. It was during the frontier war between the Xhosa and the British that the Xhosa and the Khoi, who were the indigenous inhabitants of the area, formed alliances to resist the British occupation. The seat of government of the Makana Local Municipality is Makhanda (formerly Grahamstown). The city lies at

It is therefore not unusual to experience

a rainy morning and a balmy afternoon

on the same day.

and has become the showpiece event

on the South African arts and culture calendar. The Festival not only generates

Cape Town. In view of the plethora of

interest but also much needed

churches and a cathedral, the town

revenue as the excitement and

has assumed the mantle of the “City of

vibrancy of the Festival causes the

Saints”. This former frontier town has

population of the City to double

grown to become one of the leading

during the duration of the Festival. It

is estimated that the festival attracts

Makhanda prepares for the Festival

event. For the first time last year the

Preparations for the Makhanda

festival was completely on-line due to

in June, are already in full swing. The

The organisers for this year’s Festival

are planning for a hybrid event in July. The live 2021 festival is likely to be smaller but more intimate and focused to ensure that both audiences and artists enjoy good value for money. Makhanda is anticipating that the Festival will go ahead as planned and that the uncertainty caused by the Coronavirus will dissipate by the time the Festival kicks off in July.