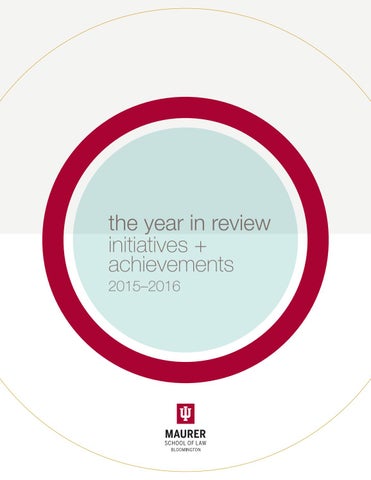 1. Jeannine Bell was named co-editor of the Law and Society Review. She continued to be consulted as a national expert on hate crime and hate crime legislation. 2. Hannah Buxbaum was named scholar-in-residence at WilmerHale’s London office in their litigation and arbitration group. She continued her work as academic director of IU’s Global Gateway in Europe, based in Berlin. 3. Fred H. Cate was named to the Council on Foreign Relations. He begins his second year as IU’s vice president for research. 4. Jessica Eaglin joined the faculty, teaching in the areas of criminal law and procedure. She was appointed this year to the US safety advisory board of Uber. 5. Charles Geyh was named a 2016 Andrew Carnegie Fellow. Selected as one of only 33 in the nation from some 200 applicants, he will be writing a sequel to his new book, Courting Peril: The Political Transformation of the American Judiciary, which was published in February 2016. 6. For the second consecutive year, Bill Henderson was ranked the most influential person in legal education by National Jurist. 7. Feisal al-Istrabadi was appointed to the Atlantic Council Task Force on the Future of Iraq. 8. Leandra Lederman was a visiting professor at the University of Chicago Law School in the fall and was listed as the sixth most cited tax scholar in the US by Brian Leiter’s Law School Reports. 9. Tim Lovelace served as a fellow in the Program in Law and Public Affairs at Princeton University and will return to campus in the fall. 10. Jennifer Prusak and Inge Van der Cruysse joined the faculty, teaching the Non-Profit Legal Clinic and Lawyering in the Public Interest, respectively. 11. Victor Quintanilla served as a fellow in residence in the 2015-2016 academic year at the Center for Advanced Study in the Behavioral Sciences at Stanford University, only the second IU professor to be named. He returns to the Law School in the fall. 12. David and Susan Williams visited Thailand and Burma to discuss the national cease–fire with insurgent groups. 13. Teaching awards were presented to Dan Conkle (Wallace); Amy Applegate, Gina-Gail Fletcher, and Charles Geyh (Trustees); and Tim Morrison (Adjunct). Carwina Weng received the PILF/Len Fromm Public Service Award. 14. Charles Geyh received the Gavel Award, and Aviva Orenstein delivered the annual last lecture.

major lectures and conferences at the law school

1. Overall US News ranking improved to 25th from 34th. 2. International, tax, and IP programs were ranked by US News as 18th, 20th, and 23rd. 3. Inaugural Wintersession was launched, offering seven intensive one-unit courses at no additional cost to students; 1Ls will be invited to participate in January 2017. 4. Open Classrooms Week invited professors to sit in on their colleaguesâ&#x20AC;&#x2122; classes offer feedback. 5. A record 22 Stewart Fellows were appointed; Vietnam was added to the list of participating countries. 6. The International Programs Office and Career Services Office introduced a professional development series to provide graduate students with job development skills. Fourteen students earned a certificate under the program. 7. Graduate Legal Studies introduced specialty tracks in five areas of study. 8. New initiatives, including a faculty position, were created to expand the range of domestic externships and to develop an accompanying curriculum pursuant to new ABA standards. 8. Student Affairs offered enhanced support for bar exam preparation. 9. The Jerome Hall Law Library held Welcome Week and offered a summer research assistant program. 10. Baier Hall Presents series invited students from Jacobs School of Music to perform classical selections in the lobby during the Friday noon hour. 11. Budget tracking and staff performance management were implemented.

Looking backward helps inform and build on the future. With that in mind, here is a partial listing of the Law School’s achievements over the past several years. Since December 2007, the school has: 1. Hired 14 new and diverse faculty — including five in the past two years —

with expertise in specialties that today’s new lawyers need the most, including

and five engineering schools in the US, and exchange programs with more than

legal profession; developed certificates in cybersecurity with the School of

Informatics and the Kelley School of Business.

summer externships in firms, corporations, and non-government organizations in

eight countries around the world, a unique experience enjoyed by nearly 100

students since the program’s inception.

5. Expanded the range of domestic externships available, from county

organizations and the judiciary.

inmates, immigrants, tenants, victims of domestic violence, and members of the

7. Created new initiatives to help students find their first jobs in the profession:

interviewing in Chicago and Washington, DC; a steering committee of young

alumni to help graduates get settled; and networking events in major cities around

8. Launched an innovative first-year course on the legal profession, which

and career interests, and an upper-division leadership course.

9. Launched Wintersession, which exceeded initial expectations and is

10. Benefited from the volunteer support of more than 1,000 alumni and friends

11. Raised more than $100 million in support of the school’s people and

Inc. for faculty support; $35 million from Mickey and Janie Maurer for student

scholarships; and, in May 2015, $20 million from Lowell Baier for facilities Indiana University Maurer School of Law: The Year in Review, 2015-16

Indiana University Maurer School of Law: The Year in Review, 2015-16