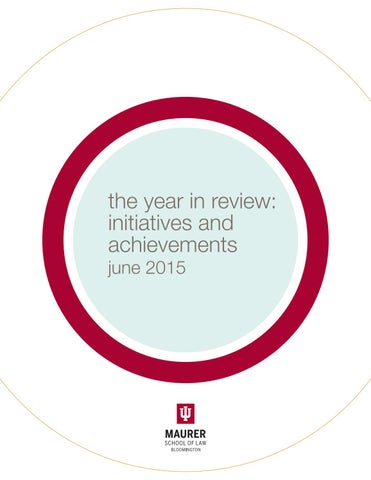 the year in review: initiatives and achievements june 2015

the year in review: initiatives and achievements june 2015

Listed below is a sampling of the law school faculty’s scholarship, recognition, and other achievements during the 2014-15 academic year. 1. Ashley Ahlbrand was selected to participate in the Writers-in-Residence Program for Ms. JD, a non-profit organization for women in law school and the legal

positions. Bell was quoted extensively in the media during the Ferguson

crisis. Weeks’s appointment was the first clinical chair in the school’s history.

and Broughman was appointed to serve as associate dean for research

6. Kevin Brown published his second academic book, Because of Our Success:

The Changing Racial and Ethnic Ancestry of Blacks on Affirmative Action.

7. Hannah Buxbaum continued her work as an advisor on the development of the

American Law Institute’s Restatement (Fourth) of Foreign Relations and was

8. Fred H. Cate was named one of top 30 technologists, transformers, and

trailblazers by the Center for Digital Education. His work was cited more than 140

times in the media, and in more than 30 law review articles. 9. Laura Daghe, Sophia Goodman, Cynthia Reichard, and Rob Downey

10. Ken Dau-Schmidt wrote an amicus brief on Indiana’s right-to-work law and co- authored an amicus brief on the joint employer doctrine under the NLRA. 11. IU is showcasing many of the women on campus who are shaping the future of

the university. Linda Fariss and Lauren Robel were among the women initially

chosen for the project.

12. David P. Fidler served as visiting fellow for cybersecurity at the Council on

Foreign Relations, and was consulted nationally and internationally on the Ebola

14. Charles Geyh was a featured speaker at a joint House–Senate press briefing on

the Supreme Court Ethics Act of 2013.

15. Bill Henderson was ranked the most influential person in legal education by

16. Joe Hoffmann, on sabbatical in Asia, served as honorary visiting professor at

17. Sarah Jane Hughes served as the reporter for the Uniform Law Commission’s Study Committee on Alternative and Mobile Payments.

18. Feisal Istrabadi was named to the American Academy of Arts and Sciences. 19. Mark Janis and the Center for IP research filed amicus briefs in Kimble

book, Intellectual Property Rights in Plants (with Jervis and Peet) has been

20. Dawn Johnsen co-authored an amicus brief in the U.S. Supreme Court in

justices cited her brief in dissent.

21. Marshall Leaffer organized a major conference on law and the performing arts. 22. Leandra Lederman was named one of the top 10 most frequently cited tax

23. Tim Lovelace will serve as a fellow in the Program in Law and Public Affairs and

Princeton University in the 2015-16 academic year.

quarterly publication of the American Association of Law Libraries.

named distinguished lecturer by the Organization of American Historians, and

appointed as director of the American Bar Foundation beginning September 1.

27. Christy Ochoa’s film, Otra cosa no hay (There Is Nothing Else), was released

and selected for the Bogotá International Film Festival; she was appointed

28. Victor Quintanilla will be a fellow in residence in the 2015-16 academic

University, only the second IU professor to be named. He has also received a

29. Steve Sanders served as co-counsel on “The People’s Brief,” an amicus brief

in the same-sex marriage case before the U.S. Supreme Court. He was named

parliamentarian of the Bloomington Faculty Council. 30. Alex Tanford was appointed to the Seventh Circuit Rules Advisory Committee. 31. Tim Waters delivered 25 lectures and presentations, 12 of them in 11 foreign

countries, on topics such as the crisis in Ukraine and the independence

course, along with Career Choices, and the Exploring Careers for JDs

33. Susan Williams was presented with the 2014 Tracy M. Sonneborn Award for

outstanding research and teaching and delivered the Sonneborn Lecture.

Fifty-six conferences lectures, and workshops were held during 2014-15. Series and Endowed Lectures 1. Brown at 60: A series of lectures and panels commemorating the 60th anniversary of the historic decision in Brown v. Board of Education. a. Inaugurated with the Jerome Hall Lecture: Mark Tushnet (Harvard Law) on “Parents Involved and the Struggle for Historical Memory.” b. Harris Lecture: Julian Bond on “The Broken Promises of Brown.” c. Center for Law, Society, and Culture hosted Guy-Uriel Charles, the Charles S. Rhyne Professor of Law (Duke) on “The Last War: The End of Racial Equality in Three Moves.” d. CLSC also hosted Angela Onwuachi-Willig (Iowa Law) on “The Unspoken Harms of Racial Segregation and Discrimination: What Brown Failed to Say.” e. John Dittmer (DePauw) spoke on “School Desegregation in the Heart of Dixie: Mississippi Then and Now.” f. American Promise and excerpts from Eyes on the Prize were screened, the latter with an introduction by Mr. Bond. 2. Stewart Lecture: Paul Secunda (Marquette) spoke on “The Behavioral Economic Case for Paternalistic Workplace Pensions.” 3. Fuchs Lecture: Jerry Kang (UCLA Law), on “Intending Equality: How Psychological Science Should Inform the Law.” 4. Snyder Lecture: Marc Weller (Cambridge, Lauterpacht): “Can Law Stop War?” 5. China Law Forum and dedication of Academy for the Study of Chinese Law and Comparative Judicial Systems.

1. Tax, IP, international programs were ranked by US News as 16th, 20th, 23rd. 2. Winter intersession was planned and approved for winter 2015-16. 3. Center on the Global Legal Profession named a record 18 Stewart Fellows,

bringing total to nearly 80 in seven countries since 2010.

4. Dean’s Writing Fellows were established as part of legal writing program 5. Graduate certificate programs launched, with plans to offer in fall 2015. Initial certificates will be offered in information privacy law and policy and cybersecurity

7. Conservation Law Clinic was tied more closely to the school, with Bill Weeks as

8. NSA and the U.S. Department of Homeland Security continued designation of IU

as a Center for Academic Excellence in cyber defense.

peace talks and meeting with women’s groups, respectively, in June 2015.

10. Center on the Global Legal Profession completed work under a three-year

Ford Foundation grant on the study of the lower courts in India.

11. Dean’s Advisory Council was created to advise the dean on school-related

2. Ben Holt and Evan Weaks advanced to the national semi-finals of the Giles S.

team participated in The Sim at Georgetown Law.

were recognized for years of service to the law school.

Looking backward helps inform and build on the future. With that in mind, here is a partial listing of the law school’s achievements over the past several years. Since December 2007, the school has: 1. Hired 13 new and diverse faculty — including five in the past two years —

with expertise in specialties that today’s new lawyers need the most, including

and four engineering schools in the U.S., and exchange programs with more than

summer jobs in firms, corporations, and non-government organizations in

seven countries around the world, a unique experience enjoyed by nearly 80

students since the program’s inception.

5. Expanded the range of domestic externships available, from county

organizations and the judiciary.

inmates, immigrants, tenants, victims of domestic violence, and members of the

7. Created new initiatives to help students find their first jobs in the profession:

interviewing in Chicago and Washington, DC; a steering committee of young

alumni to help graduates get settled; and networking events in major cities around

8. Launched an innovative first-year course on the legal profession, which

and career interests, and an upper-division leadership course.

9. Benefited from the volunteer support of more than 1,000 alumni and friends

10. Raised more than $100 million in support of the school’s people and

Inc. for faculty support; $35 million from Mickey and Janie Maurer for student

scholarships; and, in May 2015, $20 million from Lowell Baier for facilities Indiana University Maurer School of Law -- The Year in Review: 2014-15

Indiana University Maurer School of Law -- The Year in Review: 2014-15